The buzz on deforestation and vector-borne diseases in the Amazon 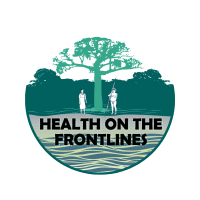 Getting comfortable on my mat, after day of field work on the frontlines of deforestation in the Ecuadorian Amazon, I felt confident in my conviction that none of those mosquito bites had given me malaria. Malaria is not endemic in this part of the Amazon. But, I had spent my day in clearings. And, deforestation, so I had read, provides ideal habitat for the vectors of these infectious diseases. My head began to buzz, as if the mosquito had gotten inside my brain. Could malaria emerge in this area as a result of rampant forest clearing? And what would be the impact on the health of the indigenous populations living here?

A vector-borne disease is a parasite, virus or bacteria (the pathogen) that uses an otherwise innocuous animal (the vector) as its means of moving from one victim (the host) to another. This set-up is inherently complex. You see, on the one hand you have the pathogen, with its likes and dislikes. On the other hand, you have the vector, which in many cases is the mosquito. Then on your right foot you have the human, and no one needs to tell you that we live in all kinds of conditions. Then, finally, on your left foot, you have land-use patterns – not only deforestation, but agriculture, hunting, secondary growth, etc. and, notably, the stagnant water bodies that come along with them. 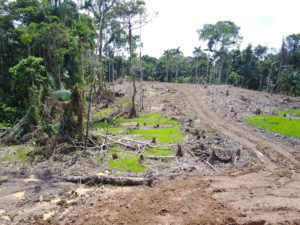 Small, yet abundant, pools of stagnant water created by land clearing, such as those at bottom left, are ideal breeding spots for many vectors

This last factor has a huge impact on mosquitoes’ breeding habitat and hence their abundance and species composition (Norris, 2004). Confounding the relationship between vector-borne diseases and deforestation are a slew of other factors, such as socio-economic conditions and climate change.

Vector-borne disease incidence and deforestation in the Andean Amazon 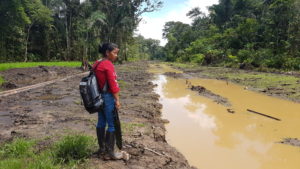 Construction of oil infrastructure, such as this pipeline, leaves optimal vector habitat in its wake

Ecuador, are among the highest in the world, and the frontier is pushed further and deeper into pristine rainforest every year, driven primarily by oil-industry infrastructure. Land-use change has been credited with the (re)emergence of vector borne diseases in the Andean Amazon. Malaria was considered eliminated from the Napo basin, Ecuador, in the 1970s before large-scale clearing, but has since re-emerged (San Sebastian et al. 2000), especially along the border with Peru (Llangarí-Cujilema et al., 2016). Along the Iquitos-Nauta road in Peru, deforestation was found to promote the presence and biting rate of Anopheles darlingi, a common mosquito vector of malaria (Vittor et al. 2006; Vittor et al. 2009). In Loreto department of the Peruvian Amazon, the emergence of chloroquine-resistant Plasmodium falciparum, another mosquito parasite, has been associated primarily with small pools on cleared land, fish farms, and areas of poor sanitation (Roshanravan et al. 2003).

Leishmania, acquired through the bite of infected female sandflies, has been found to be highest around houses and close to coffee or cacao plantations in the Andean Amazon (Richard Davies et al. 2000). In the Ecuadorian Amazon, Aguilar et al. (1999) have documented the advent of endemic regions of Chagas disease, spread via the ‘kissing bug,’ while Patz et al. (2000) explain that the emergence of this disease is related to uncontrolled deforestation and colonization, which simultaneously eliminates wild hosts and places humans in contact with the protozoa species responsible for the disease: Trypanosoma cruzi. A similar mechanism could be behind the upsurge in hepatitis and an outbreak of rabies in the Peruvian Amazon both of which are associated with vampire bat bites (Augusto Lopez et al. 1992; Echevarria and Leon 2003). An investigation of a yellow fever outbreak among military personnel working in Ecuador along the Peruvian border determined that clearing forest was a major factor in transmission of the virus (Izurieta et al. 2009).

For millennia, these pathogens existed in the wild infecting a variety of animals. Their prey included both “dead-end hosts,” defined as animals from which the pathogen cannot escape to humans, and hosts which enable the pathogen to “jump” to humans, who are an “accidental host.”

In 1914, Andrew Balfour got wind of traditional ecological knowledge among Trinidadians which would prove key in understanding the transmission of yellow fever, “the old negroes there say they can always tell when there is going to be an epidemic of yellow fever in the island owing to the fact that prior to its appearance the red howler monkeys are found dying and dead in the High Woods.” (Balfour, 1914, p.1176) Balfour then coined the term ‘the silent forest’ as a harbinger of the fever to come. This is a case in which the yellow fever pathogen, transmitted through infected mosquitos, “jumps” from its natural host, the howler monkey, to an accidental host, humans. 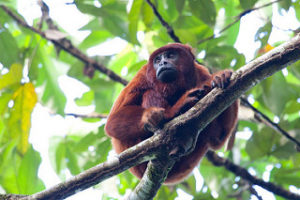 An extension of this line of thinking has it that as “immunologically virgin populations” (aka colonists) come more into contact with forests they insert themselves into the lifecycle of the pathogen; therefore, intact forests, which constitute reservoirs of the natural host, situated near human settlements would increase rates of vector-borne diseases, such as malaria (Valle and Clark, 2013).

This postulate has been hotly debated (as hotly as a subject can be debated in a volley of theorems and evidence) (Hahn et al. 2014; Valle, 2014) and led to a review of the literature co-authored by both sides of the debate (Tucker-Lima et al., 2017). It turns out that most studies do point to a positive association, but the link between forest clearing and malaria is not clear cut. Of the 47 studies, the better part, 32%, determined that deforestation contributed to malaria, 11% found that deforestation protected people from malaria, 26% saw no link and the remaining 31% didn’t directly examine the relationship between forest cover and malaria (Tucker-Lima et al., 2017). What the authors agreed upon is that the choice of methodology, particularly the measure of forest cover and malaria, determine the results, and that context matters so much as to make some circumstances incomparable. 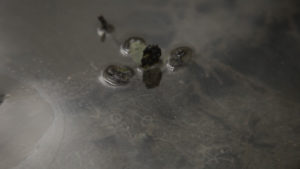 Puddles like these provide food and perfect temperatures for mosquitoes

A more recent review determined that the type of mosquito which preys specifically on humans proliferates in clearings owing primarily to the stagnant puddles that forest clearings create, increased temperatures, abundance of larvae food (algae) and lack of predators (Burkett-Cadena and Vittor, 2018). Indeed, it is logical that a species specialized in biting humans would adapt to disturbed environments, since this is our forte.

The deadliest vector-borne disease, malaria, responsible for 400,000 deaths per year (WHO, 2017) and generating the lion’s share of research (Chaves et al., 2018, Santos and Almeida, 2018; Austin et al. 2017; Rosas-Aguire, 2017, Laporta et al. 2013), is largely absent from the Ecuadorian Amazon, but the most prevalent mosquito-borne virus, dengue, is thriving, with over 14,000 cases reported in Ecuador in 2016 alone (PAHO, 2017). Both Dengue Fever and Chikungunya are considered emerging (or introduced) infectious diseases in the Americas and are thought to have “exploited deforestation for secondary epidemiological cycles, which increased at the forest edge until the virus was able to adapt to secondary hosts and expand globally,” according to Richard Kock. Some of the most-talked about emerging vector-borne diseases have also recently been linked to deforestation: lyme disease in the United States and Zika in Brazil.

Dying and dead in the path of the pathogen

So, by the end of this journey through the scientific literature on links between deforestation and vector-borne diseases, the buzzing in my head slowly gave way to the eerie rumble of howler monkeys a good distance from where I lay in my tent-cum-mosquito net. My befuddlement subsided into a tenuous understanding of the complexities of this delicate balance between pathogen, vector, host, and environment. Perhaps – in the end – a common message that both of the vying camps could rally behind would be “don’t put yourself in the path of the pathogen by clearing forest.”