Making the Glasgow Declaration work for people and forests: 3 steps for success

World leaders made headlines in Glasgow last week with new commitments to halt deforestation and invest resources in frontline Indigenous communities. Any and all hope of reaching the Paris climate goals and averting worst-case climate scenarios require safeguarding forest landscapes, but a track record of high profile pledges languishing unimplemented has given good reason for skepticism.  In 2014, world leaders made similar commitments in the New York Declaration on Forests, pledging to halve deforestation by 2020. Since that time, deforestation has continued apace, and parts of the vitally important Amazon rainforest have now made the long dreaded shift from carbon sinks to sources of emissions of themselves. With the looming threat of the Amazon near the tipping point of switching from rainforest to savannah, the stakes have only increased.

At the very least, these recent commitments signal a growing understanding that the status quo is not sufficient, that greater action, political resolve and resources are needed. But it does beg the question of what is different now, and what lessons have been learned in recent years that will give the Glasgow Declaration hope of a different, more successful fate. The Glasgow declaration was underpinned by commitments to channel $19 billion in public and private funds towards protecting forests, of which $1.7 billion USD is dedicated for Indigenous peoples and local communities. That is welcome and needed news, but to make real change, financial commitments need to translate into new resources that reach actionable investments in solutions. High-level financial commitments at the climate talks have tended to get mired in bureaucratic obstacles, double-counting and fail to reach those who can deliver results. It’s not yet clear how these commitments will reach communities who need resources nor how resources committed will shift policies that have relied on forest destruction.

As much as past failures invite skepticism, the stakes have simply become too high to abandon hope. Tropical forests now teeter on the precipice of a dangerous and irrevocable tipping point. Indigenous peoples have been on the frontlines, often laboring in obscurity, without the support they need to make change at the scale they are capable of delivering. As the climate talks wind down, and we get to the hard work of making good on promises made, here are three concrete, immediate steps that can be taken to make the Glasgow Declaration a success where others have failed.

Land rights for Indigenous peoples offers a cost effective, immediately scalable solution, and big investments are capable of delivering big results quickly. The data is clear, and it has been for some time: when the rights of Indigenous Peoples are recognized and secured, rates of deforestation are lower and carbon stocks are higher than in forests managed by others. The world over, Indigenous movements have called for greater investment in efforts to secure formal title to their lands. While new commitments have been made over the last decade, resources have been slow to reach communities who are engaged in often protracted battles with their governments to seek title, even as “bulldozers are at the gate.” That has to change and it has to change quickly. 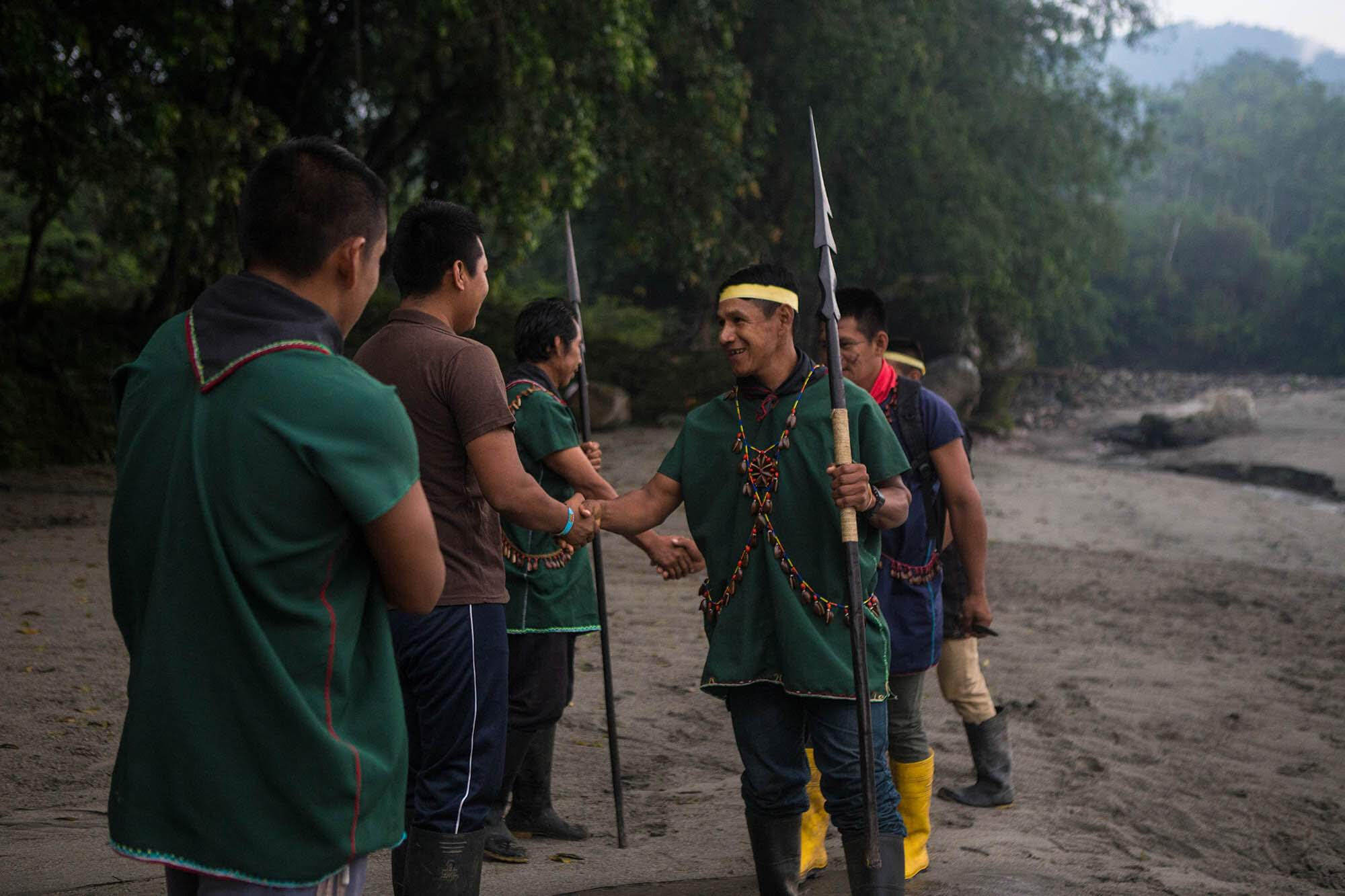 In Ecuador, the Indigenous movement is poised to secure massive gains in some of the most carbon rich and biodiverse forests in the world. Over the last 50 years, the government of Ecuador has unilaterally declared at least 1.4 million hectares of ancestral Indigenous lands as national parks, granting sole ownership to the government. Indigenous peoples who live in these areas are forced to negotiate weak, temporary land-use agreements with the government to access their territories. Even worse, these agreements do not prevent state interests from granting lands to either oil and mining companies, demonstrated most recently by the approval of oil drilling within the Yasuni National Park, which overlaps ancestral Waorani territory. Formal recognition of Indigenous peoples land title will provide a critical and additional layer of protection for the forests and carbon stored in these lands.

Indigenous peoples have not waited for top-down political commitments to continue their struggle to protect their lands and safeguard the climate. Over the last several years, Indigenous peoples have created an unprecedented window of opportunity to make dramatic and long-lasting changes to policy frameworks that privilege natural resource extraction over Indigenous guardianship and climate protection. Resources pledged to implement the Glasgow Declaration must support these urgent struggles in the near term.

The Ecuadorian Constitutional Court is poised to create unprecedented new jurisprudence on Indigenous peoples’ right to decide what happens on their lands and territories. In early 2020, the new progressive-leaning Constitutional Court of Ecuador selected the Sinangoe and Waorani court rulings (both brought with legal support from Amazon Frontlines) for review out of thousands of cases, setting up the country’s first real opportunity for national jurisprudence on indigenous rights to Free, Prior and Informed Consent (FPIC), and the Rights of Nature as applied in Indigenous territories. The outcome will determine whether these constitutional rights exist only on paper or are actually applicable in practice. 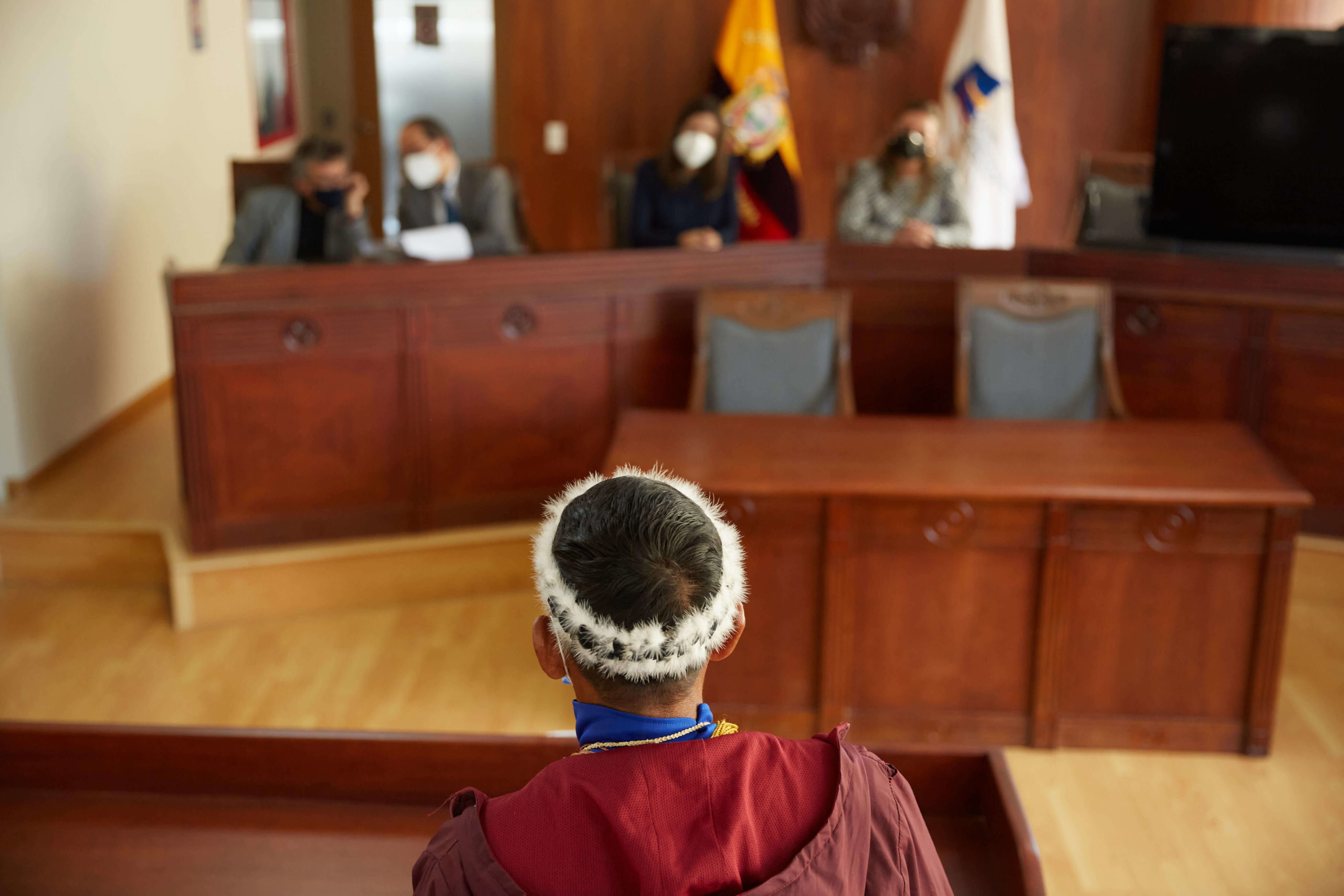 Free, Prior and Informed Consent (FPIC) is a vital tool for communities to resist planned extraction on their lands. The rights of indigenous peoples are widely recognized constitutionally and internationally. However, the effective implementation of international legal norms and Constitutional obligations is precarious, as governments continue to promote laws and policies that promote an economic development model based on mining, oil, hydroelectric energy and forestry exploitation. While many indigenous communities enjoy some form of recognition of collective tenure to their lands, the Government of Ecuador retains subsurface rights and continues to grant concession allocations to commercial actors on indigenous-held lands for extraction in violation of their fundamental right to free, prior and informed consent. Increasing protections for Indigenous peoples’ rights to control their lands could safeguard over 7 million hectares of intact rainforest in Ecuador.

The success of the Glasgow Declaration hinges on whether it successfully catalyzes much needed course corrections away from national development policies premised on “extraction at all costs”. Many countries are facing not only persistent sustainable development challenges, but are now also facing added economic crises arising from the current global health pandemic. The Glasgow Declaration comes at a critical time when many countries are seeking innovative ways to rebound from the COVID health and economic crises. The signatories to the Glasgow declaration, which covers over 90% of global forest area, have committed to “​​ensuring robust policies and systems are in place to accelerate the transition to an economy that is resilient and advances forest, sustainable land use, biodiversity and climate goals.” That means that forest countries must re-evaluate existing policy frameworks that do not align with those goals, and certainly means that signatory countries should not pursue new policies that run counter them.

Just months prior to signing this declaration, President Lasso in Ecuador issued Executive Decrees to massively expand new oil and mining extraction, threatening millions of hectares of pristine rainforest and the physical and cultural survival of Indigenous nations. The decrees are part of the new Presidential administration’s public policy strategy to address the country’s crippled economy and its colossal foreign debt by doubling down on extractivism and the exploitation of nature. If implemented, Executive Decrees 95 and 151 will radically transform the government’s policies on oil and mining to favor industry and attract foreign investment. 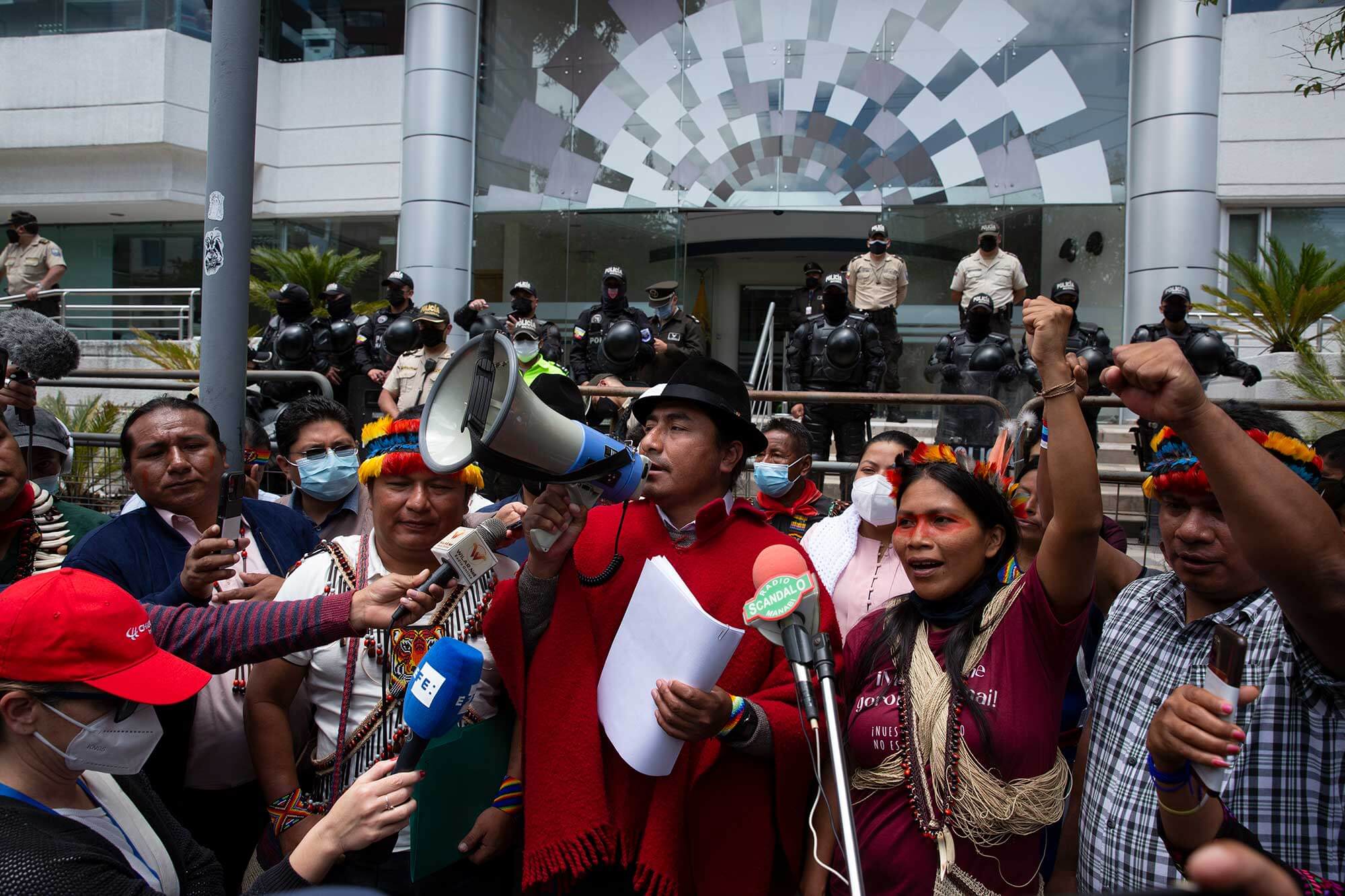 On October 18th, 2021, hundreds of Indigenous elders, youth, and leaders arrived in the capital city of Quito, having journeyed from their communities deep in the Amazon rainforest, to challenge Executive Decree 95, which seeks to double the country’s oil production to one million barrels per day by deregulating the operational processes in the oil and gas industry. The decree will profoundly affect Indigenous rainforest territory, as almost all oil reserves are in the Amazon, and almost all untapped reserves are within Indigenous territories. The lawsuit, brought with the legal support of Amazon Frontlines, challenges what is a clear first step towards a Bolsonaro style plundering of the Ecuadorian Amazon. Additional suits against Executive Decree 151, which aims to relax environmental controls to fast-track the entrance of foreign mining companies in the Amazon, are anticipated in the coming weeks.

Leaders have an important window of opportunity to capitalize on political momentum for reform arising from these pledges to ensure that while the longer process of policy reform is initiated, new harmful policies are scrapped before they lock in untold damage to forests and people. The vast majority of mining projects are at auction or exploration stage, not production stage, and many new oil concessions have not been auctioned or broken ground yet due to indigenous resistance. World leaders should come together to review these policies and change course, or risk the same fate of earlier failed declarations.

Deputy Executive Director Kate joins the team with more than fifteen years experience and an exceptional track record in securing transformational change in protecting the environment and upholding communities’ rights. She has worked closely with Indigenous Peoples and local communities at the global and national levels to ensure their voices, experiences and aspirations are at the forefront of our collective advocacy. She joined the team to support strategic programmatic growth and organizational development, and to learn from Amazon Frontlines indigenous partners. Prior to joining Amazon Frontlines, she was Executive Director of International Rivers where she built upon the organization’s long tradition of working closely with social movements and indigenous organizations to protect rivers and the communities who depend on them. Kate also directed Forest Programs at the Environmental Investigation Agency (EIA), where she built and led a diverse team that substantially shaped both global and national forest governance reform processes, including successfully instigated high-profile enforcement actions on nearly every continent. She currently serves on the Advisory Board of Freshwater Life.