Analysis on the implications of popular, ethnic and rural mobilizations in Colombia

Widespread protests are now entering their third week in Colombia as the country grapples with a third wave of COVID-19 that has brought a collapsed health care system in the main cities of the country, new travel restrictions, curfews and the precarious implementation of a national vaccination program coordinated through the bilateral COVAX scheme.

As part of the national demonstrations sweeping the country, Indigenous peoples have organized a minga or march to demand respect for rights that have been historically denied to them. Indigenous peoples in Colombia face recurrent racism and stigmatization, and communities continue to suffer systematic violence and the dispossession of their ancestral territories. Colombia is home to 102 Indigenous peoples, of which thirty-nine have been declared at imminent risk of physical and cultural extermination as a consequence of the internal armed conflict and thirty-five of which face a high risk due to their demographic decline with less than 200 inhabitants. In addition, 242 indigenous leaders have been assassinated since the signing of the Peace Accords in 2016.

As part of the protests, the Indigenous movement has put forward an agenda with several key demands: justice for the impacts of violence caused by the armed-conflict and narco-trade, structural impoverishment, and the threat of dispossession of their ancestral territories; as well as respect for their fundamental rights as victims of the armed conflict; the recognition and affirmation of their autonomy and decision to remain in their territories as an essential condition to guarantee their survival; the State’s flagrant non-compliance with the Peace Accords; stopping the imminent reactivation of dangerous aerial spraying of coca-crops with glyphosate (otherwise known as Round-Up); the imposition of development models opposing the Indigenous philosophy of “Buen Vivir” (Good Living); and the violation of rights to self-determination and prior, free and informed consultation and consent.

Additionally, the Indigenous guardias, whose existence and work are synonymous with resistance, peace, collective struggle, and the real and effective protection of their communities and territories, have joined the frontlines of mobilizations in cities alongside young demonstrators protesting against unemployment, inequality and the consequences of forced displacement and poverty in the cities.

It is important to consider that the systems of guardia are autonomous strategies of resistance for the monitoring and control of Indigenous territories (with or without formal titles). They are a manifestation of legal pluralism, of proper law, of self-determination for the support and backing of the traditional, political and spiritual authorities of each Indigenous people. They are civil, peaceful bodies, which have the main function of caring for and defending life and culture. Today, they are mobilizing in the cities as a result of their communities’ mandate in an effort to denounce the deepening war in their territory, rising inequality and the socio-environmental effects and systematic violations of their human and collective rights. 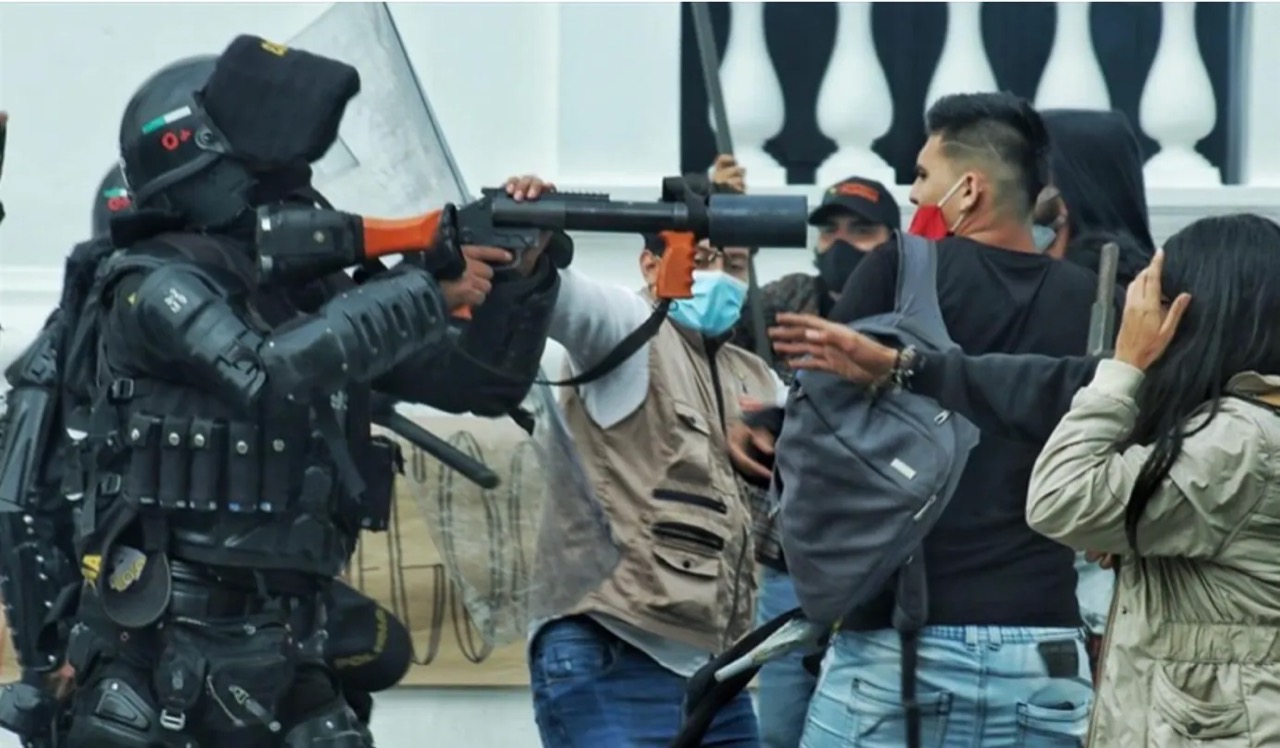 Demands for the government to build a fairer society have been met with police brutality and repression. Despite the existence of national and international normative tools to regulate the use of force by Colombia’s Mobile Anti-Disturbances Squadron (ESMAD) and the police force in the context of protests, serious human rights violations have been reported since the start of demonstrations at the end of April.

According to the “Defend Freedom Campaign” (Campaña Defender la Libertad), as of May 15th, 2021, 49 people have been killed at the hands of alleged unidentified state and/or “civil” actors; one young minor decided to end his life after being sexually assaulted by the public force; 578 have been injured in clashes between the national police and ESMAD; 37 have suffered vision loss; 87 have been victims of gender-based violence. At least 1,460 people have been arrested, some of whom have also denounced acts of torture and other cruel, inhuman, degrading treatment while in custody. Twelve raids have also been made, eight of which have been declared illegal, including arrests of human rights defenders. To date, at least 379 people have been reported as missing, and this figure is subject to review. The crisis in the country continues despite growing national and international condemnation of the militarized response and police repression against demonstrators.

Adding to popular outrage against these abuses, militarization, and killings, impoverished families throughout the country have been asking for but have not received an urgent basic income since the beginning of the pandemic in 2020 in order to survive the lockdown. 42.5% of Colombia’s population is already living in poverty, of which 15.1% is now living in extreme poverty. Alarming inequality continues to grow between the countryside and cities, a product of, among other things, the ongoing internal armed conflict. For the past sixty years, the armed conflict has claimed seven million victims, and adequate reparations or considerations have still not been made.

At the beginning of the national strike on 28th April, 2021, protestors marched in the streets with banners declaring that they feared the criminal right-wing government more than COVID-19 itself. At that time, the government was attempting to promote a controversial tax reform bill, which detonated social discontent. The reform would have seen taxes imposed on basic family goods and necessities, retirements and extra taxes on the middle class with hopes of curbing the country’s budget deficit. Yet the salary of a congressman (valued at $ 34,417,000 COP) is equal to 48 monthly minimum wages, showing again the stark inequality in the country. 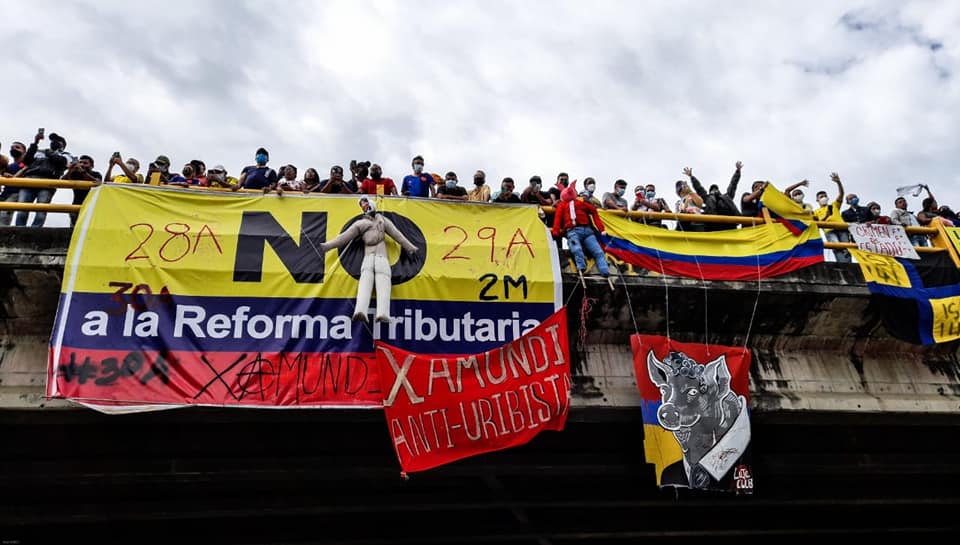 Even as the Minister of Finance resigned on the sixth day of protests, demonstrations continued and intensified. Protestors’ opposition to the privatization of healthcare and demands for a quality, free and universal education; and for the respect of life, dignity and territories were met with brutal repression, police brutality and abuses from the public force.

We at Amazon Frontlines express our deep concern over the Colombian government’s declarations that protestors have “terrorist” objectives, thereby justifying their excessive use of force against the population. We also express concern over the declarations of local authorities inciting civilians to rise up against the protestors, a clear signal to paramilitary militia groups with a long history of devastating violence in Colombia. This is not only a violation of human rights standards, but it is also an assault on all the victims of paramilitary violence in a country that has suffered the longest internal armed conflict on the continent.

Hate speech has been especially promoted by high-level officials such as the Minister of Defense, Diego Molano; mayors, like Carlos Maya, mayor of the city of Pereira,; and influential public figures such as former President Álvaro Uribe Vélez, who today runs the ruling political party. These figures have made statements which intentionally, consciously and voluntarily seek to project a biased image of the demonstrations and set fire to public demonstrations with a defense for ongoing genocide. These statements have sought to encourage members of the police force and civilians to act out against protestors, resulting in an alarming increase in the use of institutional violence, directly exercised by uniformed or undercover law enforcement officers and through the actions of individuals who have had the complicity or acquiescence of the State.

The arbitrary, violent and disproportionate actions of ESMAD and military forces go against the protocols, norms and international human rights standards relating to the use of public force in the context of peaceful social protest. The violence responds to a scenario of fear, confrontation and discrimination, and an attempt to impose a concept of security based on the fear of certain privileged sectors of the population, thereby justifying the repressive treatment of protests.

Growing concern over the increasingly violent events has been publicly denounced by various human rights organizations in Colombia and the international community, including the Inter-American Commission on Human Rights (IACHR) and its Office of the Special Rapporteur for Freedom of Expression, which have expressed “concern about stigmatizing and intimidating statements by state authorities, among which are particularly worrying those that classify protesters and victims as ‘terrorists’, ‘enemies’ or ‘criminals’. Declarations of concern have also been made by the Office of the United Nations’ High Commissioner for Human Rights, and more than 650 Civil Society Organizations from around the world. 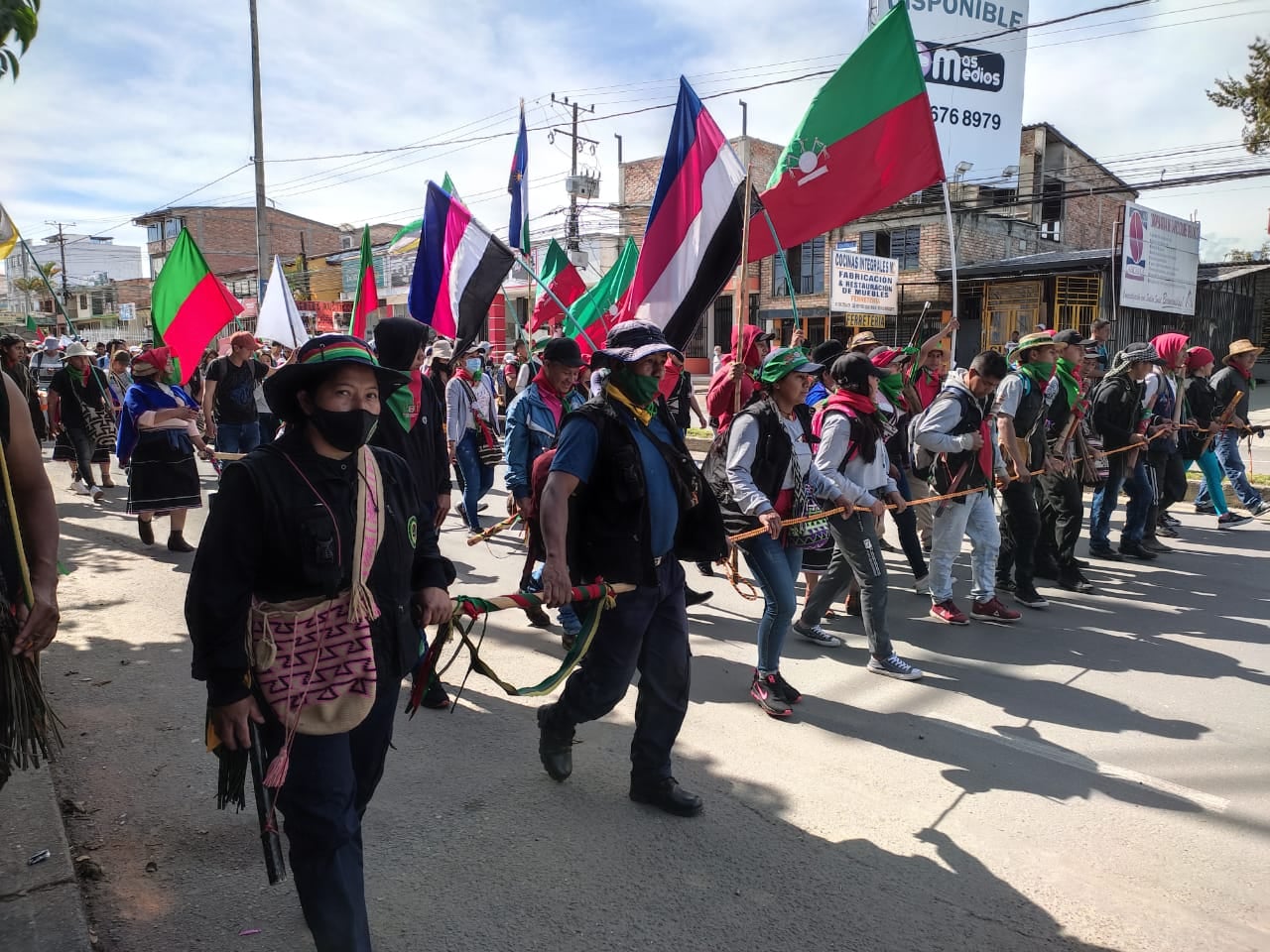 Indigenous peoples mobilize in the city of Popayán. Photo Courtesy of the Regional Indigenous Council of Cauca – CRIC

Despite the fact that social mobilization and peaceful protest is a political right that, as a pillar of a democratic system, has been explicitly considered as a fundamental part of the Peace Accords, since April 28th this guarantee has been completely breached by the Government of Colombia. Brutal armed repression, judicial persecutions, attempts to quash protests through road blockades and the State’s ignorance of the structural demands of civil society have fueled unrest and deepened a critical situation for human rights in the country.

In recent days, the south of the country has been the protagonist of both barbarism and hope. Cities such as Cali, Popayán, Yumbo and Bogotá have been the epicenter of attacks against peaceful mobilizations. The Indigenous Minga and members of the Indigenous guardia of the Regional Indigenous Council of Cauca (CRIC) have accompanied these mobilizations and documented protest through social media and alternative press, revealing evidence of armed attacks against protestors, sabotage by public forces and violent interception by armed third parties, and even the successful arrest and disarmament of members of the national police infiltrating the marches. 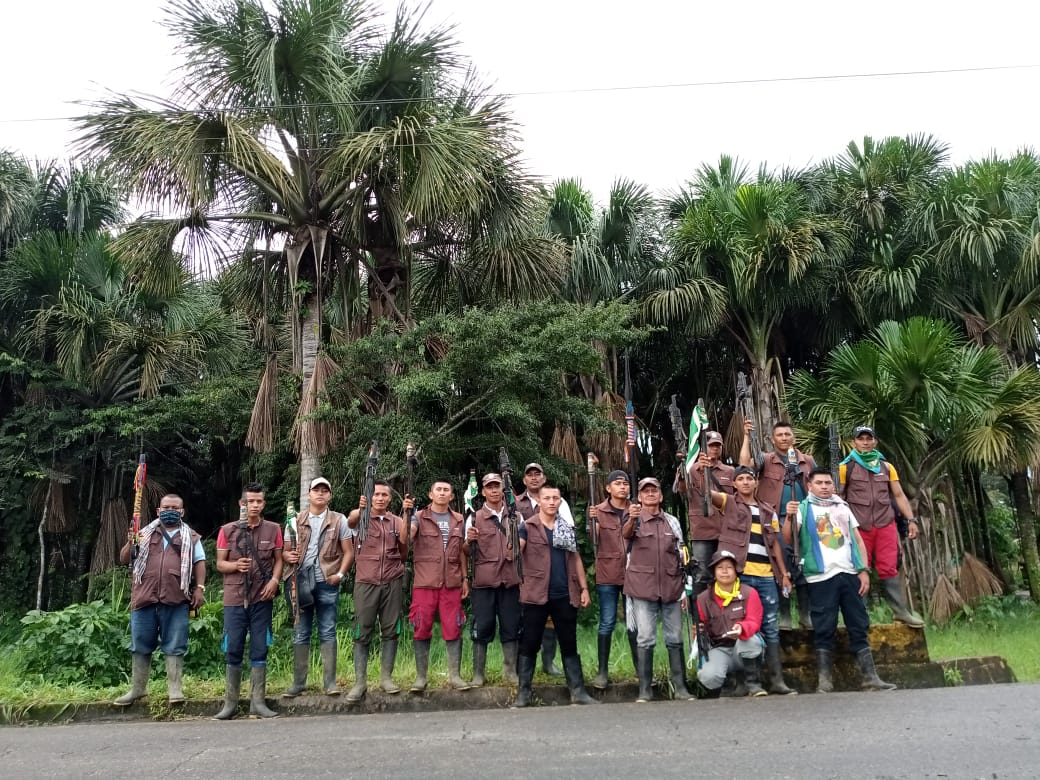 Members of the indigenous guard of the Buenavista Reservation of the Siona People, Putumayo,

In the Putumayo region, the Siona people of Buenavista, a cross-border  community whose territory is located along the Putumayo River between Colombia and Ecuador, has mobilized its traditional and political authorities and its indigenous guardia to peacefully participate in the national strike in the municipality of Puerto Asís, demanding respect for the Amazon; denouncing the impacts that continue without remediation as a result of fumigations with glyphosate and the risk posed by the resumption of what is essentially chemical war against the civilian population; the imminent physical and cultural extermination in which they find themselves; the pressure for the development of oil activity in the region and the lack of progress in the processes of restitution and territorial formalization.

With dignity, strength and courage, men and women of Indigenous peoples, the labor sector, young people, students and farmers have risen up to demand their right to peaceful protest and to try to build, through de facto means, a country that continues to resist armed violence and paramilitarism. As they sing in the streets: “¡El pueblo no se rinde carajo!” (“The people don’t give up! Damn it!”). Civil society in Colombia has grown tired of allowing oppression and injustice to go on unchecked.

May the wisdom of Indigenous peoples allow us to find paths toward a dialogue for transformation. May the serious violations of human rights being committed come to a stop immediately, and multilateral organizations and special international verification missions accompany the ongoing protests and the recent events that have prompted the mobilization.