for Rainforest Protection And In Solidarity Amidst Devastating Fires In Brazil, Bolivia and Paraguay

Quito, Ecuador — September 4, 2019 – As fires rage across the Amazon Basin, indigenous nations of Ecuador’s Amazon arrived in Quito to send a message to the Ecuadorian government: If indigenous lands and rights are not respected, the Ecuadorian rainforest will share the same tragic fate as Brazil, Bolivia and Paraguay. Indigenous peoples’ hold rights over 70% of the Ecuadorian Amazon, but government imposed projects for mining, oil, hydroelectric dams, and agroindustry have led to the highest deforestation rates in the entire basin.

Indigenous nations and federations joined forces with the Waorani and Kofan people to demand immediate action from congress, the Supreme Court and the Ministry of the Environment to respect indigenous rights to free, prior and informed consent and self- determination, and to enforce historic indigenous rights verdicts protecting hundreds of thousands of acres against gold mining and oil drilling.

Singing, dancing and raising their spears in the air, the indigenous nations of Ecuador’s Amazon sent a powerful message of solidarity with the neighboring tribes of Brazil, Bolivia and Paraguay and made clear that they would take action to avoid a similar fate. Over the coming month, indigenous organizations in Ecuador will be organizing a nation-wide march and actions in defense of their rights and territories.

“All over the Amazon we have to unite between indigenous peoples to defend our territories and demand that our rights are respected. Government, oil companies, miners, and cattle ranchers have no respect for the earth, nor for us. But together we will make them respect us, and in doing so, we will protect the rainforest and our global climate.”
Nemonte Nenquimo, Waorani Leader and President of CONCONAWEP

“We are explaining to the government, and showing the world, that extractivism in indigenous territories is a threat not only to the indigenous peoples that live in the forest, but for the entire planet. The world is burning, if we don’t act now, when will we?
Jaime Vargas, President of CONAIE

“The Amazon is at risk. Mining, oil, hydroelectric dams, and the agroindustries are attacking our way of life and our cultures. We are here so that the Ecuadorian government respects our rights and our lands. We will not permit the destruction, contamination or burning of our territories.”
Marlon Vargas, President of CONFENIAE

“Our community, the A’i Kofán of Sinangoe, stopped the deforestation that the Ecuadorian government approved along our river for gold mining. Indigenous peoples are the ones who protect the Amazon, not the State. Our recent victory in court is evidence of that, and that the world needs to support our struggles.”
Edison Lucitante, President of the A’i Kofan de Sinangoe community

“We are here because we won a historic court ruling last year protecting our territory from gold mining but it has not been complied with. We demand the government to comply with the ruling, the verdict should not just stay on paper, it needs to be applied. Our territory is still under threat, there are still invasions and there is still mining going on. Our rights as indigenous peoples must be respected. We are uniting with other indigenous nations; together we are stronger, and we are fighting.”
Omar Ramiro Umenda Lucitante, Vice-President of the Kofan community of Sinangoe

“The Amazon is hurtling towards a catastrophic ecological tipping point that threatens millions of species from every branch of the tree of life and imperils global efforts to stave off the climate crisis. The fires raging across the basin today represent a history-defining global call to action, and the message is: We must stand with indigenous peoples in their urgent fight to protect their way of life and their rainforest homelands. The future of the Amazon is fires and scorched earth if indigenous peoples’ land rights aren’t respected.”
Mitch Anderson, Founder and Executive Director of Amazon Frontlines

“We are facing grave threats to our territories. The State doesn’t respect us, it doesn’t guarantee our rights. We will continue to fight and we are also here to express our worry for our Amazon – the fires are destroying many forests. If our forests and our territories are lost, life will become impossible for us – and not just for us as indigenous nations, but for the whole world.”
Andrés Ruiz, Vice President of the Sapara nation 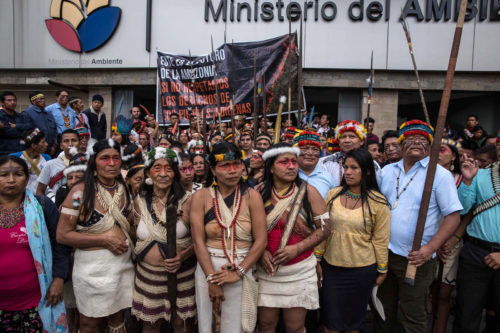 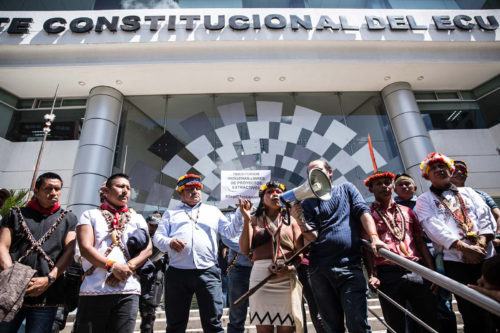 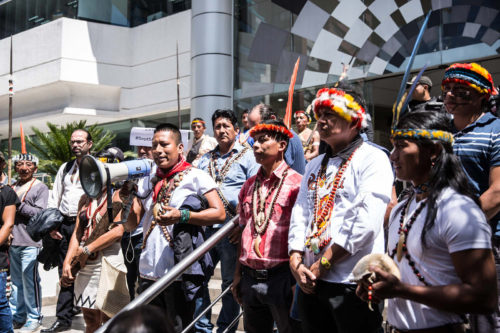 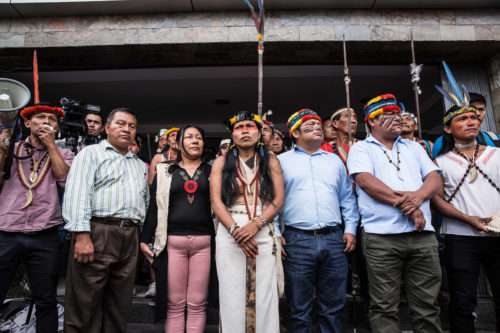 Communications Lead Born in the forest of Fontainebleau, Sophie was raised between France, the United States and the United Kingdom and began her professional career in the high fashion, media and contemporary art industries working across visual communications and journalism in Europe. In parallel, Sophie also launched her own media and magazines exploring and fusing alternative movements, art and environmentalism. After many dreams of the Amazon, Sophie moved from London to the Peruvian jungle in 2016 and began working with indigenous peoples demanding justice in the face of nearly half a century of oil exploitation. Sophie joined Amazon Frontlines and the Ceibo Alliance in 2018 and is honored to be part of this urgent struggle in protection of the Amazon, its peoples, beings and spirits, and to be at the service of Mother Earth.