“Without Unity, There Can Be No Triumph”: An Indigenous Voice on a Historic Victory Against Gold Mining In The Amazon - Amazon Frontlines

“Without Unity, There Can Be No Triumph”: An Indigenous Voice on a Historic Victory Against Gold Mining In The Amazon

On this Day of International Human Rights, Alex Lucitante, a young indigenous leader from the Kofan people, shares his experiences from the frontlines of a historic victory against gold mining in ancestral Kofan territory. From reviving ancient yagé ceremonies (also known as ayahuasca) to strengthen community resistance to using technology in the defense of their land, the small community of Sinangoe’s path to victory and their struggle ahead is one marked by a fusion of innovation and ancestry – and above all, unified determination to protect their rainforest home from extractivism. 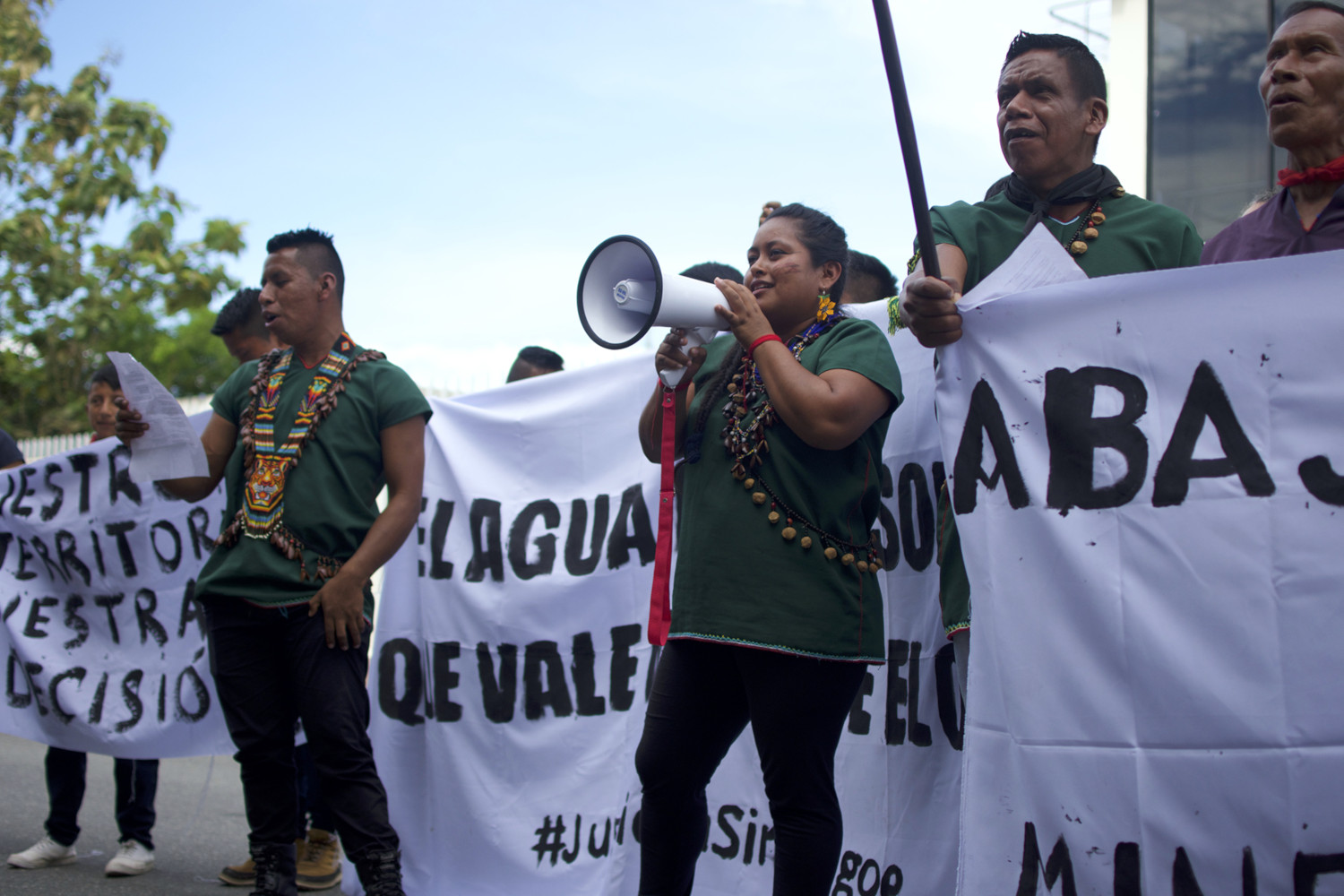 When Sinangoe’s victory happened on October 22nd 2018, I cried and felt so much emotion. It took a lot of sacrifice to get to that victory, which nullified 52 mining concessions on our ancestral territory that had been granted by the government in violation of our right to consent.

The community’s dream was what sparked this fight. Our territory gives us everything we need: it is our pharmacy, our supermarket. There lies our history, our roots, and the life that enables us to live in harmony. That is why it is so important for us to protect it, it is our home.

Mining threatened our territory. It threatened the river and the spiritual places which give us life and which teach us respect for life. For the Kofan people, the river is not just water and stones. To see a fish is to see food, and to see water is to see life in the river. If the rivers are contaminated, what will happen? In the spiritual world, when the spirits of the jungle leave us, everything else we have also gets lost. The community will no longer bother taking care of the river, because it won’t make sense. They will start working and buying things that are not from the territory, they will begin to dream with money and they will begin to destroy the territory.

“Mining threatened our territory, our rivers and the spiritual places which give us life”

Our ancestors taught us to fight with truth and respect. That helped us so much on this path. Beyond our spears, our crafts, our way of life, our language – yagé, or ayahuasca, is a deep part of our identity as Kofan. Sinangoe still does not appropriate what is proper to us. We were divided by the Evangelism or “civilization” which the Kukamas [outsiders] imposed upon us. They convinced our people that drinking yagé was diabolical. Our wisest elders were deceived and finally stopped drinking yagé.

So the youth of Sinangoe grew up without the knowledge of yagé – until this struggle began. With the community guard, we went to my father’s territory to drink yagé. We went to Siona territory, where some of the people have maintained the practice despite evangelization, and there we also drank yagé. From then onwards, some young people learned to prepare it and they now are drinking with the elders, ancestral wisdom-keepers. Then began the construction of the ceremonial house in Sinangoe earlier this year, when the community began the struggle in defense of its territory. First the struggle emerged and then the cultural recovery – and now all of this continues.

“Drinking yagé allowed for respect to grow amongst everyone, it strengthened our unity” 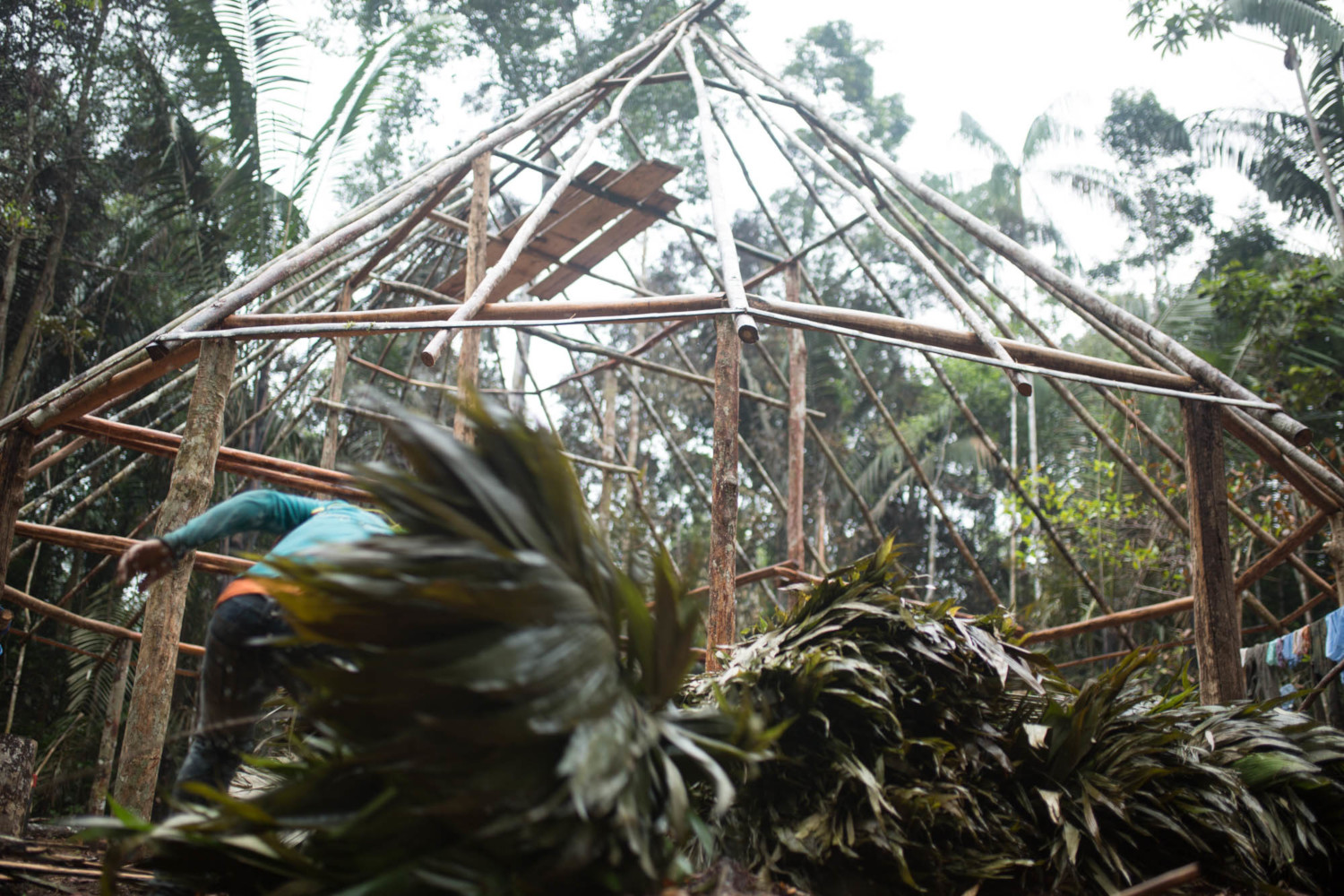 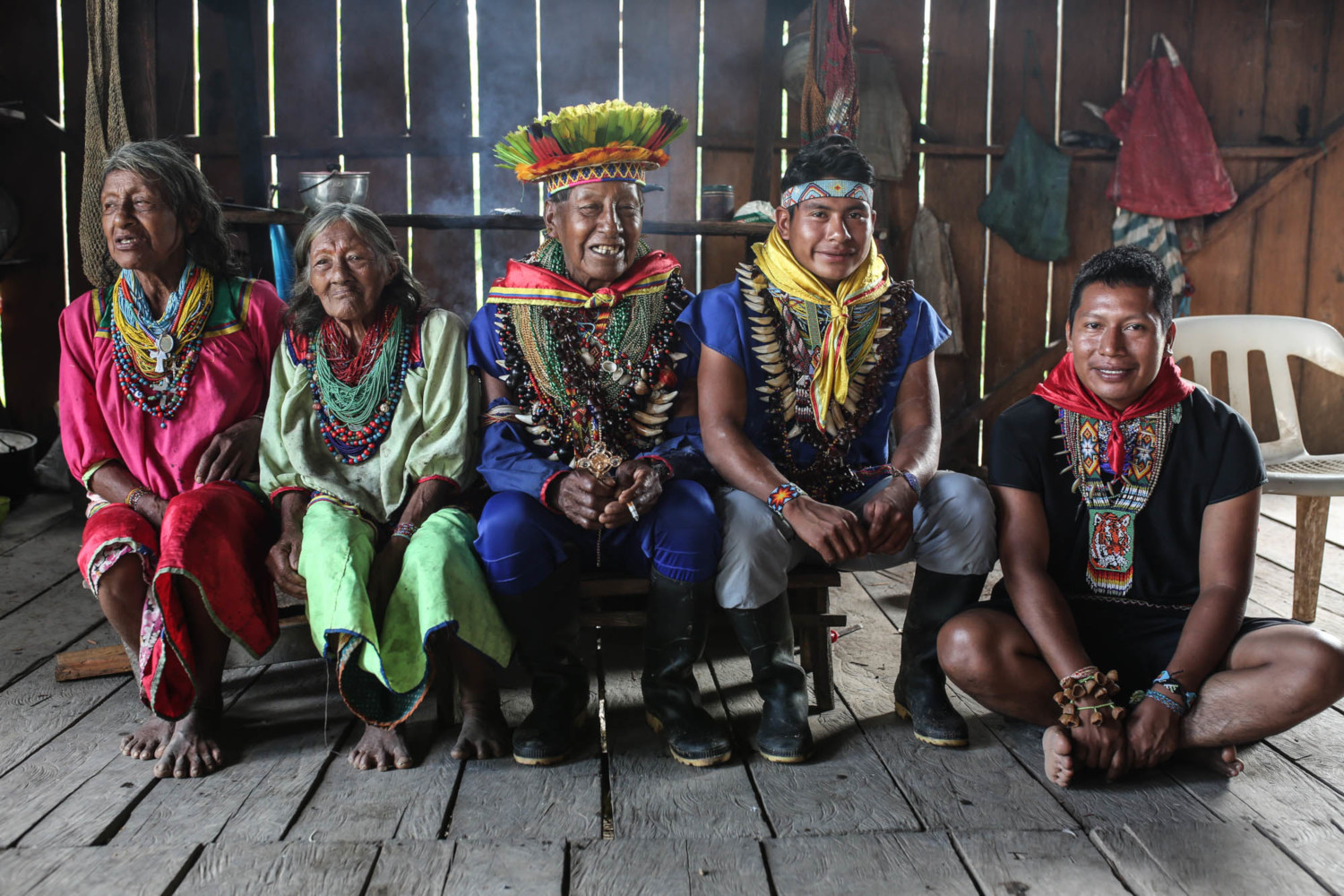 The main vehicle for this struggle was the unity of the community. That unity was built through hard work and difficult times because Sinangoe was previously divided by political issues, the personal interests of certain groups, and different ways of thinking. But it was not entirely divided: there was still this dream to remain united, to do something for the community and for the territory.

Drinking yagé made respect grow amongst everyone, it strengthened the unity. It made people understand that what is our is ours, and no one can take that away from us. Yagé helps you to understand your life but it is also makes you understand the life of the forest – when you hear its chants, its sounds, that is where there is life. You see mountains and you see that this is sacred land. It is where the spirit of the jaguar rests and wanders, and where the sound of the wind fuses to the forest, and this creates harmony so that everything can be well. We are not greater than the forest or our territories, we are equal, we are the same: this is the Kofan vision. And so through yagé, we become stronger on this path.

If we ask ourselves why Kofan territories or indigenous territories have been kept intact until today, and why they contain more land and biodiversity than anywhere else, it is because our ancestors cared for and defended our territories. The current community guard of Sinangoe is nothing new – it is something that has been a fact since the existence of the Kofan people; our ancestors were these guards. 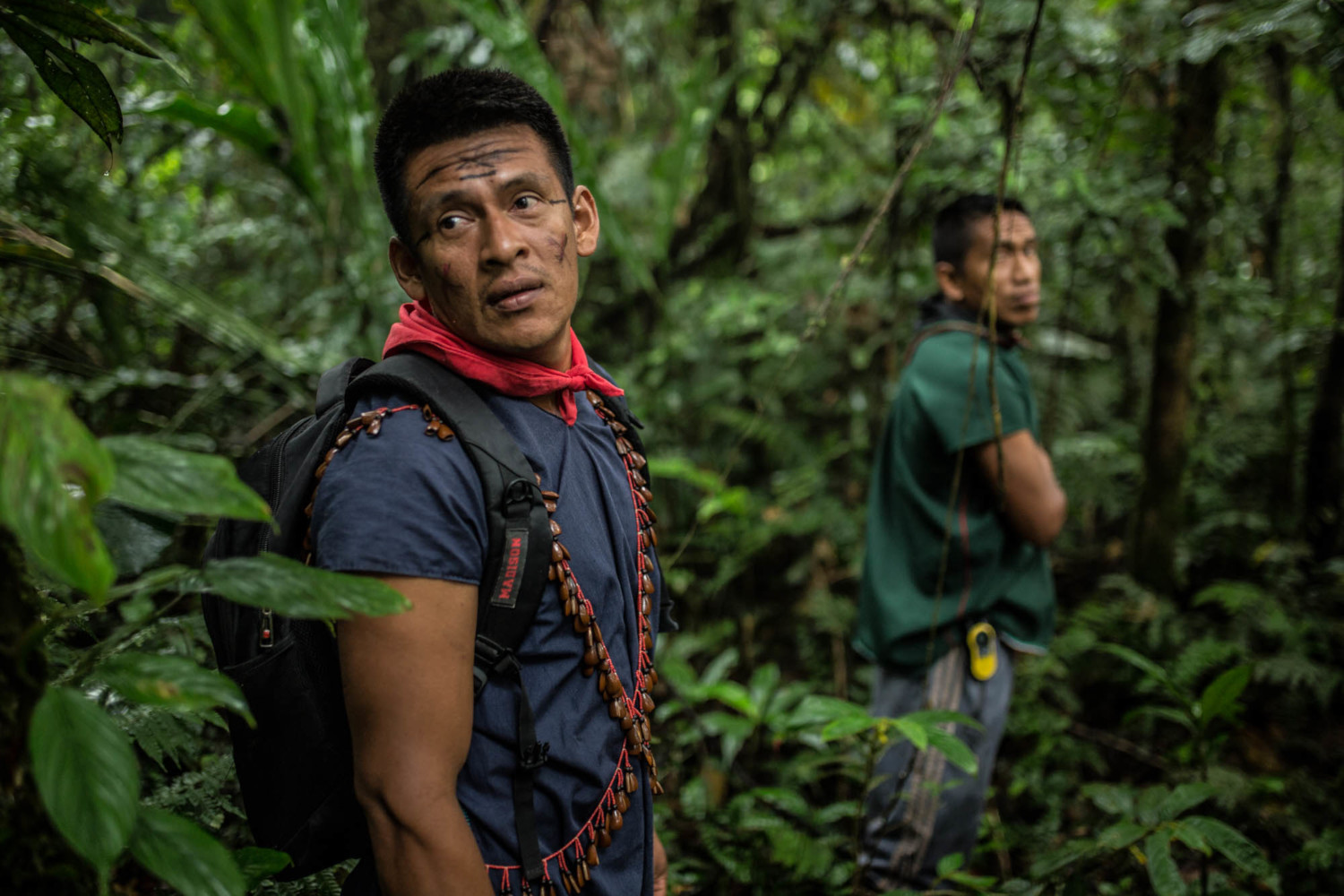 But during this process of struggle, in exercise of our right to autonomy and self-governance, we saw the need to formalize this guard on paper and create a law prohibiting activities that certain groups, companies or people were doing in disrespect of the community. The community’s voice was not being heard and the State was not guaranteeing our rights. For example, there were people putting shotgun traps to hunt animals in order to sell them, throwing dynamite, poison and all kinds of chemical substances into the rivers, dredging the territory and destroying mountains… So our ancestors’ mandate applied, to defend our ancestral territory through the means of a guard, by means of our warriors.

“The State must guarantee our rights to our territories”

Technology, paired with the guard’s ancestral knowledge of our territory and how to navigate the river and adapt ourselves in the jungle, was very important in the Sinangoe case. The camera traps and drones served to document and monitor what was happening in the territory. At first, there were threats towards our leaders – “if we see you Kofan here, we will take out our machetes, we will cut off your head” – that is how the miners threatened us. But with all the photographic evidence which Sinangoe collected through camera traps and drones, we were able to file a demand for an action of protection. The denouncement was made public before the authorities, and through the media we alerted the world about the changes that were happening in our territory, about the illegal invasions but also about the mining concessions granted by the Ecuadorian government without our consent. When this happened, investigations were opened, and from then those who threatened us remained silent. 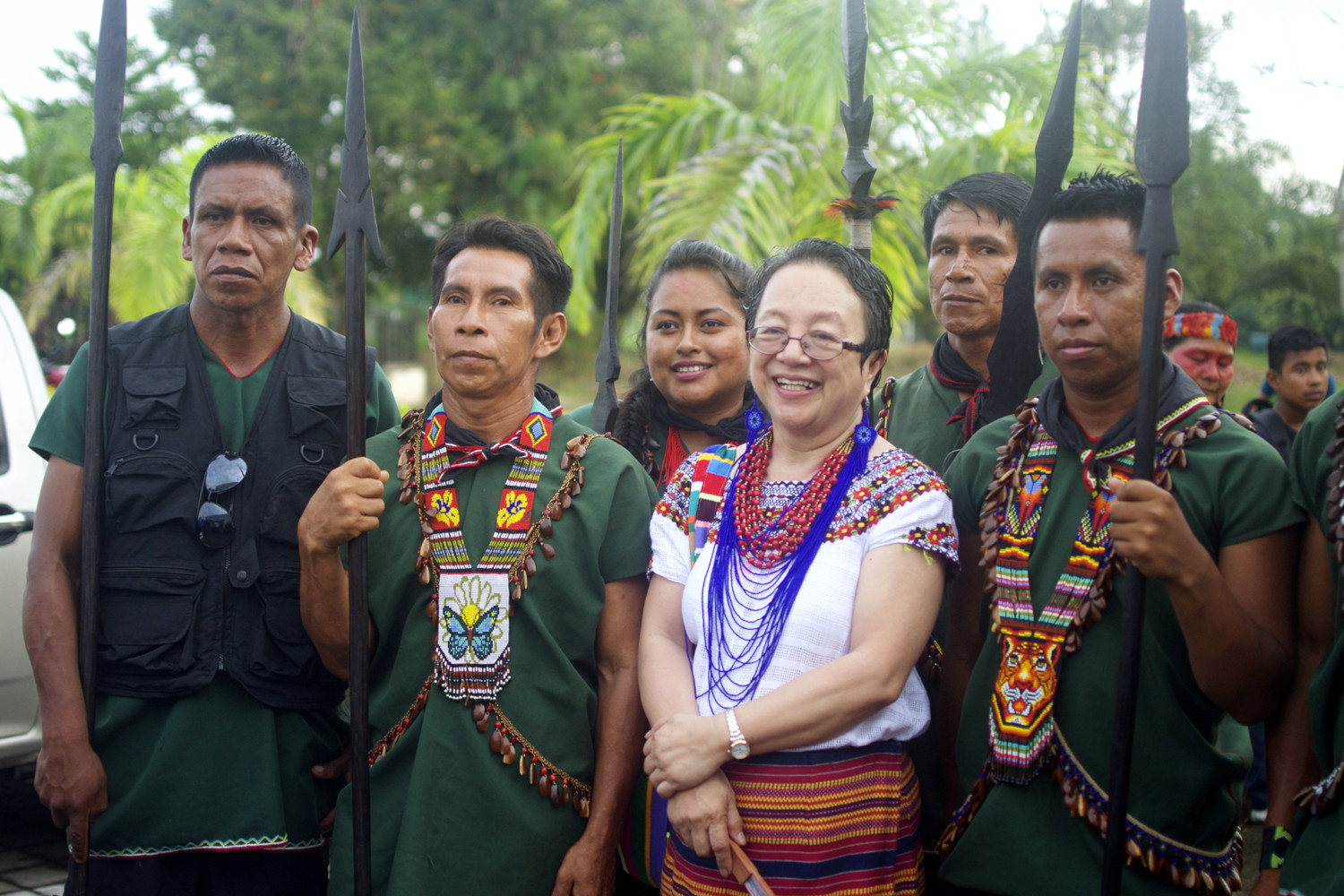 A few weeks ago, we met with the United Nations Special Rapporteur on Indigenous Rights during her visit to Ecuador. We explained how the State was not recognizing our rights to our territories as Kofan people, the State was violating our rights. We need the State to guarantee our rights through land titling. We also demanded that the State recognize the role of indigenous guards as guardians of ancestral territories and for the protection of the rainforest and biodiversity, because to this day, the State has been incapable of doing so. Instead, the State has accused us of being “paramilitaries”, “militia groups”, “accomplices of the miners”. But the Rapporteur met the guard to understand its structure and how it protects our territories: with respect, strength, and love in the heart.

Now the community is beginning a process to map out its territory, they will be walking long distances to gather evidence of sites of great importance in order to demand that the State recognize their territory through a property title. The State wants to have authority over these territories but they must respect our ancestry. With the case’s sentence and all the support and alliances that Sinangoe now has, we are confident that we will be able to secure this land title. And when we secure this land title, we will be stronger in our fight to guarantee our cultural and physical survival.

The struggle of Sinangoe doesn’t just represent the Ecuadorian Amazon. It also speaks to other countries – where indigenous peoples want to fight and confront these big issues but still feel lost because they do not really understand who they are as a people. In reality, we, indigenous peoples are subject to rights just like nature, so we must fight and defend who we are. When there is consciousness, as there is in the case of Sinangoe, people view who they are with pride and love. We raise our spears and say we are Kofan, and so what? It does not matter that we do not have the dream of the white man or of the extractivist to own a lot. We have the dream of our ancestors, which is the ancestral right to be who we are and live as we want to live. That is the message from Sinangoe to the world: get up, raise your voice, but always be united. Without unity, there will be no triumph. 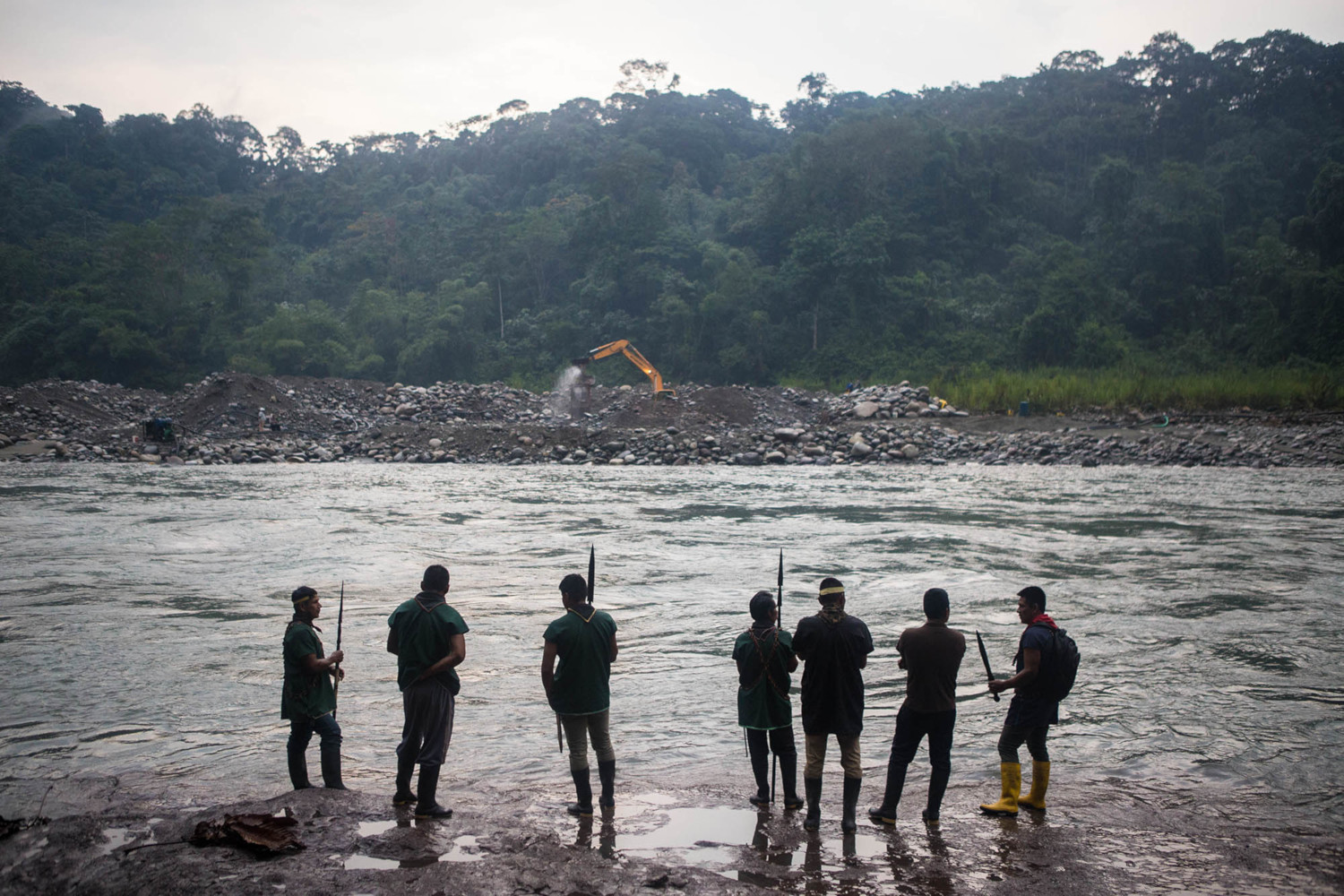