It is estimated that the Kofan (also written as Cofan, or A’I as they refer to themselves), numbered between 15,000 and 20,000 people before the arrival of the Spanish conquistadors. A brutal history of conquest, abuse, and disease followed.

Centuries ago, the Kofan people moved down from the foothills of the Andes Mountains to inhabit a large territory between the Aguarico River in the northern Ecuadorian Amazon and the Guamués River in southern Colombia.
The invasion of the extractive industry, colonization, and forced religious conversion took its toll on the Kofan, and they now number approximately 2,100 people living in a significantly reduced territory. Oil extraction has contaminated much of the Kofan’s lands and rivers, and oil-related health problems are prevalent in Kofan communities. 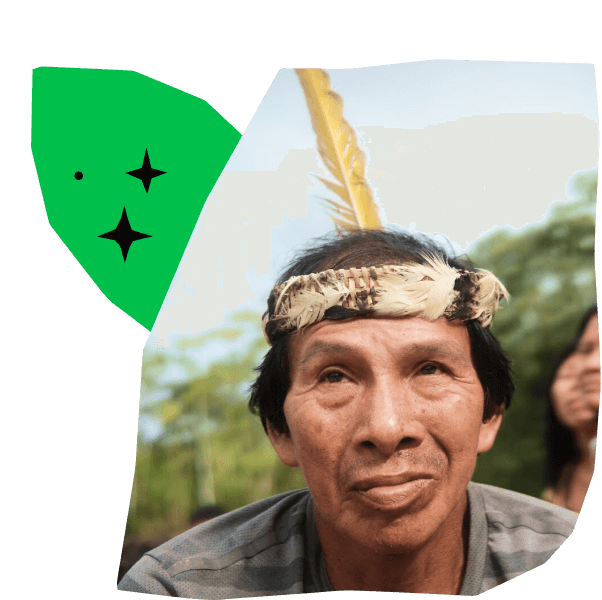 The Ceibo Alliance’s Kofan Team understands the challenges of living and working in communities whose lands have suffered invasion and destruction for decades.

This is why the Kofan Team is working to first secure the basic needs for their communities, clean water and solar energy, in order to ensure not only the health and economic independence of local families, but also release them from a newly imposed dependency on the western world.

The Kofan Team is also revitalizing cultural practices, such as drinking the sacred yagé vine or weaving hammocks, that have dwindled due to the degradation of their lands and the fragmentation of their communities. In order to defend their remaining ancestral territory, the Kofan Team is using strategically placed camera traps to catch and prosecute external actors who for years have entered illegally to log, mine and hunt.

With these initiatives, and others in the works, Ceibo is taking strides towards self-sufficiency, autonomy and self-determination in Kofan communities across Ecuador’s northern Amazon.