Since the beginning of the national mobilization, the response of the state has been to stigmatize, repress, and criminalize the protests taking place across the country. As a result, there have been multiple acts of persecution, criminalization, and abusive and disproportionate use of force against dozens of leaders and protestors, as well as the denial of freedoms by state security agents.

In addition, there have multiple documented instances of human rights violations, the denial of civil liberties, acts of violent persecution, and the disproportionate use of force against dozens of Indigenous leaders and protestors.

The undersigned individuals and civil society organizations urgently ask the Ecuadorian State, particularly the judicial institutions, to guarantee access to due process and to ensure criminal law will not be abused to persecute and to deter the work of the Indigenous movement who have been criminalized for exercising their legitimate right to protest.

Likewise, we ask President Guillermo Lasso and Law Enforcement to respect the mobilization of the Indigenous Movement and to begin a meaningful dialogue addressing their outlined concerns.

We demand judicial independence for the Indigenous leaders and human rights defenders carrying out their vital roles while exercising their Constitutionally guaranteed right to assemble.

Thank you for joining the movement!

Thank you for standing with the Indigenous movement and calling for a response to their urgent demands!

WHAT CAUSED THE ECUADOR NATIONAL STRIKE?

On Monday 13th June 2022, the Indigenous movement in Ecuador started an indefinite national strike to show their discontent against President Lasso’s government’s neoliberal and extractivist policies and to demand that their rights be respected.

Since day one of the strike, the government has repressed the right to social protest and criminalized Indigenous leaders, including the illegal detention of Leonidas Iza, the current president of the Confederation of Indigenous Nationalities of Ecuador (CONAIE).

Iza was illegally detained, without proper warrant, or due process. He was held at an undisclosed location for 20 hours and forced to sign documents without explanation – actions by the state that directly violate key human rights.

The Ecuadorian government’s aggressive criminalization of the Indigenous movement, its use of violent repressive tactics on Indigenous leaders, the participants of the strike, and the population victimized by its condemnable policies, is a matter of extreme concern.

Although Iza has since been conditionally released, violent arrests continue to surge across the country. CONAIE demands the constitutionally guaranteed right to protest be respected and states the national strike will continue until the demands of the people are met.

Indigenous peoples across Ecuador are requesting access to labor rights, a cap on surging fuel prices, an end to extraction projects across ancestral lands, and that their Constitutionally-granted right to protest be respected!

WE CONDEMN LASSO'S VIOLENCE ANGAINST PROTESTORS AND ASK FOR YOUR SUPPORT!

Our short film “Who Should Decide the Future of the Amazon” is 1st Place winner in the Environmental Category of th… https://t.co/3U0gT5uP6J

It’s clear: we are facing a climate emergency. If we don’t protect the Amazon — the lungs of the Earth — floods, he… https://t.co/c7AizJO9iu

The Indigenous @NSiekopai pple are fighting to recover the heartland of their ancestral territory. SHARE this pos… https://t.co/oMoKVCwV0g

HAPPENING NOW in Ecuador's Amazon - Important court hearing for @NSiekopai! "We are fighting to reclaim our ancest… https://t.co/QwbDdl2NS4

"We fight for our survival, we want to continue being Siekopai. This is not a fight for land, it is a fight against… https://t.co/4iA0hZVIWY

“We have a lot to offer, and the world has a lot to learn,” Yet Indigenous voices continue to be ignored at… https://t.co/2O5j9WIjPa

A message from #Ecuador's @NSiekopai nation: "We demand the State to guarantee our rights, for the judges to list… https://t.co/qPksQ64A9c

Zenaida Yazacama, vice president of @CONAIE_Ecuador, testified before the @IACHR how policies implemented by the g… https://t.co/GlVrovwf4P

In #Ecuador, figures for poverty (25%) and extreme poverty (10%) are alarming. A new migratory wave is happening, w… https://t.co/z4cUiD3VaP

"We, #IndigenousPeoples feel obligated to carry out protest actions to demand public policies that solve the great… https://t.co/oyL609paUH

In the @IACHR public hearing “Social protests and Indigenous peoples in Ecuador, we presented a report prepared in… https://t.co/MpivnTRKfq

This week, there was a public hearing called "#SocialProtests and #IndigenousPeoples in #Ecuador,” requested by… https://t.co/TQbU6BgrPo

In Ecuador, the Siekopai pple are fighting to recover the heartland of their ancestral territory, Pë'këya. The Si… https://t.co/eYF3u6G49r 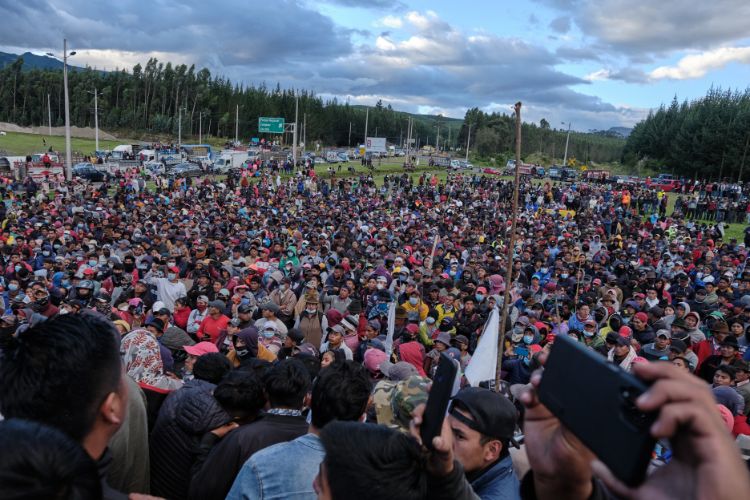 The undersigned individuals and civil society organizations urgently ask the Ecuadorian State, particularly the judicial institutions, to guarantee due process and to not abuse criminal law to persecute and to deter the work of leaders of the Indigenous movement who have now been criminalized for exercising their legitimate right to protest.

Likewise, we ask President Guillermo Lasso and the Public Force to respect the mobilization as a legitimate right of protest, and to not use improper force. We demand that you guarantee judicial independence so as to respect the rights of Indigenous leaders and human rights defenders in  carrying out their important functions in a state of law and democracy.

On Monday, 13 June 2022, CONAIE (the Confederation of Indigenous Nationalities of Ecuador), supported by various social movements and organizations, called for a national strike.The mobilization is motivated by the imposition of neoliberal policies by the government that has led to the exacerbation of poverty, the reduction of the general budget of the state in health and education, the reduction of social policies of social equality, the increase of insecurity and violence in various areas of the country, the aggressive imposition of extractive activities (mining and oil), the violation of the collective rights of Indigenous and Afro-descendant peoples; and in general, due to the lack of guaranteeing the exercise of economic, social, and cultural rights of the population.

Since the beginning of the national mobilization, the response of the state has been to stigmatize, repress, and criminalize the protest in various parts of the country. As a result, there have been multiple acts of persecution, criminalization, and abusive and disproportionate use of force against dozens of leaders and protestors, as well as the denial of freedoms by state security agents.

On 14 June 2022, the President of CONAIE and leader of the Indigenous movement, Leonidas Iza Salazar, was arbitrarily detained by members of the armed forces of Ecuador and agents of the national police, for 24 hours, during which he remained in isolation for more than 15 hours, his whereabouts unknown for much of this time; without being able to contact his family and lawyers, detained in police and military custody without being informed of why he was being detained.

Despite these rights violations, a judge declared the legality of Iza’s detention and began criminal proceedings against him for allegedly stopping public services; in a clear example of criminalizing and attempting to crush the universal right to social protest, using the Indigenous movement leader as an example.

The legal future of Iza continues to be uncertain while he awaits his hearing on 4 July 2022, where the judges will determine his presumed responsibility for the acts for which he is being investigated. We remain deeply concerned that the rights of Leonidas Iza are being abused and that he will be sentenced with the intention to silence the Indigenous leader and to discourage the Indigenous movement.

For these reasons, we make an emphatic call to the National Council of the Judiciary and the Attorney General Office to guarantee due process and that the Constitutionally-granted right to protest be protected. The criminalization of social protest violates the rights of Indigenous communities that intend to resist precarious living conditions, unemployment, and extractive activities that threaten their health, territories, and ways of life.

The government of Ecuador’s current treatment of the ongoing social protest and the resolution of the legal case against Leonidas Iza will send a clear message to the territories, the country, and to the world of whether Ecuador is a country that represses the rights of Indigenous peoples and social movements, or whether it respects the right to demand fair and inclusive policies that ensure the wellbeing of its people.