From Siberia to Australia, California to the Amazon, 2020 was another record setting year for climate fueled fires – the result of rampant greenhouse gas emissions and unabated deforestation. Meanwhile, the world over, we are combatting a virus that likely emerged as a result of human encroachment into wild spaces, with vulnerable communities being the hardest hit. To add insult to injury, the oversight vacuum created by lockdown measures has led to increases in deforestation rates across the Amazon. Globally, since the start of the pandemic forest loss alerts are up 77%. The irony is that the poverty caused by broken systems and emergency responses to the virus are fueling an upsurge in the very practice – deforestation – that could generate the next pandemic and disproportionately harm indigenous land defenders, the very people who are safeguarding our future from the climate crisis and repeated pandemics. 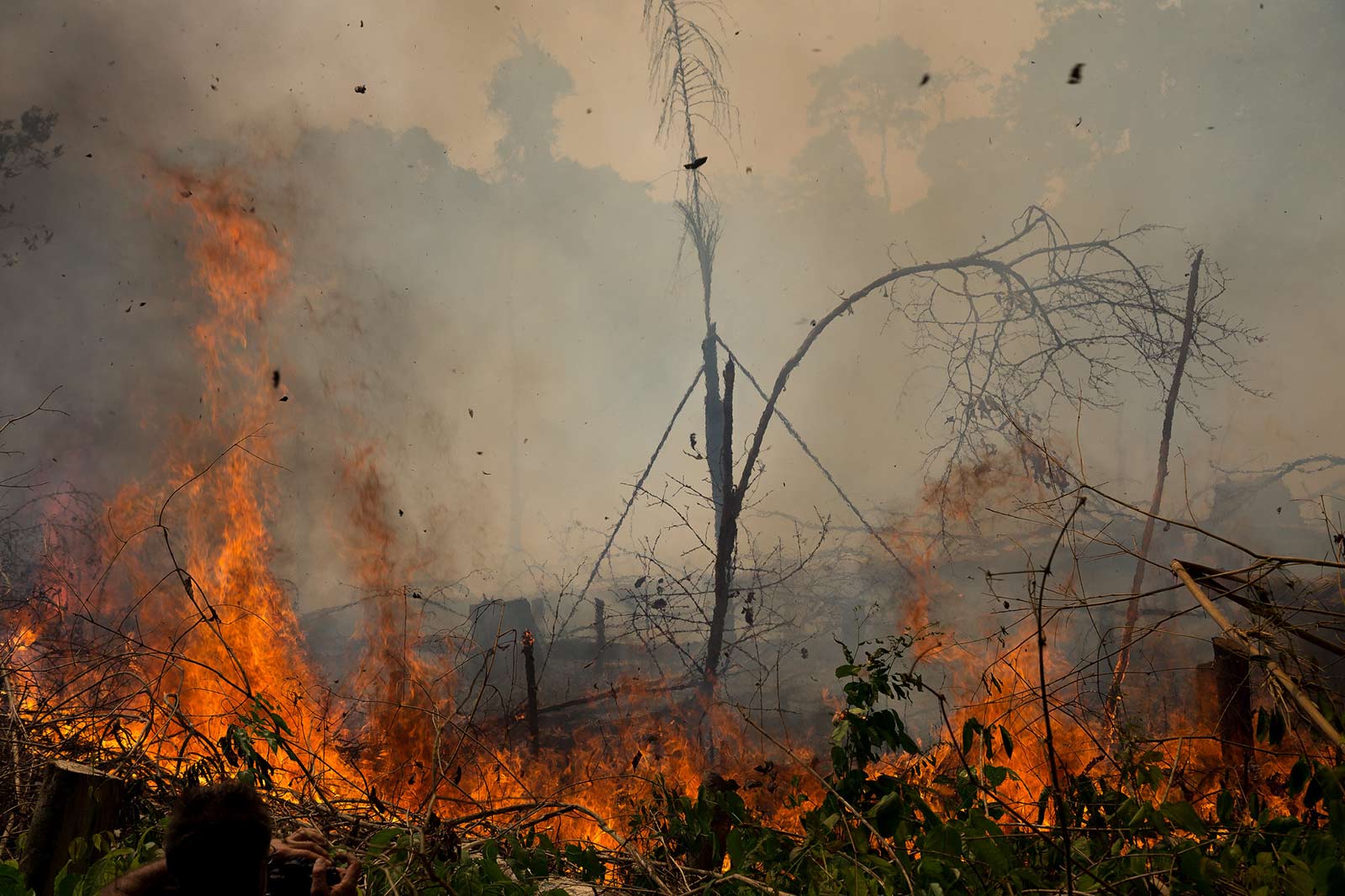 Sketch of a Disaster Foretold

In 2019, the fires raging throughout the Amazon made headlines and pulled heartstrings across the world. This year’s fires have been far worse, but they have been eclipsed in the media by a different deforestation-generated disaster – Covid-19.

In 2019, in Brazil alone, nearly 3000 km2 (735,000 acres) of forest was felled and then burned. Add to this the additional 1,500 km2 (395,000 acres) that burned unintentionally and this is an area a little larger than the state of Rhode Island. Bolivia also had a record fire season in 2019. One of the things that was exceptional about the 2019 fire season was the number of intentionally set fires to clear land for pasture and agriculture.

Compare with 2020. Data from Brazil, dating to mid-September, suggests an area nearly four times greater has been impacted, with forest fires touching roughly 19,000 km2 (4.6 million acres) – an area between the sizes of Connecticut and New Jersey. 2020 has been drier than 2019, but still not a severe drought year. What is likely making the difference is a surveillance void in the wake of regional lockdowns to prevent the spread of Sars-CoV-2.

Unique also to 2020 is the extent of burning in the world’s largest wetland – the Pantanal, a 210,000 km2 expanse in the middle of the South American continent between Brazil, Bolivia and Paraguay, which borders the Amazon in southern Brazil. The Pantanal is home to the densest concentration of jaguars anywhere on earth. Twenty-eight percent, a little less than three times the area that has burned in California, has gone up in flames. 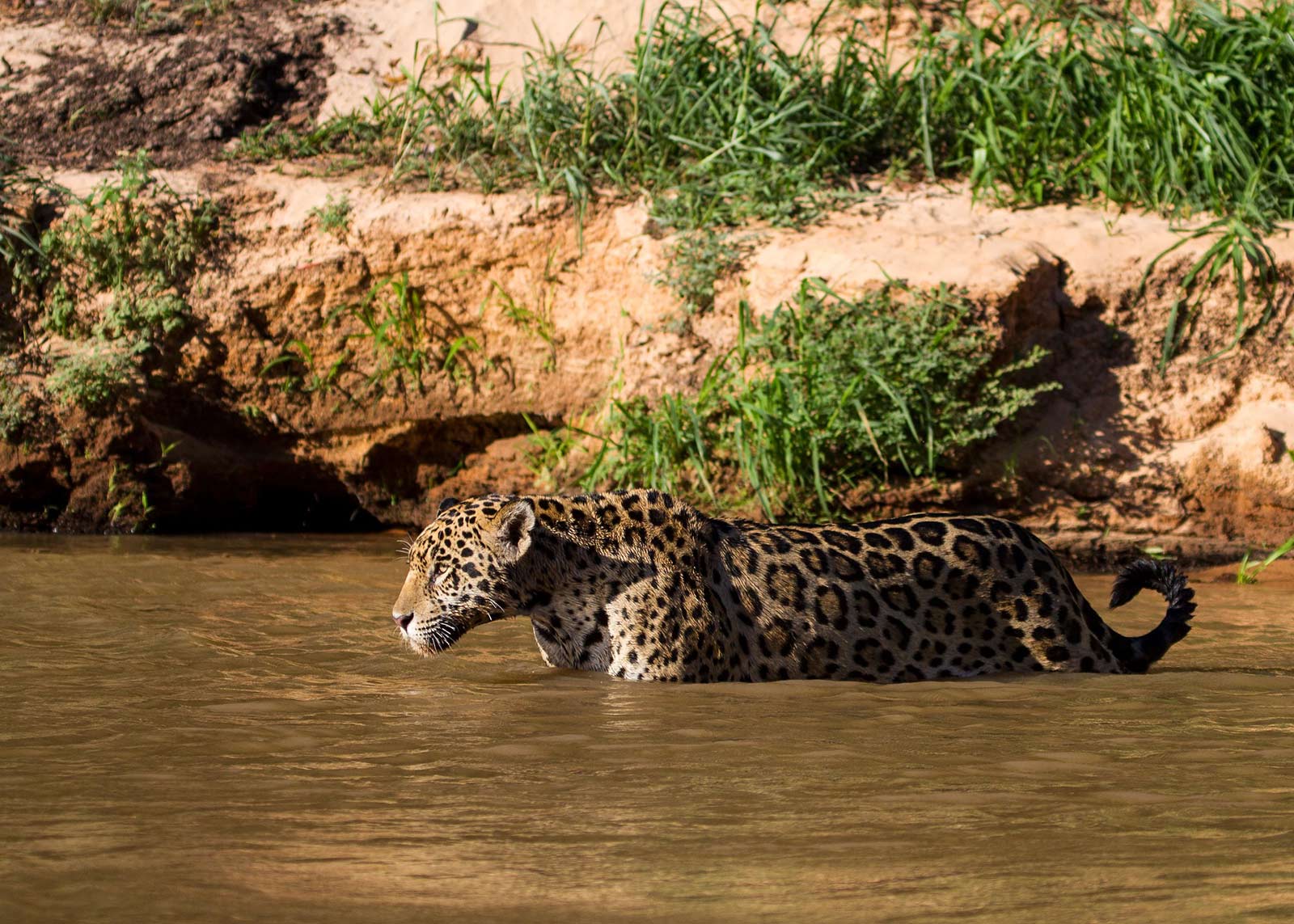 jaguars, a near threatened species with a population of about 2,000 individuals in the Pantanal’s jaguar corridor. Photo Gregoire Dubois

An article, entitled ‘Amazon wildfires: Scenes from a foreseeable disaster’ published in the scientific journal Flora concludes that increases in deforestation and climate-induced forest flammability are creating a critical situation that needs to be acted on urgently through innovation, cooperation and communication. Global efforts will prove ineffective if the Amazon’s best conservationists – Indigenous people – are left out of decision-making spaces and if their land rights are not respected and upheld.

The main driver of these fires in the Amazon is land clearing by settlers to expand cattle and agricultural operations. Proof of this is that early in the season, in July 2020, 84% of fires burned on recently cleared land, as seen from satellite images. Compounding an already volatile situation, Covid-19 measures have led to a “wild, wild west” scenario which has allowed deforestation rates to skyrocket across the Amazon during the pandemic. A study in Colombia found that a stark increase in forest fires beginning in March 2020 corresponded with an increased presence of armed groups and decreased governmental and non-governmental forest monitoring capacity. 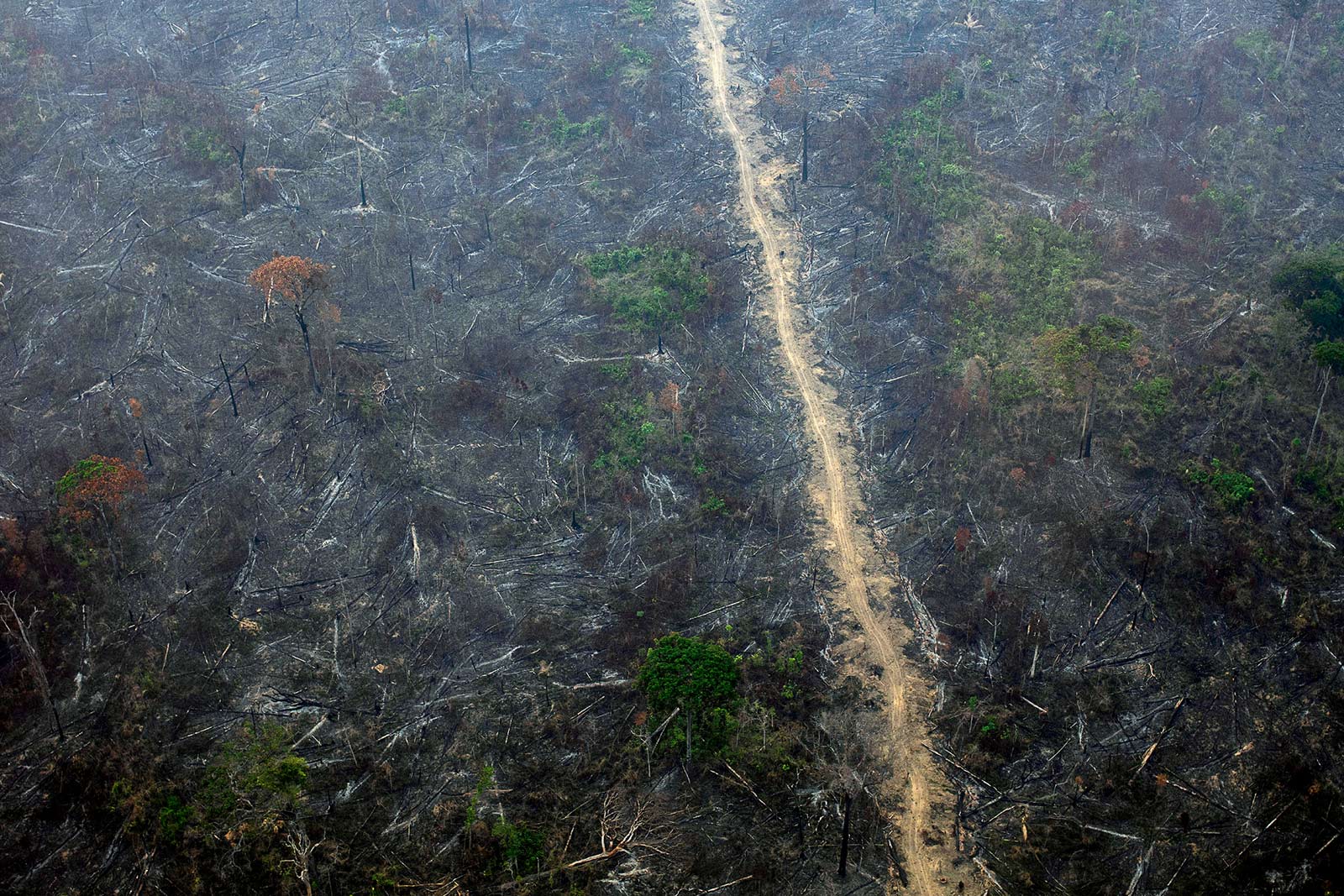 Fires in Brazil’s Amazon increased 13% in the first nine months of the year compared with a year ago, as the rainforest region experiences its worst fire season in a decade. This image shows the remains of what was once forest near Novo Progresso in the state of Para in the Brazilian Amazon, September 2020. Photo Marizilda Cruppe/Amazônia Real/Amazon Watch

The climate is increasingly an accomplice in this arson. The dry season in the Amazon has increased by approximately 0.6 days per year since the 1970s, partly due to deforestation and partly due to climate change. That makes A MONTH more of dry season compared to before industrialization. In that month, twigs and leaves accumulate on the ground, known as necromass, as trees shed biomass in an effort to conserve water. Over the course of the extra month, this leaf litter has a chance to get drier and drier, essentially creating a tinder box. 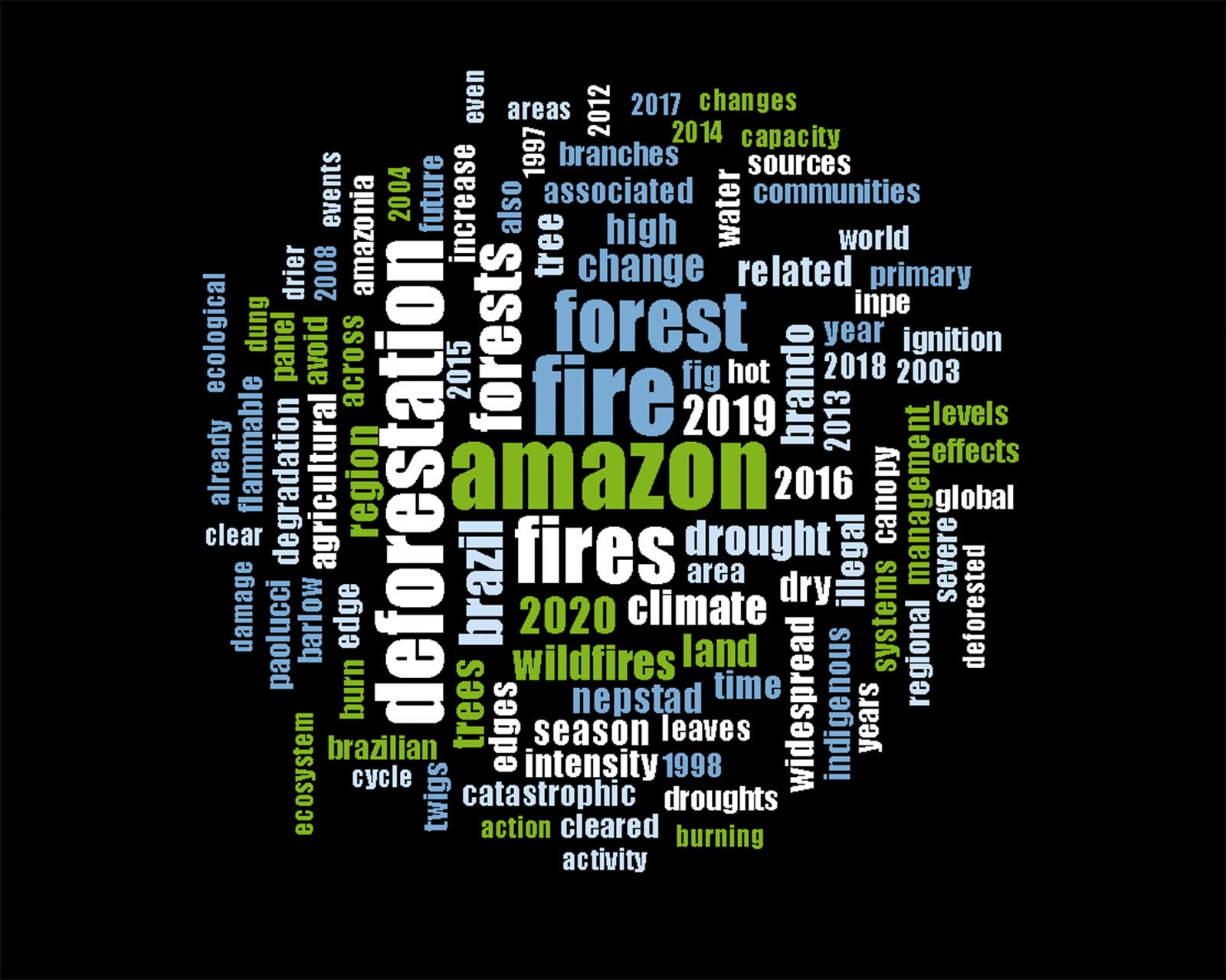 Meanwhile, studies are pointing at a relatively new problem in the Amazon: fragmentation and forest edges. This has been an issue in other parts of the world, but until recently the expanse of Amazonian forest was so large that the relative proportion of forest edge to intact forest was negligible. However, a recent study has shown that the number and the size of large forest plots decreased significantly from 2001 to 2017 in the Brazilian Amazon. This has an impact on fires because forest edges are drier and more vulnerable to damage from run-away fires. Another study found that post-fire annual tree mortality along forest edges was up to 90% in drought years.

“Decisive Action Now.” When the abstract of a scientific article ends this way, instead of the customary “more research is needed,” you know we’re in trouble.

In a dystopian twist, the fires themselves dry out surrounding forest making them more susceptible to fires the following year and also, in a final blow, contribute to the climate crisis which is sapping the forest of its moisture in the first place.

As has been made all too clear through the global Covid-19 pandemic, disasters hit poorer people hardest, and natural disasters impact people reliant on nature, such as indigenous people, most.

Fires damage people’s property, their livelihoods and their health. In California, 10,488 Structures structures have been destroyed in this year’s fires alone. In the Amazon these figures are unknown, but a recent study found that 43% of people interviewed in an area of the Eastern Brazilian Amazon were affected by fires at least once in the past five years. 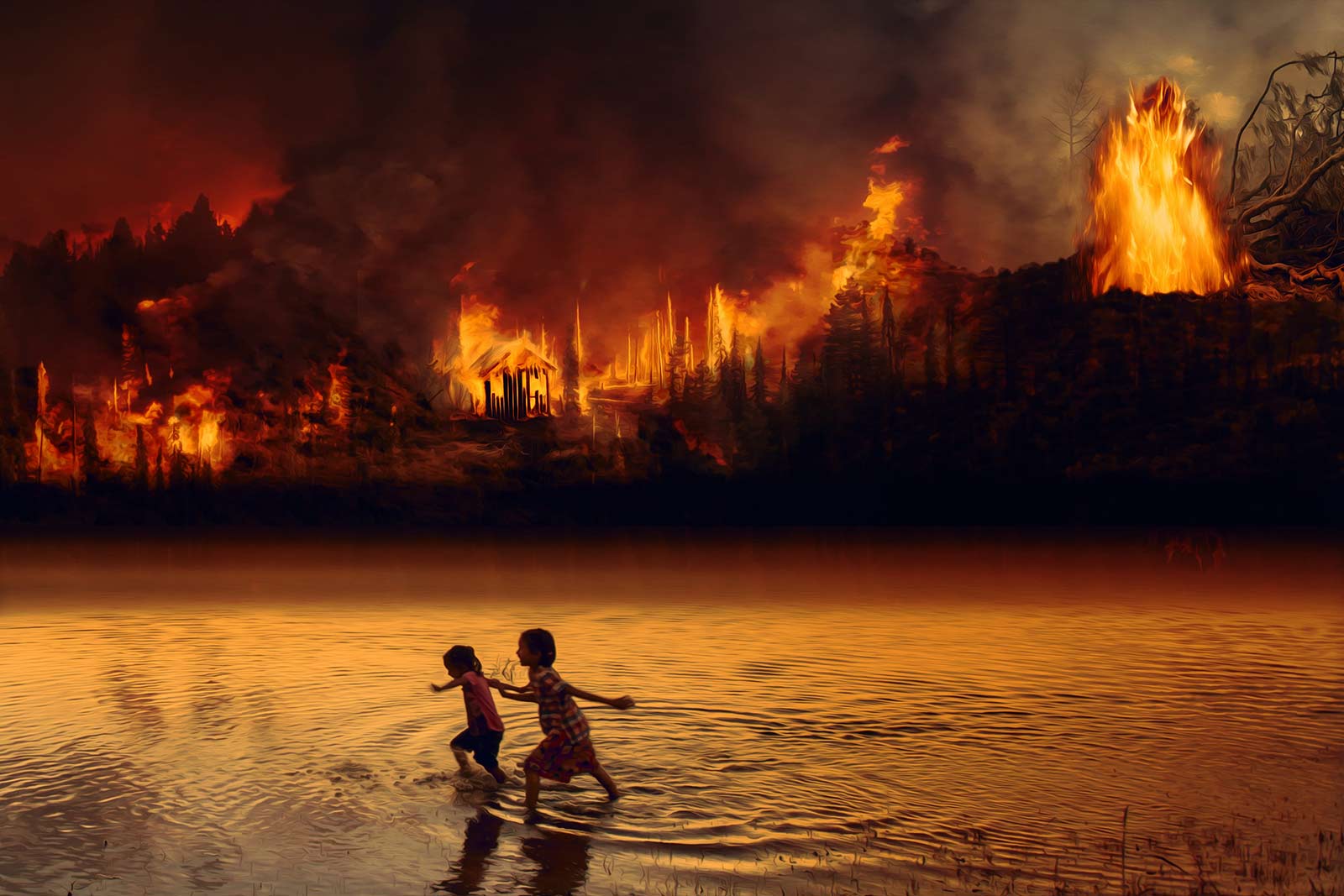 A word cloud from the Brando et al. 2020 article entitled ‘Amazon wildfires: Scenes from a The fires in the Amazon threaten Indigenous peoples’ survival. Photo courtesy of Ria Sopala on Pixabay

Many indigenous people throughout the world depend on forests for most of their food and building materials. Yet, in 2020, ninety percent of the Guató tribes’ land in Brazil has been destroyed, obliterating their crops and wild plants, to give just one example. Overall, there was an 87% increase in the number of fires recorded on indigenous lands in Brazil between 2018 and 2019. Fires are even raging into the land of uncontacted tribes, who depend entirely on the rainforest for their survival. Since the 2020 fire season is still upon us, it is too early to tell what the compounded impacts of increasing deforestation trends, the climate crisis and Covid-created monitoring vacuums will be. 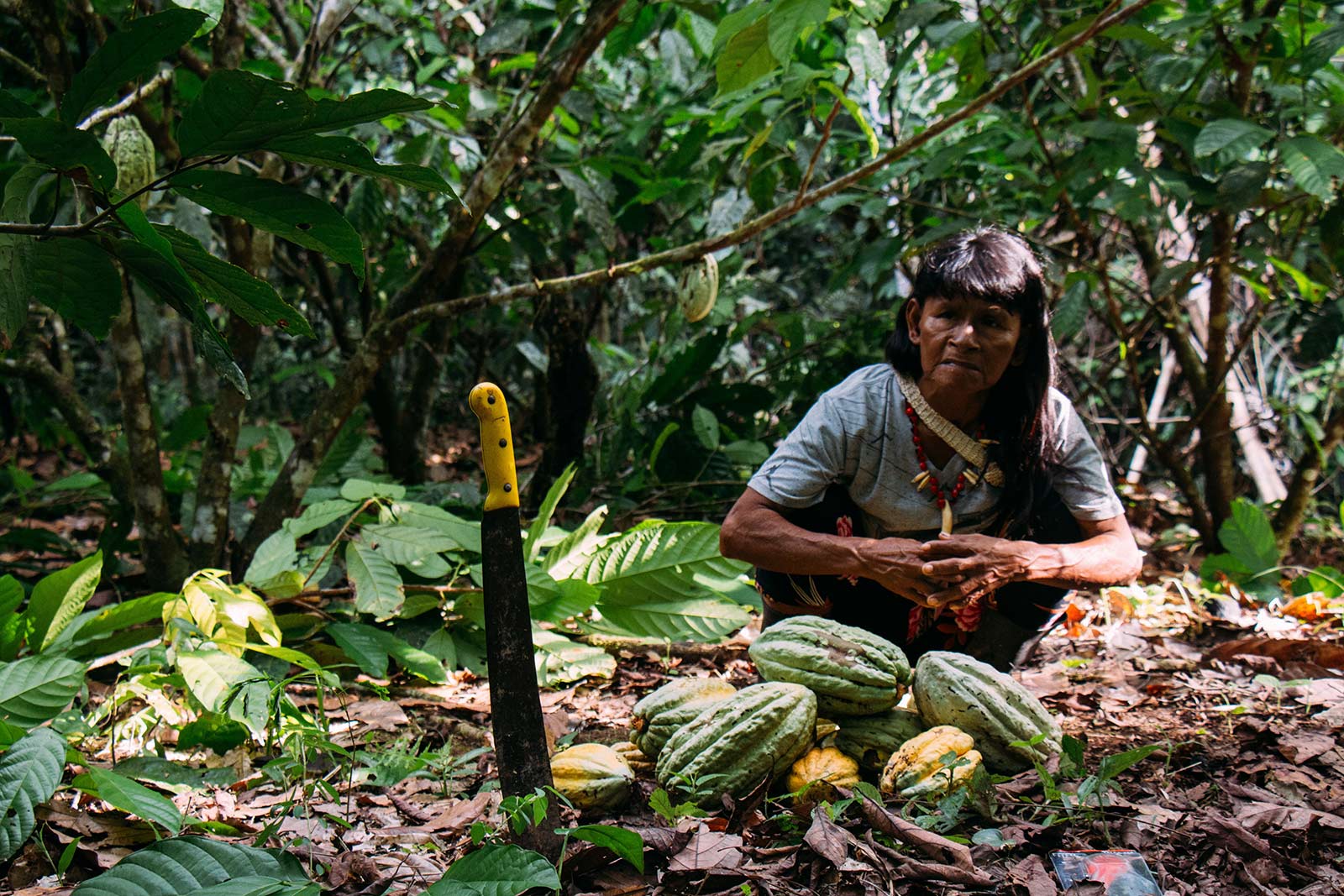 Worrisome effects on human health come in the form of worsening air quality in the region as well. A study found that forest fires led to a 58% increase in hazardous air-borne particulate matter in the Apyterewa Indigenous lands, Eastern Brazilian Amazon, in the 2016-2019 period. Another study showed that hospitalizations among children doubled between the 2018 and 2019 fire seasons in a region of northern Brazil. 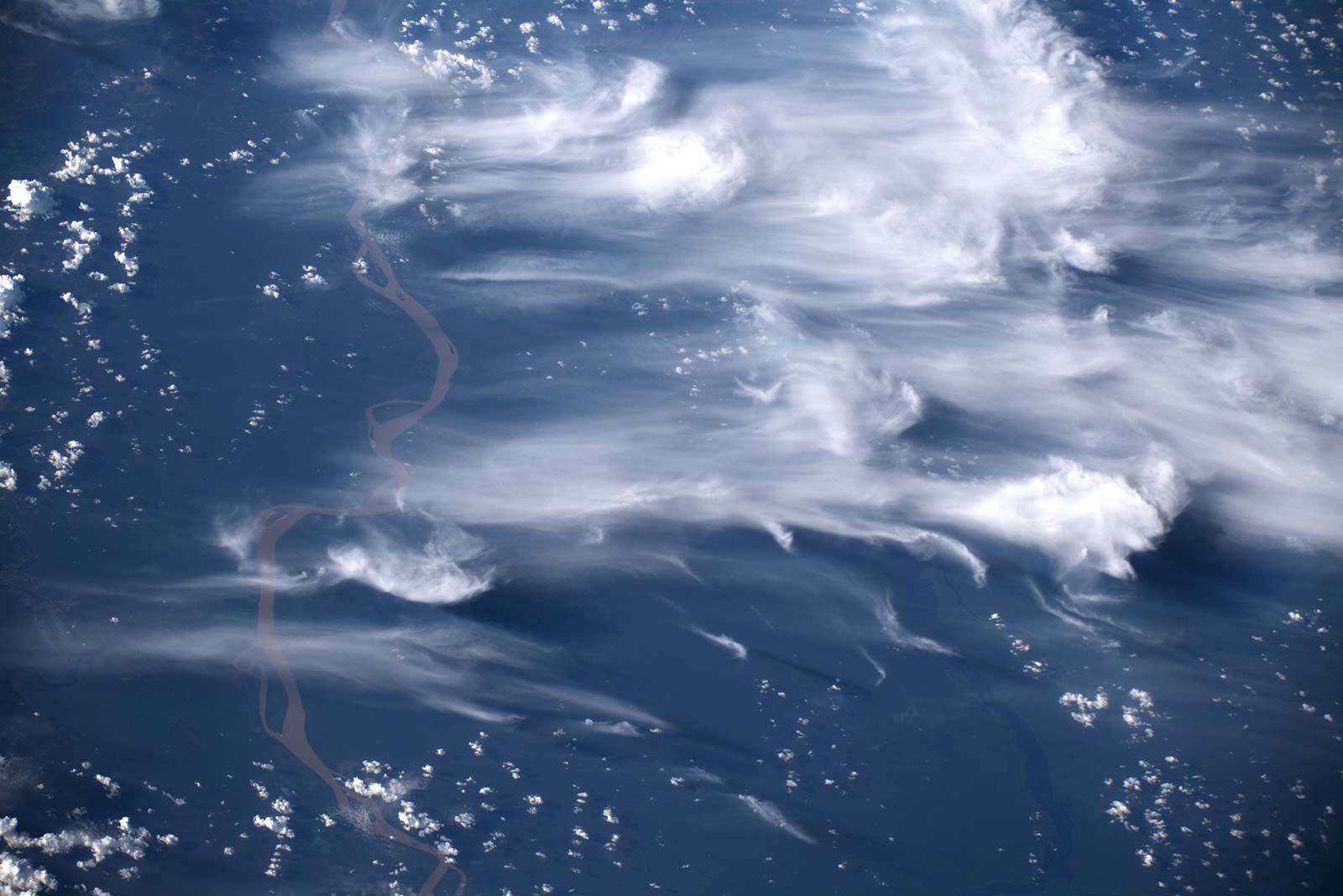 Images of fires in the Amazon rainforest captured by ESA astronaut Luca Parmitano during his Beyond mission to the International Space Station, 2019. Photo Courtesy ESA/NASA-L.Parmitano

How do we get ‘Out of the Woods’

The question becomes, what do we do? Once again, scientists are not hedging: “We have never been so capable of identifying the problems haunting the Amazon as we are in 2020. Our challenge now is to act fast on the solutions, before climate change makes it much harder to solve the fire problem in the Amazon.”

Solutions to keeping destructive practices from further destroying the Amazon have to be collective because each person’s fire risk is dependent on what the neighbors do, both at the farm-level and the nation-to-nation level. This requires leadership, international coordination, high-level communication and collaboration.

Unfortunately, it seems that people in positions of power aren’t heeding the message and won’t do so unless the international community holds their feet to the fire, figuratively speaking, of course. In just one example, Bolsonaro-appointed environment minister Ricardo Salles, who was convicted of “administrative dishonesty” for deliberately altering maps in favor of a mining company, is ending environmental policies designed to keep forests standing at an alarming rate.

The recent Biden-Harris’ win in the US Presidential elections could signal a positive turning point for action on climate and the ecological emergency facing the Amazon rainforest. Biden has pledged to recommit the United States to the Paris agreement on climate change, and advocated for international cooperation to halt Amazon destruction. Indigenous peoples, such as Nemonte Nenquimo hope that Biden “will understand that the Amazon is being driven to the brink of collapse […] and have the courage to take a stand for the Earth and not side with the big industries”. Fortunately, scientists are also increasingly banding together to urge for decisive action: no more promises, no more conferences. Feet on the ground.

It is urgent that banks, customers, companies and countries do all in their power to stop feeding this carnage and encourage other viable options for the Amazon and the people who call it home. Once again, the science is clear…support for an indigenous-led, Amazon-wide halt to deforestation has never been so urgent.