Deforestation in the Ecuadorian Amazon:

When I started doing research on deforestation in the Ecuadorian Amazon back in 2001, it was almost impossible to get a clear idea of where and how large the deforestation frontlines in this corner of the Amazon were. The information was scarce, not easily accessible, and often not credible.

However, some alarming clues were already out there. One was from the scientific community, which, back in 1993, had identified the Napo River Watershed, in the heart of the Ecuadorian Amazon, as one of the most active deforestation fronts in the tropical world (namely the Napo Deforestation Front). A bit later, in the mid 2000’s, scientists warned that Ecuador had the highest deforestation rate in South America. At that time, even with the limited information available, it was clear that this mega bio-diverse rainforest was under great pressure.

THE OIL INDUSTRY HAS BEEN THE MAIN DRIVER OF DEFORESTATION IN THE ECUADORIAN AMAZON FOR DECADES. ROADS AND PIPELINES TO ACCESS OIL INSTALLATIONS, LIKE THIS ONE BUILT BY THE CHINESE OIL GIANT ANDES PETROLEUM CLOSE TO ANCESTRAL SIONA LANDS, ARE THE TYPICAL FIRST BLOW TO RAINFOREST INTEGRITY WITH COLONIZATION FOLLOWING SUIT.

But it was only by traveling throughout the region, and actually crossing the frontlines of deforestation, that I finally witnessed what was really going on: aggressive intrusions into pristine indigenous lands were being mostly driven by the expansion of the oil industry since the 1970’s, through the construction of roads, pipelines, wells, pools, seismic lines, camps and heliports, which, once constructed, led to a second wave of deforestation through rapid colonization and the establishment of pastures.

That was more than 17 years ago. 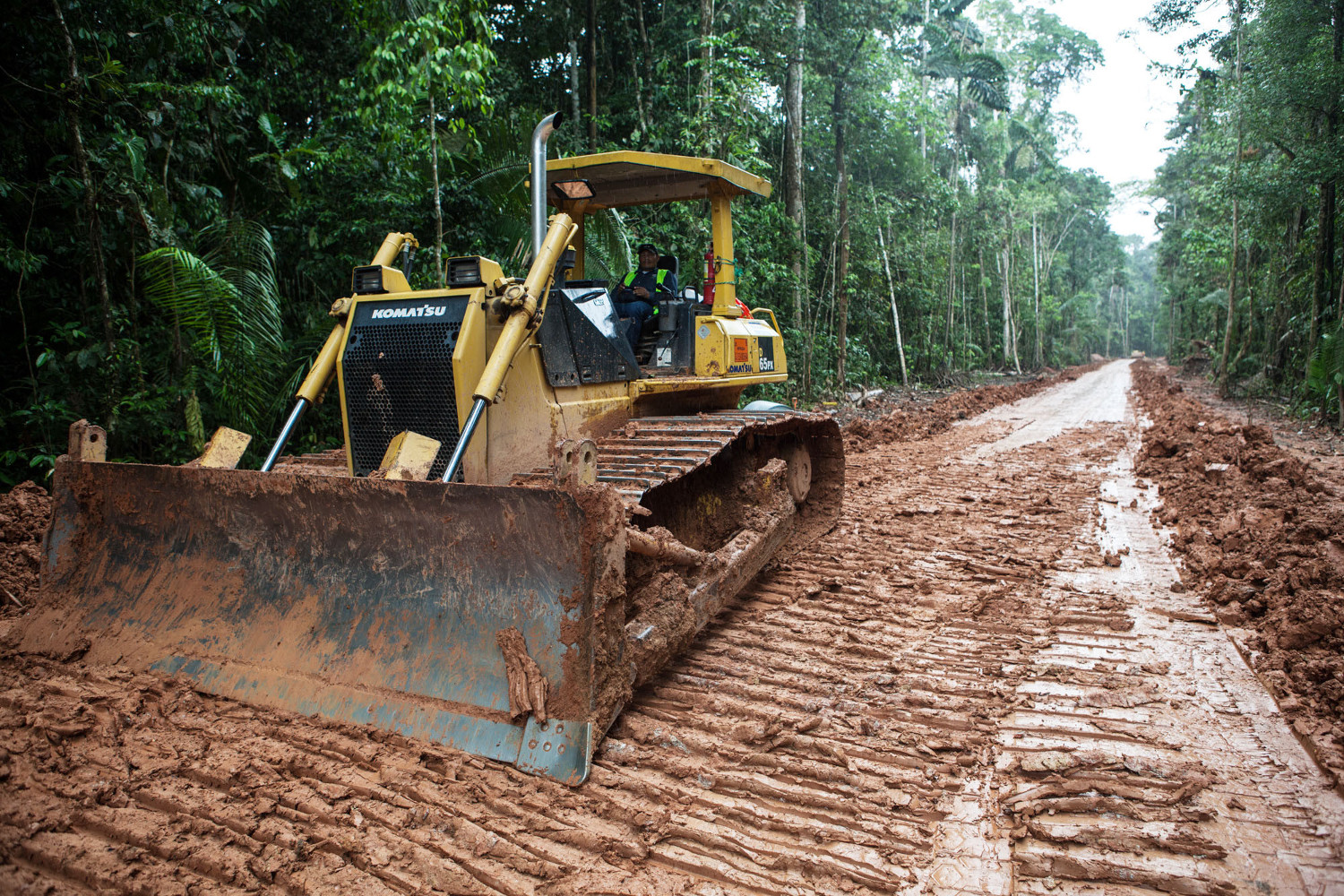 ONCE A ROAD IS BUILT IN THE AMAZON, BOTH CLIMATE AND BIODIVERSITY ARE PROFOUNDLY IMPACTED DUE TO THE VERY NATURE OF THIS CARBON-RICH MEGADIVERSE ECOSYSTEM.

Witnessing a cultural and biological catastrophe in real time

Since then, the expansion of the industrial footprint hasn’t stopped – on  the contrary, it has grown (although Ecuador is not the worst of all Amazonian countries). For example, the Ecuadorian Amazon is now crisscrossed by more than 9500 km of roads – or 1.5 times the Earth’s radius – built for pipelines, in order to connect more than 3430 oil wells and to provide access to new pristine areas. New studies also show that the patterns of deforestation in the Amazon are shifting from large blocks to widespread small patches, increasing threats both to climate and biodiversity.

But one positive development is that technologies, satellite images and scientific research have given us a much better understanding of the scale and the impacts of such rapid forest degradation. Now, with just a few mouse clicks, you can see years of satellite data revealing the blows of deforestation. With so much information readily at hand, it has become impossible for industries and the Ecuadorian government to hide their environmental record. 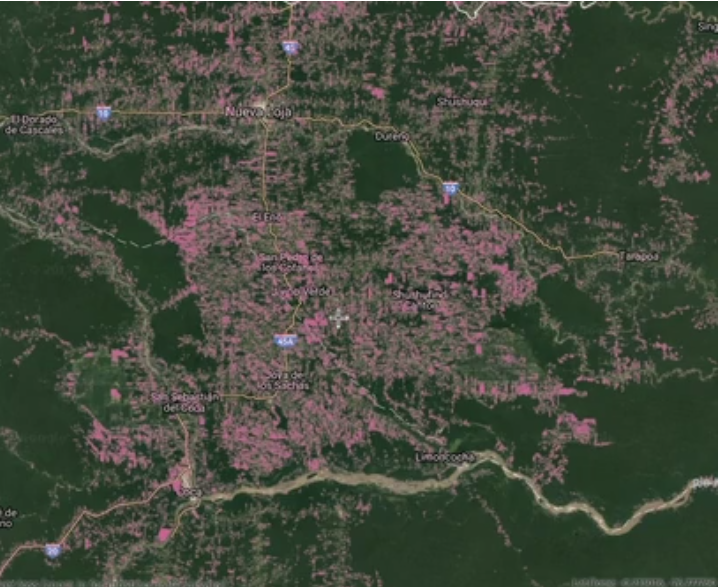 THE INTERACTIVE MAP FROM GLOBAL FOREST WATCH SHOWS OVER 14 YEARS OF DEFORESTATION IN THE ECUADORIAN AMAZON, A VERY USEFUL FREE ONLINE TOOL FOR ANYONE INTERESTED IN LOOKING INTO THESE ISSUES.

In its 2014 publication on deforestation-driven greenhouse gas emissions submitted to the United Nations, Ecuador declared having lost more than 475,000 hectares of primary Amazon rainforests from 1990 to 2008 Four months later, the country had to readjust its statistics because it had apparently underestimated early 2000-2008 Amazonian deforestation by 25,000 hectares, for a total of 499,000 hectares lost in the Amazon since 1990. If we add up deforestation measured by satellite from 2008 to 2016, the Ecuadorian Amazon has lost 650,000 hectares of pristine rainforest. This represents a massive encroachment on ancestral lands of many indigenous communities at an average pace of 110 American football pitches of forest cleared every day from 1990 to 2016.

Unfortunately, with 68% of the Ecuadorian Amazon divided into oil blocks, Ecuador is planning to push the frontiers even further in 2018 and the years to come, opening up new oil blocks for seismic testing and drilling in the southern Ecuadorian Amazon inside Waorani, Sapara, Achuar and Shuar lands, amongst others. With oil operations already inside iconic protected areas like the Yasuni National Park and the Cuyabeno Wildlife Reserve, it seems like the Ecuadorian government is on a reckless crusade to extract the last drops of crude oil out of the Amazon.

Remarkably, despite these waves of deforestation and colonization, pockets of forest are still standing. Research shows that the presence and recognition of ancestral indigenous peoples and territories is amongst the greatest obstacles to deforestation, forest degradation and climate change. Deforestation in the indigenous lands of the Amazon is known to be 2 to 3 times lower than outside recognized ancestral lands. 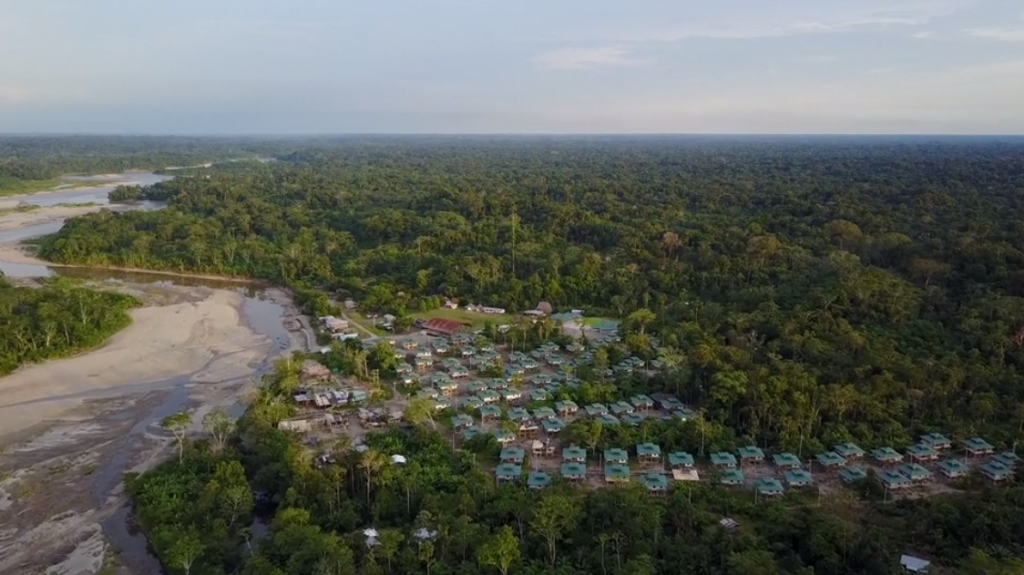 When overlaying primary forest cover with boundaries of indigenous ancestral lands in the Ecuadorian Amazon, one can see how indigenous communities are shielding the forests. The case of Dureno, a 10,000 hectare Ai’Kofan territory with an estimated diversity of more than 2,000 plant and 400 bird species, is quite striking. Surrounded on all sides by roads and pipelines, the community has defended its land and avoided the spread of roads into its forest, leaving an island of untouched forest amidst an ocean of oil wells, pipelines and pastures. 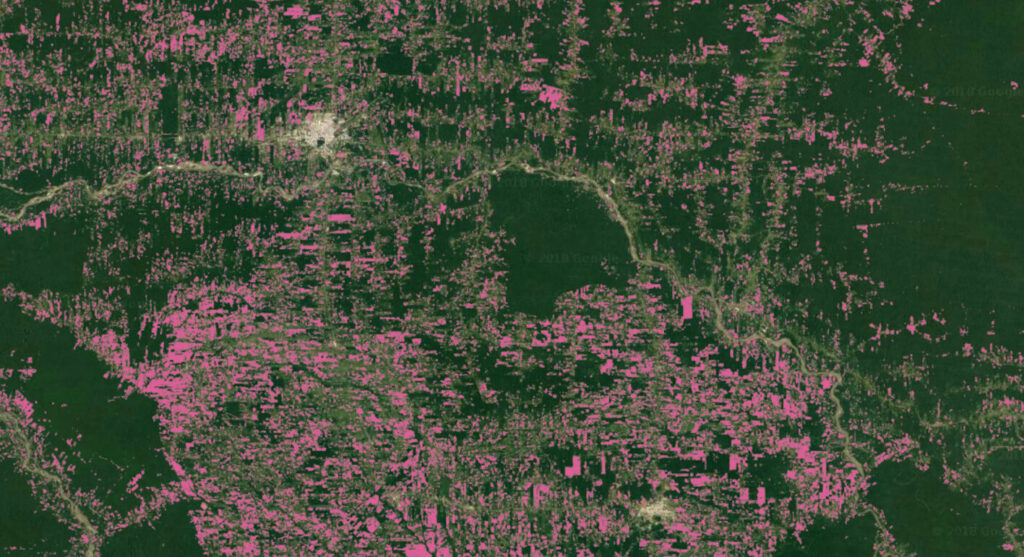 DESPITE CONSTANT ENCROACHMENT ON THEIR ANCESTRAL LANDS, INDIGENOUS PEOPLE OF THE ECUADORIAN AMAZON, LIKE THE A’I KOFAN OF DURENO, ARE STILL STANDING STRONG TO DEFEND THE LAST OF THEIR PRISTINE FORESTS AND BLOCK DEFORESTATION (SOURCE: GLOBAL FOREST WATCH).

Working in direct partnership with indigenous communities is at the core of our mission, and while pressures on land, forests and culture are constantly expanding, so are the abilities of indigenous people to take leadership, build networks and shape the resistance. The battle to stop deforestation in the Amazon is the battle to defend indigenous rights to their ancestral lands and cultures. And in return, these forests are amongst our best shields against catastrophic climate disruption, so this fight is of concern for all of us on a global scale. Will you fight with us?

Support our work to protect the Amazon and halt the expansion of extractive industries into ancestral indigenous territories by donating here.