The Pact: A Filmmaker’s Collaboration With The Siona To Tell Their Story In Defense of The Amazon - Amazon Frontlines

The Pact: A Filmmaker’s Collaboration With The Siona To Tell Their Story In Defense of The Amazon

In this article, American filmmaker Tom Laffay, whose inspiring short film “SIONA: Amazon’s Defender’s Under Threat” recently premiered on The New Yorker, takes us on a journey into his long-term film project with the Siona people of Putumayo.

The threats facing indigenous communities living along the border of Colombia and Ecuador, like the Siona of Putumayo, are unique and complex. On top of the encroaching extractive industries that plague most of the Amazon basin, these communities live amidst staggering violence from both the armed conflict and the narco-trade. With Colombia standing as the world’s most dangerous country for both indigenous human rights defenders and the activists, lawyers or filmmakers who support and accompany them, very few stories from the region reach an international audience.

We at Amazon Frontlines have been inspired by the Siona from the first day we stepped off the canoe on the riverbanks of the Putumayo River into their territory many years ago. We hope that their critical story and history serve to inspire others.

“SIONA: Amazon’s Defender’s Under Threat”, A film directed by Tom Laffay commissioned by The New Yorker and supported by The Pulitzer Center, 2020

“The jaguar slowly peeled back his skin to reveal his entrails, where a black stain was within him. He was sad.” Taita Pablo Maniguaje, a Siona elder and healer, translates the vision, “My people are in danger.”

As a filmmaker, it’s as much about listening as it is about seeing. If you’ve spent any time in the Amazon you can probably recall certain sounds with clarity. The whooping birds, the howler monkeys, the cicadas and the falling branches, the flowing rain on and off all day, the surrounding flow of incalculable quantities of water. In Siona indigenous territory along the Putumayo River between Colombia and Ecuador, you hear songs that have been sung for millenia. Chants that are powerful yet delicate, rhythmic and intentional. These songs are sung in Yagé (ayahuasca) ceremony, an ancient vision quest practice led by the Siona’s spiritual leaders, or Taitas. And in the darkness, listening to the rain fall from the Putumayo sky, your mind wanders and settles, as if you’re following Taita Pablo down a jungle path, into his reality, into history— past, present and future.

For thousands of years, the Siona have sung throughout the night to ease the rains, call for plentiful game, protect young warriors and speak with the dead. Now, the songs are being broken. Other sounds pierce the night. An exchange of machine gun fire, or the mechanical drumming of an oil rig pulsing through the jungle, disrupts the sacred space of ceremony. During a morning cleansing ritual, as the sun filters through the leaves and the jungle awakes, the high-pitch, magnetic frequency of a landmine detector mixes uneasily with the natural world. “The FARC started to plant the landmines inside the reservation, where families were confined and displaced. I want the rest of the world to understand our situation as indigenous leaders, when we stand up and make demands, we’re targeted and we’re disappeared. But if we don’t defend our territory and we don’t love it, we aren’t Siona.” says Adiela Mera Paz, the young leader featured in The New Yorker film  SIONA: Amazon’s Defender’s Under Threat. 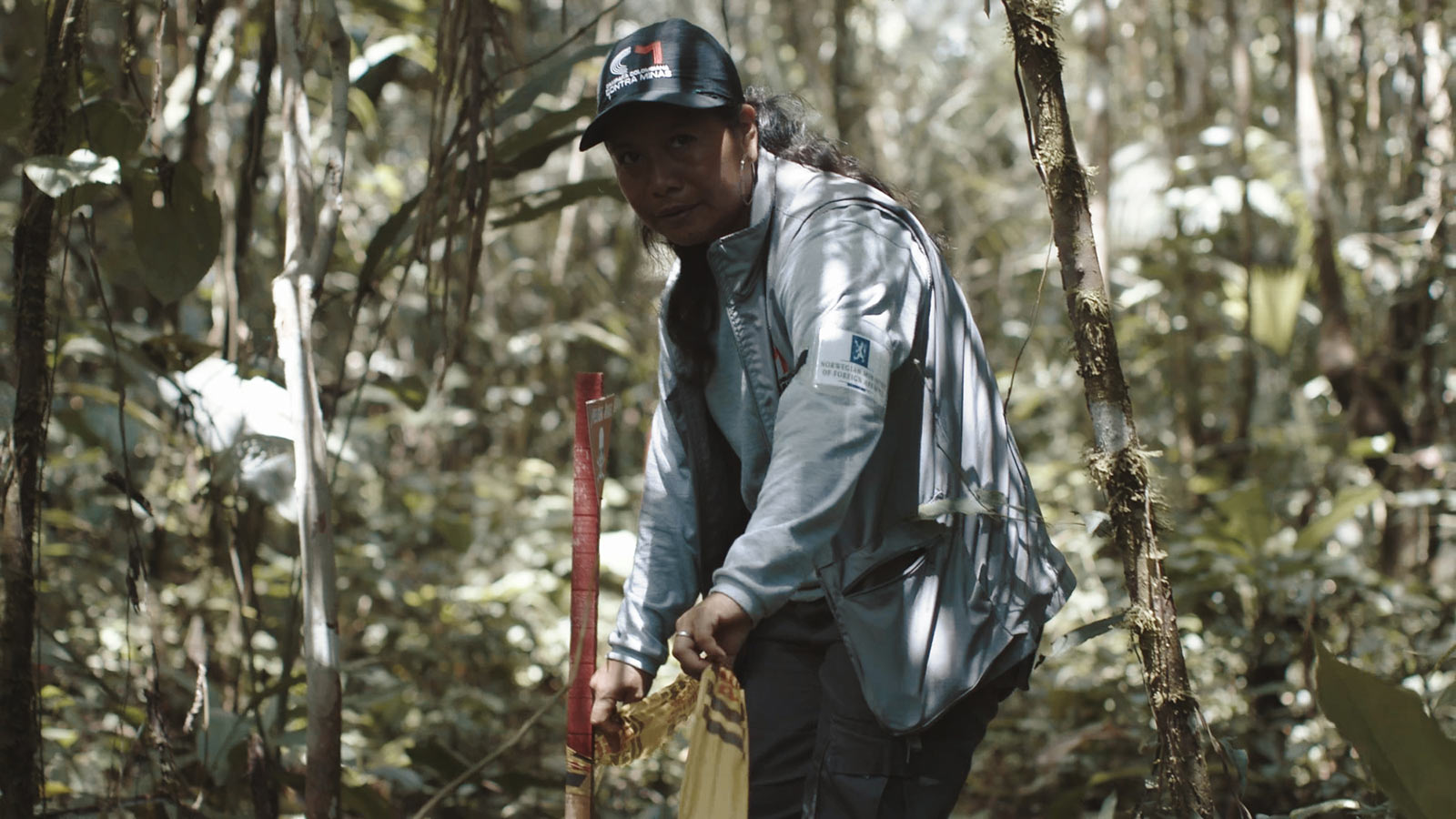 Siona leader Adiela Mera Paz tapes off an area suspected of landmine contamination as part of her work for The Colombian Campaign Against Landmines in Siona territory in December 2019. A still from the New Yorker film “SIONA: Amazon’s Defender’s Under Threat” directed by Tom Laffay, 2020

The Siona live at the entrance to the Northwestern Amazon. “When you walk through Siona territory, you feel exactly what the elders say, that everything is alive. [They] teach us about the importance of our duty as Siona, to care for and protect our territory,” said Adiela. Their true name, Zio Bain (in their own language Mai’Cocá) means “people of Yagé”, the plant medicine commonly known by its Kichwa language name Ayahuasca, which means ‘bitter vine.’ Yagé is the guiding force for the Siona and is drunk in ceremony religiously by the Taitas, or spiritual elders, to determine the path forward for their people. It’s a conduit— a window into the world of the spirits and a teacher instructing them on how to live well— allowing their ancestors to be guided by “invisible people”— spirit guardians of the jungle and sky. As Adiela says, “Our grandparents have told us that Yagé comes from a sacred plant. That it’s a hair given by God. It’s the most sacred thing we have as a people. Yagé is about learning, to be guided and achieve our purposes.” 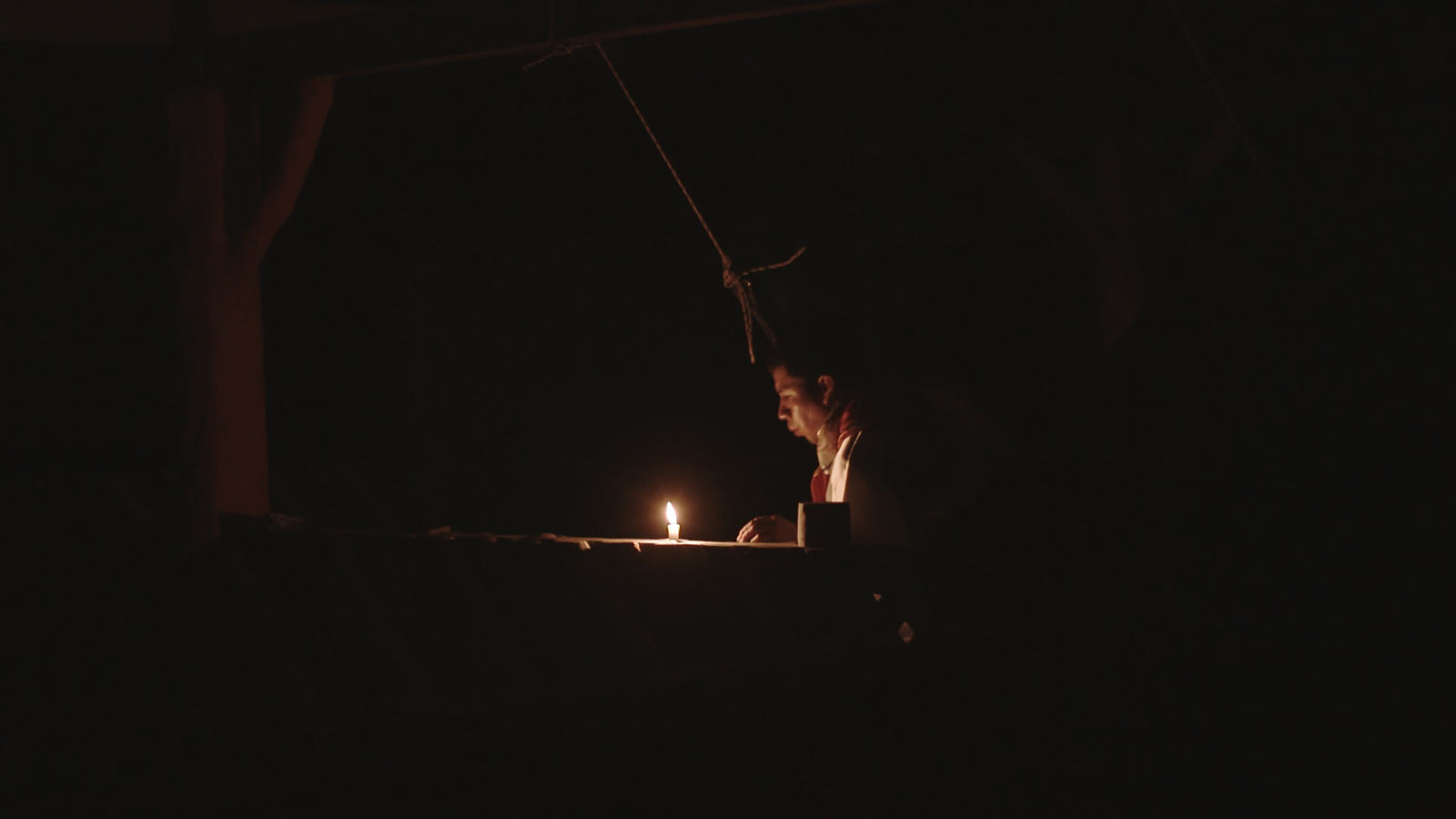 In 2009 the Zio’Bain (Siona) Nation was declared by the Colombian Constitutional Court as being “at risk of physical and cultural extinction due to armed conflict,” displacement and the presence of landmines, along with 33 other indigenous nations living in Colombia. Thirteen years later, the Siona are more organized than they’ve been since their numbers began to decline in the mid 1900’s, and they are implementing a bold strategy for territorial defense. Working alongside Amazon Frontlines, and other human rights organizations, they are setting a precedent for other indigenous nations, who are learning from the Siona’s organizing techniques and engagement with the Inter-American Commission on Human Rights. Mario Erazo Yaiguaje, the Territorial Coordinator of the Siona Reservation of Buenavista, embracing his responsibility says, “We’re like a spiritual army, a very humble one, converting the spiritual into the visible.” 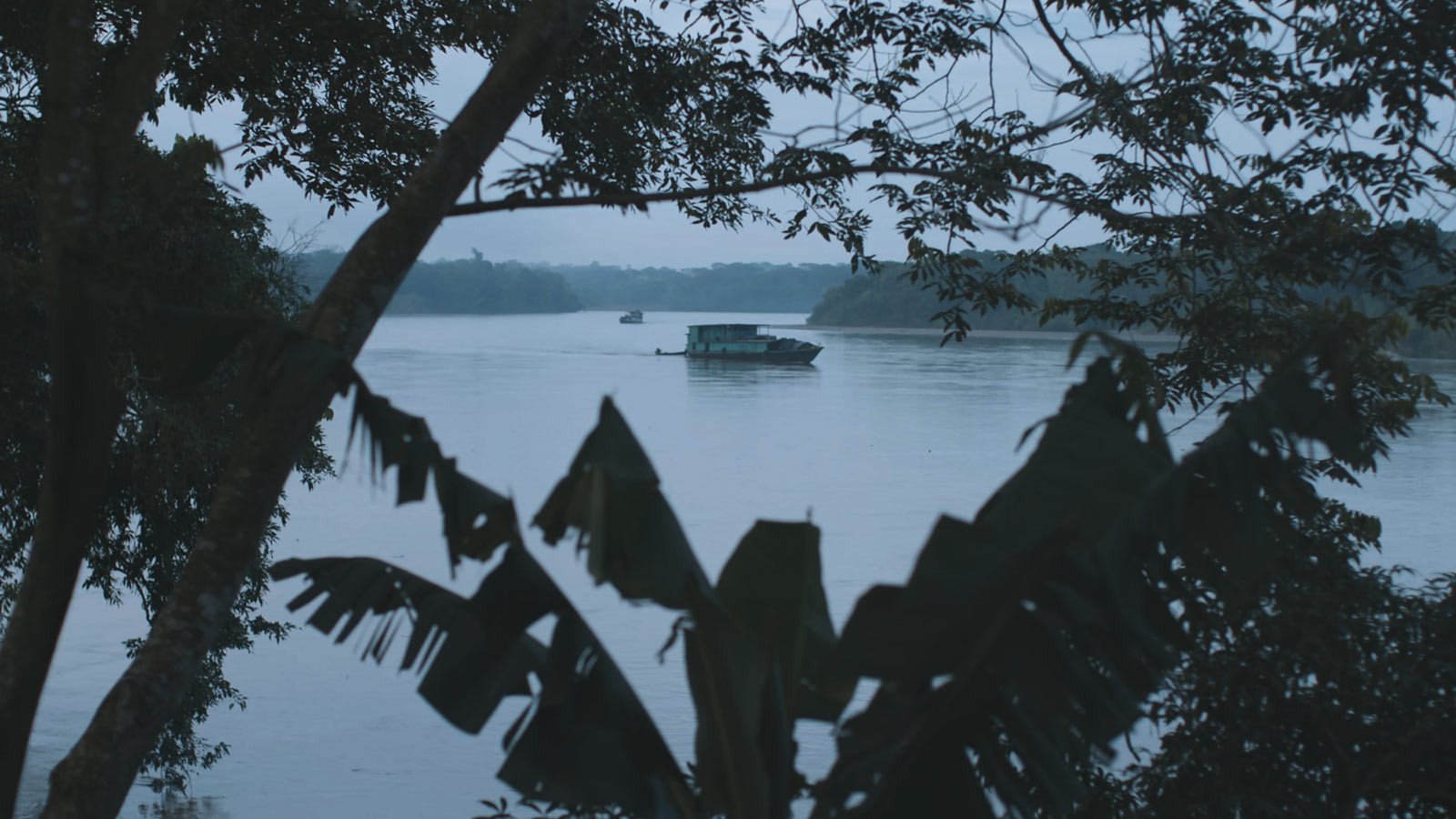 A view over the Putumayo River along the Ecuador-Colombia border. A still from the New Yorker film “SIONA: Amazon’s Defender’s Under Threat” directed by Tom Laffay, 2020

Despite a 2016 negotiation between the FARC and the Colombian government, the country is not at peace. Nowhere is this more visible, perhaps, than the department of Putumayo, where the Siona have lived for millenia. Armed confrontations often play out in or around Siona territory, leaving houses riddled with large caliber bullet holes, animals slaughtered and, in some cases, Siona community members killed. Court orders, human rights investigations and serious journalistic reporting on this issue have been completely ignored by oil companies operating near Siona territory, exacerbating risks of violence from armed actors and seriously threatening the waterways, animal life and culture that the Siona depend on and base their cosmovision – a philosophical and spiritual worldview. The fight for the Siona’s survival is urgent. Yet the Siona people have mounted a fierce resistance and shown monumental adaptability in maintaining their spirituality and identity through centuries of forced evangelization, colonization, rubber extraction, slavery, narco wars, petroleum extraction and resurgent armed conflict. If anything, we should learn from the Siona and other indigenous peoples as conscientious objectors to the war that neo liberal capitalism is waging on our planet. 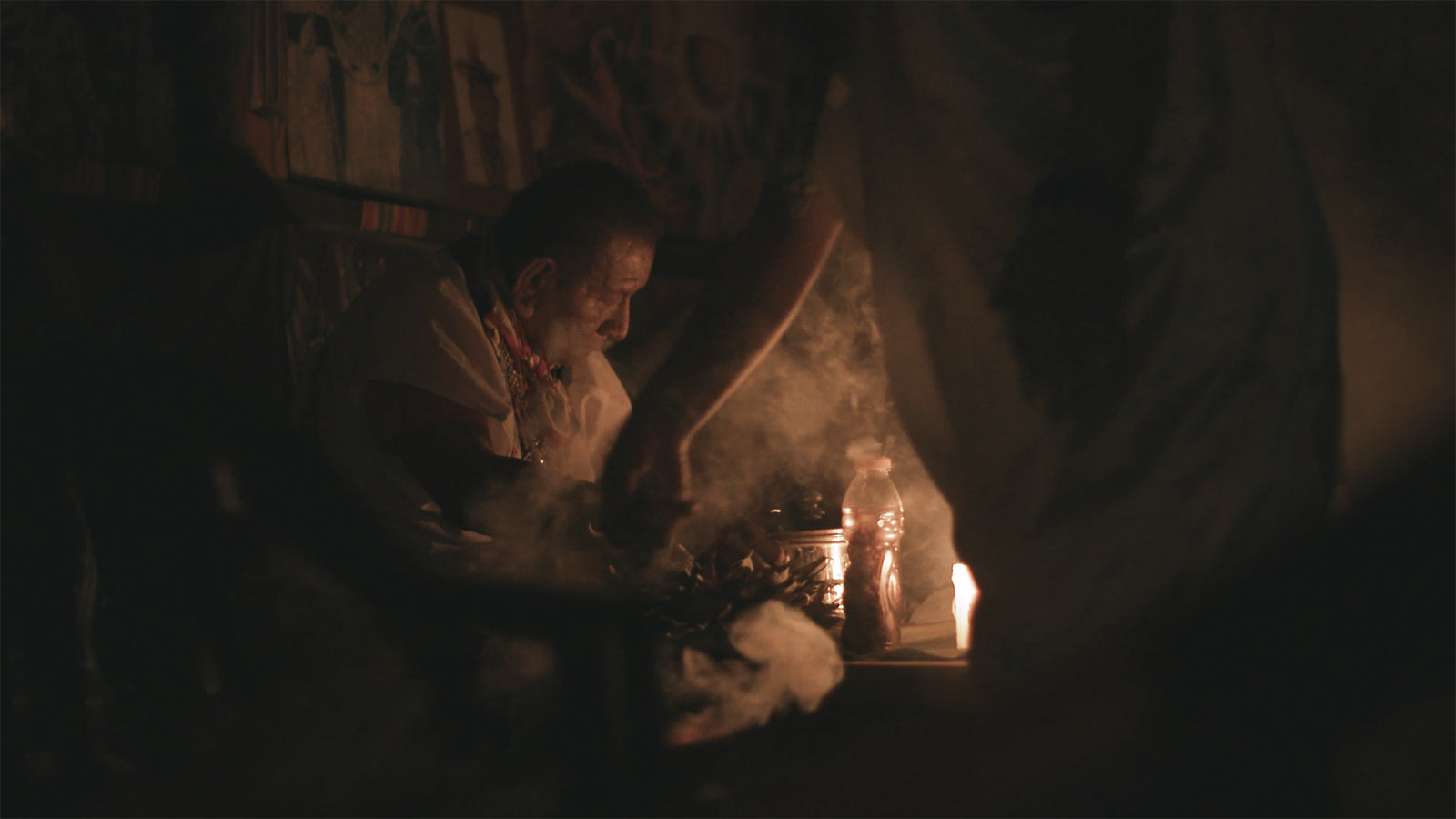 The Siona are thought leaders in the defense of the Amazon, a reputation they’ve earned through the fierce defense of their spiritual culture and which is marked in every facet of their territorial defense strategies. “They don’t play by the book; they flip the script on government officials and oil companies because the Siona and the Taitas are operating on another plane. That’s the power of traditional governance rooted in yagé. It’s inspiring, it’s effective and it gives everyone who’s around them hope,” said Brian Parker, lawyer with Amazon Frontlines. Communicating the importance of culture and history to indigenous peoples of the Amazon from their own perspective has always been a key message of the Siona. And as a young filmmaker with the privilege of collaborating with the Siona, there is a responsibility to communicate their message to Western society in a way that cuts through stereotypes and gets to the heart of things— to the profound, transcendent truth. In Adiela’s words, “I dream that our young people will defend our territory. And that will be our legacy. We know that we’re cultivating the air, and that air will help another country that might not always have it. So it’s not just for us. It’s for the world.”

At home in Bogotá, in this time of Covid-enforced isolation, I keep thinking of the mochilero birds that fly in a swarm every evening past the riverfront Siona community of Buenavista, and in my ignorance I’m not sure if they’re going out to hunt or heading in for the evening. Either way, they build the most beautiful nests, which hang heavy in the tropical heat and protect their residents in the evenings when the wind sweeps through the river and carries the heat off somewhere else. That’s when we settle into our hammocks in Taita Pablo’s house, when it’s dark out, when it’s still, when the heat dissipates. He puts a plantain leaf on the floor, lights incense on the staircase up to the entrance of the house, and I’m also not sure if it’s to greet someone or keep someone out. His song begins, loud at first, he told me he was speaking “to the spirits of the rain that night, to clean everything on the land and to prepare a clear night of visions for his disciples”– some ten men of the Indigenous guardia (land patrol) we were drinking Yagé with. Taita Pablo sings strongly, blessing this space which is now warm, as energy swirls around with the journeys and teachings of all the men gathered. I felt welcomed in an embrace I’ve only felt before when returning home to my mom’s kitchen, welcomed by my brother and sister with embraces and the offer of drink and food. It was the same. I sit on the floor in front of Taita Pablo. Mario encourages me to recognize what the Yagé had given me and to thank the Taita. I do so, and we make our pact to work together to tell the story the Siona want to tell to the world. I hope the world will listen.

Tom Laffay is an independent filmmaker based in Bogotá, and is a recipient of the inaugural 2020 Andrew Berends Fellowship. SIONA: Amazon’s Defenders Under Threat, commissioned by The New Yorker, is an intimate portrait of Siona leader Adiela Mera Paz who works to clear landmines from her ancestral territory in hope that her people may one day return. He is now producing his first feature length film with the Siona Nation. www.tomlaffay.com