I’ve been walking with my Kofan colleagues for three days, deep into intact Amazonian rainforest. While a dozen woolly monkeys are howling over our heads and we take in the extremely rich fauna of this pristine land, we are the only humans for hundreds of kilometers around. Although the lactic acid built up in my thighs feels like the result of an exhaustingly long trek, my GPS indicates a very different story. Making our way through the very thick jungle cover with a machete on an unceasing slope, we have barely made any progress in the past four hours.

The Kofan’s goal? Track down and map the traditional hunting trail used by elders in this remote corner of Sinangoe’s A’I Kofan ancestral land at the foothills of the Andes in the Ecuadorian Amazon. The challenge of the day: the strikingly beautiful Cofanes River has swollen during heavy rains, engulfing our path and forcing us to climb up the canyon to the next river curve in order to make headway. Trek after trek, month after month, these are some of the perils and hardships the Kofan of Sinangoe face. Their land patrol is in charge of keeping a constant and watchful eye on their ancestral land as they head deeper into their territory on their mapping quest.

Sinangoe’s wild and intact land at the foothills of the Andes, an area of the Amazon that is all at once difficult to explore but beautiful to witness. The mapping team during this expedition: Members of the Kofan land patrol, Nixon Andy (forefront), Neycar Guaramag, Wider Guaramag, Marcelo Lucitante, Jeferson Quenama, Darwin Yiyoguaje, Juan Herrera, Abran Quenama, Francisco Criollo, Oswaldo Lucitante and Amazon Frontlines’ Environmental Monitoring Coordinator, Nicolas Mainville.

This expedition is one of many expeditions to have taken place over the past six months, and is part of a community-led process emerging from the Kofan of Sinangoe’s historic victory against gold mining concessions granted by the Ecuadorian government. In the wake of this unprecedented legal victory for indigenous rights and resistance against mining interests in the Ecuadorian Amazon, which effectively blocked a gold rush and demonstrated in court that the the Ecuadorian government was not fulfilling its obligations to protect their land even though it lies within a National Park, the A’I Kofan of Sinangoe decided to launch a process to reclaim their land and gain official title over it. The first step of this process is to map their entire ancestral land at the headwaters of the Aguarico River.

In such remote and risky conditions which define field work in the Amazon, the adrenaline rush is constant. But the confused faces of my Kofan colleagues trigger my nerves as they evaluate the steep wall and waterfall now blocking our way. What do we do now? It’s getting late, but there is no way we can camp here, we have to climb and locate the ancient trail.

While the leader of the Kofan’s land patrol or guardia – a respected and knowledgeable Kofan hunter nicknamed “Viejo” (Elder) – decides to face the challenge by climbing a tree that serves as a ladder, others from the group decide to climb the rock wall directly. I opt for the second option but quickly regret it: climbing this slippery, mossy, vertical wall with my heavy backpack ends up being a very risky. Now half way up, and with no other path visible, I have no choice but to keep on climbing. Pairing survival instinct with sheer luck, I succeed in reaching the top, drained but ecstatic. Equipped with his trusted cell phone always at hand during these expeditions, Viejo adds a waterfall icon on the digital map being built, and takes a picture which is then integrated into the map before we move on. The little piece of technology has been equipped with an App made by our partners at Digital Democracy, called Mapeo Mobile, which allows the Kofan to build their community map with pictures, notes and icons all at once.

Facing a steep wall and waterfall, our leader “Viejo” decides to climb a fallen tree to reach the top of the waterfall and to seek out other possible routes. Over 30 waterfalls like this one have already been mapped by Sinangoe’s mapping team.

Into The Land Of The Invisible People

This mapping trip, like many other excursions which the Kofan have been conducting over the past year, brings us into remote corners of Sinangoe’s territory. There is something profoundly humbling about going deep into sacred lands and witnessing the pathways used by ancestral peoples. The path we have lost sight of is part of a network of hunting, fishing and gathering trails that have been used for hundreds of years by Sinangoe’s ancestors.

The untouched, unspoiled and uncharted deep jungle, according to the Kofan cosmovision, is home to the “gente invisible” (invisible people or spirits) who watch over everything. To venture off the trail is to disturb the spirit world, something the Kofan tend to avoid as much as possible. It is thus with relief that, once we clamber to the other side of the ridge, we find our lost trail by the river bank.

Of the ten Kofan colleagues I am trekking with, four of these young men have never been here before. Walking in the footsteps of their ancestors and discovering their land is part of the community’s process to reclaim their land and assert their autonomy as its owners and guardians. It is also an important step in ensuring that knowledge is transferred from one generation to the next. The mapping process, which allows the Kofan to identify key features of their land, from burial grounds to fishing hotspots, to medicinal plants and animal tracks, marks a steep learning curve for those who are discovering the depths of their land land for the first time. 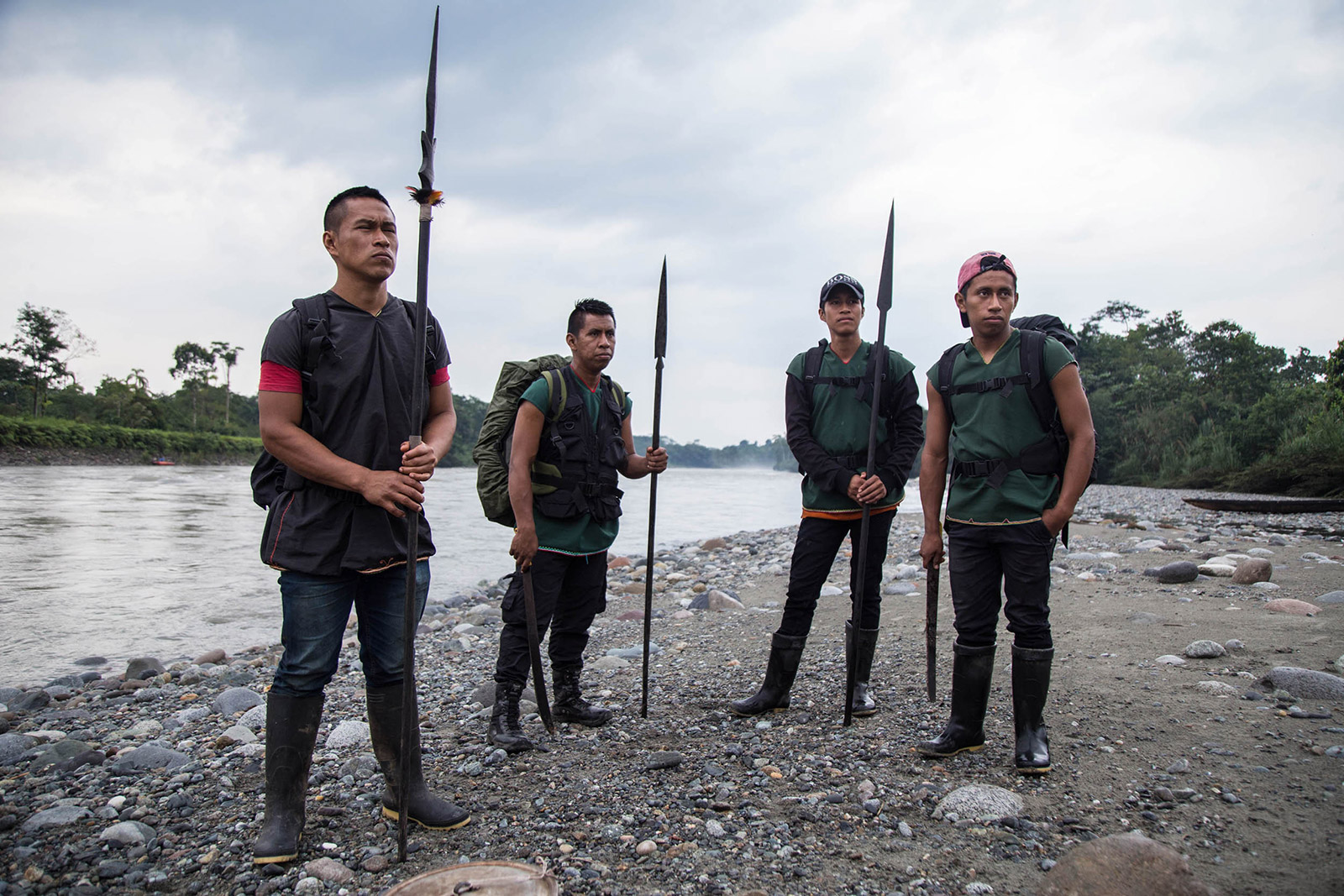 This Is No Ordinary Jungle

Over the past three days of our trek, we have spotted and mapped numerous sacred sites, fruit trees, material for handicrafts and countless trails of deer, tapir, agouti, wild boar, jaguar and the famous but endangered spectacled bear. Documenting so much diversity and richness along our trail makes our progress slow but highly valuable for the community and the mapping process they launched with Amazon Frontlines and our indigenous partners of the Ceibo Alliance. Every observation along the trail demonstrates the formidable generosity of their land and the Kofan people’s deep connection to it. 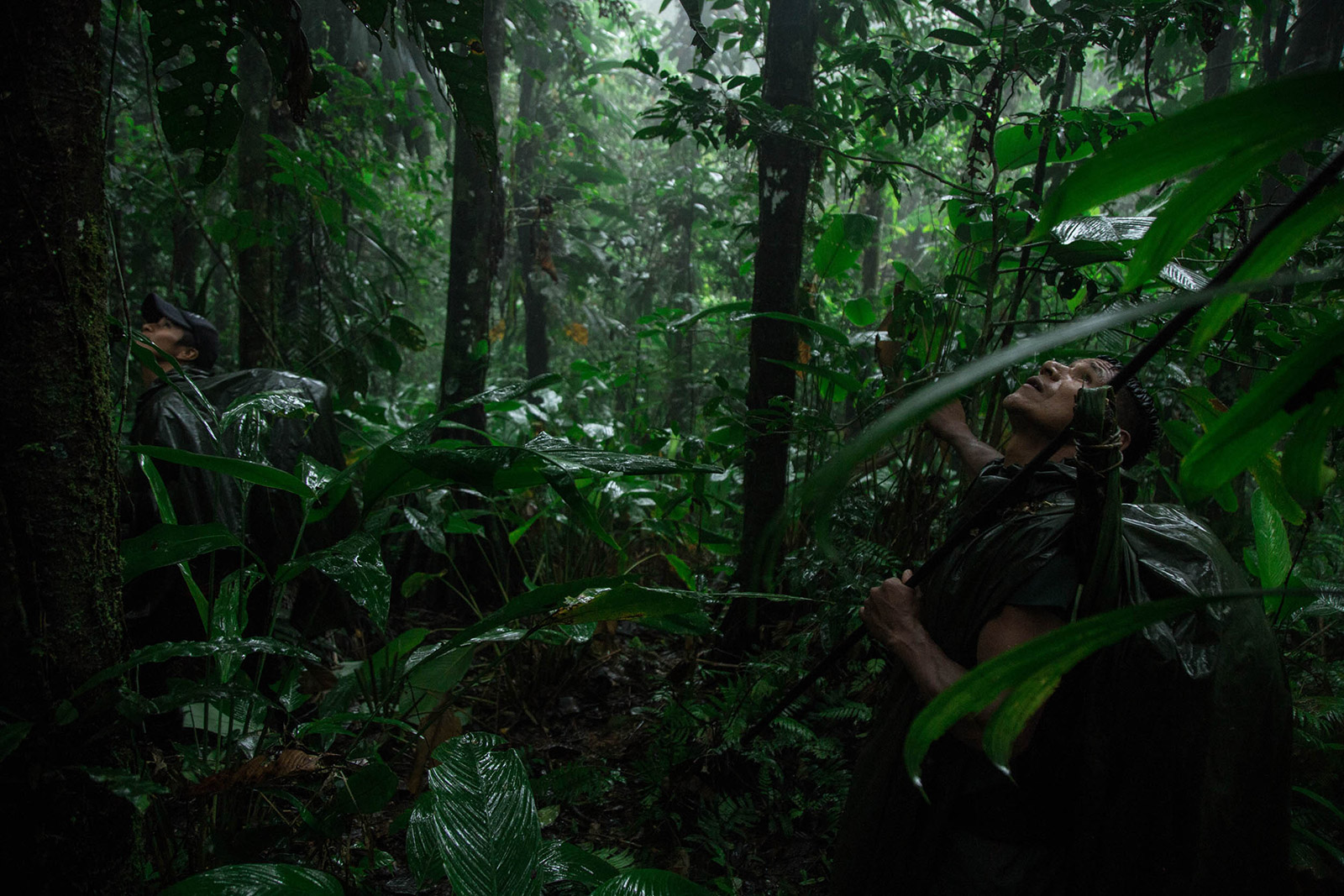 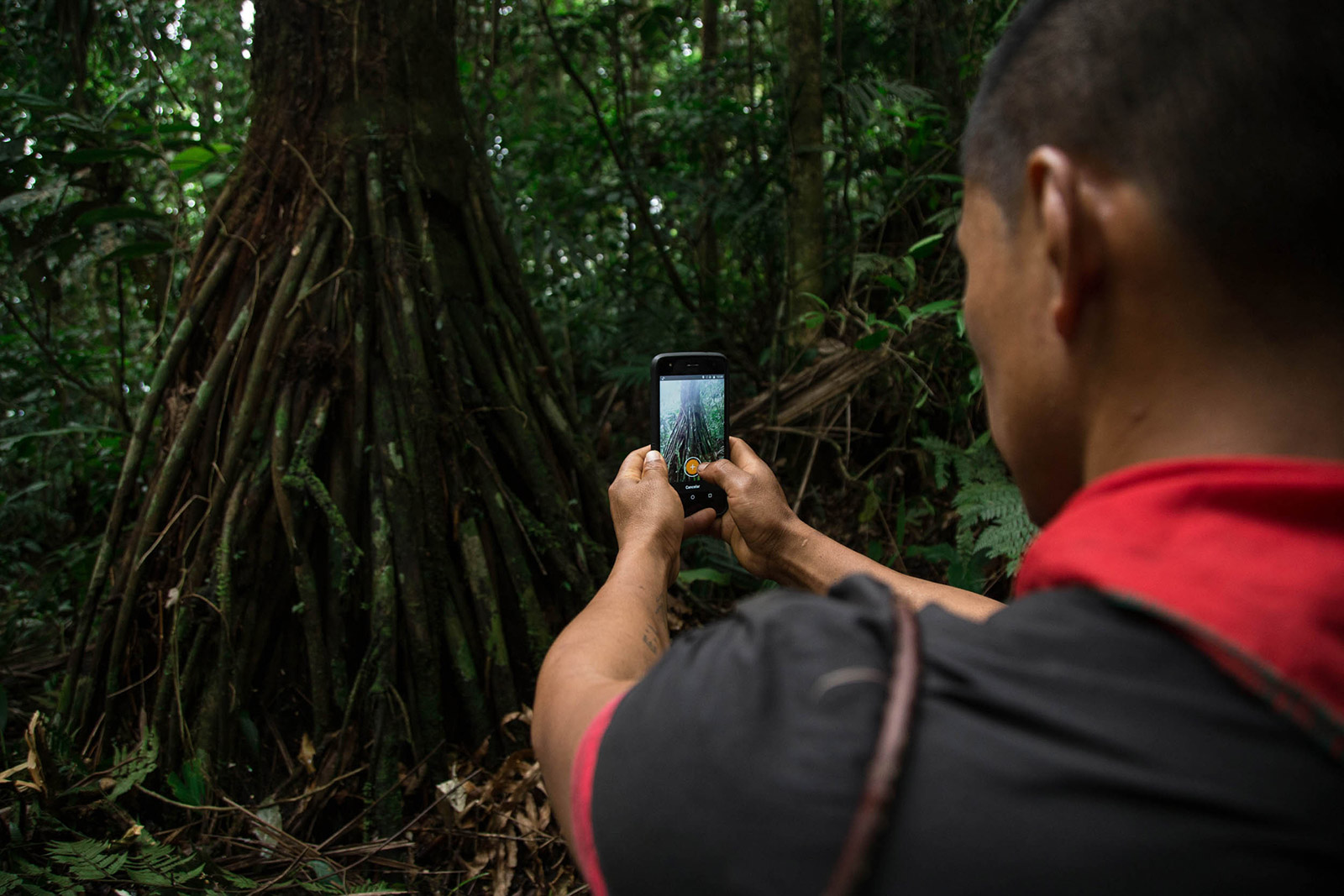 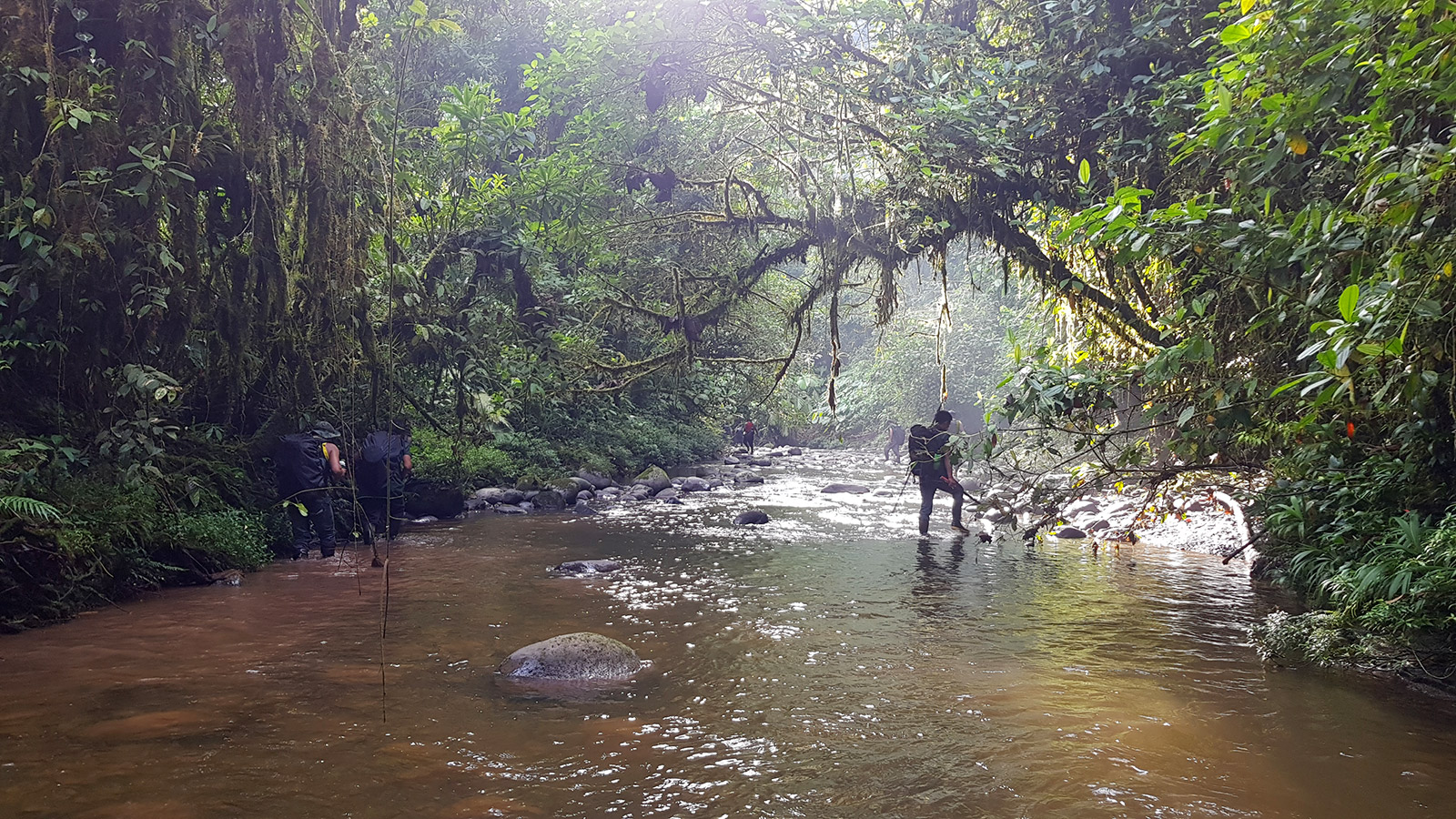 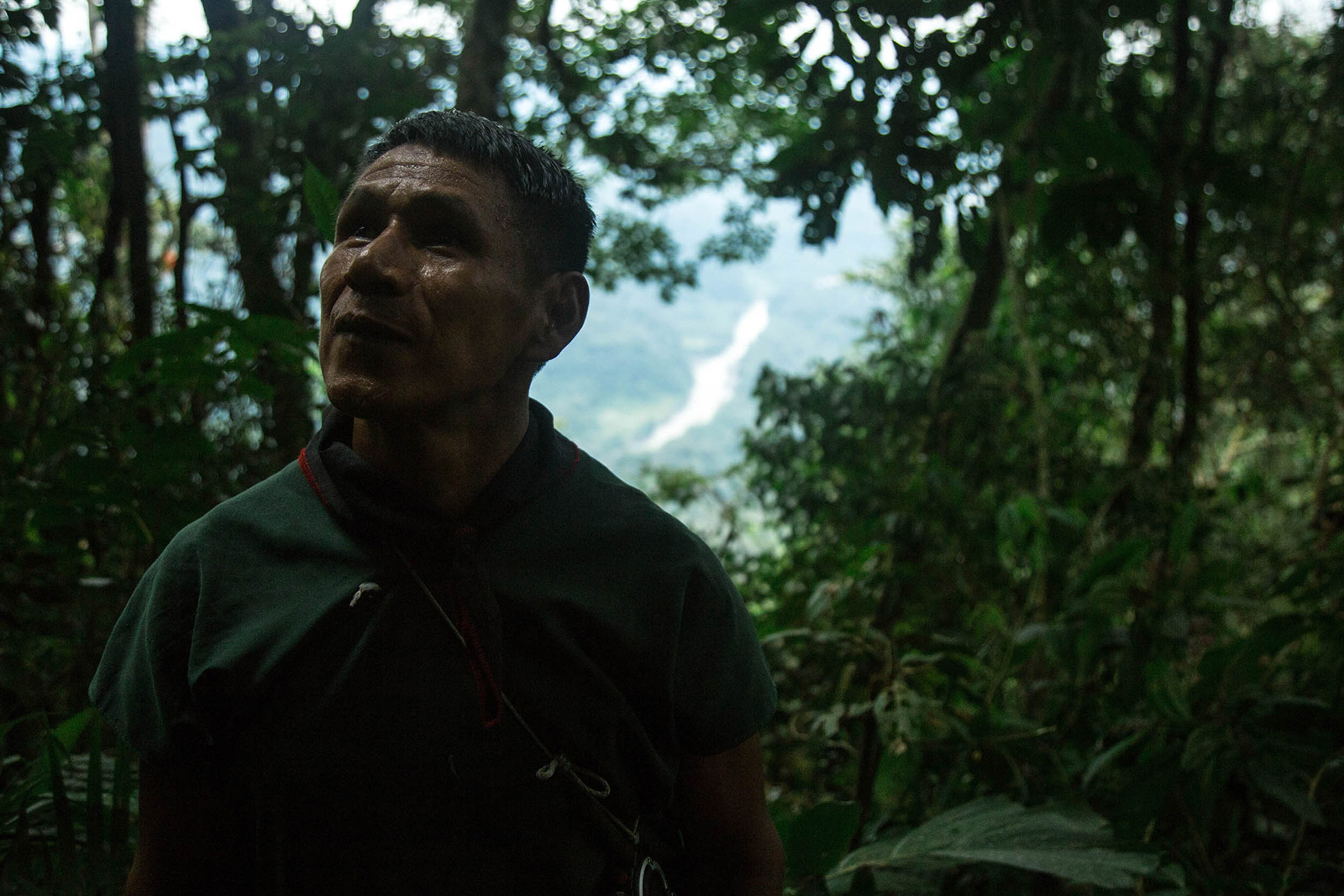 Mapping A’I Kofan ancestral land, which is covered by one of the richest forests on earth, is a deep process for the Kofan involving remembering and recovering traditional ecological knowledge on the uses and connections with their land.

But this is no ordinary jungle. The Amazonian foothills of the Andes, and this specific region at the headwaters of the Aguarico River, have been called the most biodiverse place in Ecuador by the Chicago Field Museum and therefore one of the most biodiverse places on earth. Meanwhile, my Kofan colleagues keep on spotting new plants and adding them to the map on their cellphones.

Using technology and their ancestral knowledge, over 1 900 features and about 70% of their land have already been mapped, and soon the Kofan’s efforts will feed into a legal titling process to reclaim their land. In the wake of their historic and unprecedented legal victory against gold mining last year, a Provincial Court ruling demonstrated that the Ecuadorian government fell short from fulfilling its obligations to protect these lands which are part of the protected Cayambe-Coca National Park. As part of their ongoing struggle to defend their right to self-determination and governance, the Kofan of Sinangoe are now launching a titling process in order to finally be recognized once and for all as the ancestral and legitimate stewards of this remote corner of the Amazon.

Three days away from any source of electricity or phone signal, exhausted but enthralled by the beauty and richness of the land, we finally set up camp for the night. After a quick meal, I slumber into a deep sleep, sharing my Kofan partners’ dreams of the struggle ahead to ensure this amazing rainforest stays intact for centuries ahead. Over the coming months, the Kofan will continue to trek deeper into their territory, mapping out their entire ancestral land, and taking legal action to enforce the government’s compliance with the Court’s historic verdict in defense of their land and lives.

Facing a steep wall and waterfall, our leader “Viejo” decides to climb a fallen tree to reach the top of the waterfall and to seek out other possible routes. Over 30 waterfalls like this one have already been mapped by Sinangoe’s mapping team.