29th April 2020.Coca, Ecuador– T​his morning Indigenous peoples launched a lawsuit against the Ecuadorian government and private and state oil companies in the wake of one of the country’s biggest oil spills in over a decade. Earlier this month, on April 7th, an estimated 15,000 barrels of crude oil gushed into two of the country’s most important rivers following the rupture of two major oil pipelines in Ecuador’s northern Amazon. The spill affects over 2,000 indigenous families and has left an estimated 120,000 people without access to the river’s fresh water.

The legal action was filed in the Provincial Court of Puerto Francisco de Orellana (also known as “El Coca”) in the region of Sucumbios by the Amazonian indigenous organization (CONFENIAE) and Kichwa indigenous federation (FCUNAE), national and international human rights organizations, ranking Catholic bishops of two impacted provinces, and affected families. The lawsuit names the Ministry of Energy and Non-Renewable Resources, Ministry of the Environment, state-owned oil company PetroEcuador, and OCP Ecuador (private company that owns one of the pipelines), and demands urgent environmental remediation, remedies for affected peoples, and repair or relocation of the pipelines to prevent future spills.

Through testimonies gathered from dozens of community members, the plaintiffs allege that the oil spill has violated their constitutional rights to territory, health, information, water and food sovereignty, a clean and ecologically balanced environment, and the rights of nature. Despite warnings for years from geologists and hydrologists that severe erosion along the Coca River put the pipelines at risk, no action was taken by the government. In February of this year, scientists visited the river to investigate why the San Rafael Waterfall—one of Ecuador’s most spectacular falls—had collapsed. They concluded that a controversial Chinese government-funded hydroelectric dam above the waterfall depleted river currents and accelerated erosion under the ruptured oil pipelines.

The Ecuadorian government created an Emergency Committee charged with supervising the application of measures to mitigate environmental impacts caused by the spill and pipeline ruptures. Indigenous and human rights organizations are denouncing the government’s failure to undertake a proper clean-up effort, provide communities with water and food, and provide timely information about the magnitude or scope of contamination to indigenous communities downriver. Moreover, indigenous peoples are concerned that the pipelines remain at risk for future spills, and experts are warning that fissures detected in the hydroelectric dam possibly caused by the same land erosion could lead it to burst and trigger yet another disaster of monumental proportions.

The spill follows a tragic legacy of over a half century of oil contamination and human rights abuses in the Ecuadorian Amazon, where nearly 70 percent of the rainforest has been leased to oil companies. This latest spill affects hundreds of miles of rainforest riverways, and will have devastating environmental impacts in one of the most bio-diverse areas on the planet. Furthermore, as Covid-19 has already forced indigenous peoples into isolation, contamination from the spill has left dozens of indigenous communities stranded without a safe source of food and water.

Ecuador’s crude exports, seventy percent of which are bound for the United States for refinement in California, have been temporarily suspended until at least the end of the month. As the country grapples with one of the most aggressive coronavirus outbreaks in Latin America, the country’s oil-dependent economy has been struck by the collapse in its export revenues and plummeting global oil prices, leading experts to suggest that Ecuador may face one of the worst recessions in Latin America. Indigenous and civil society groups are hoping that this lawsuit, combined with the nation’s colossal foreign debt, will inspire reflection and debate over continued fossil fuel extraction in the Amazon, our world’s most important rainforest.

This lawsuit comes almost exactly one year after the Waorani people of Ecuador won an historic legal case against the government, which protected half a million acres of primary rainforest from oil drilling.

The Provincial Court is expected to hold the trial, which due to the exceptional circumstances of the COVID-19 pandemic will take place virtually, within a few weeks. The plaintiffs have also filed an injunction to require the state to take immediate action for the environment and the impacted communities pending trial and judgment.

“We are already suffering from various illnesses caused by oil contamination, and now we are also facing this pandemic. We face discrimination as the State has failed to include us in its emergency plans yet again. This is why the families, represented by FCUNAE, decided to join this lawsuit: we don’t want this to happen ever again. ”
– Carlos Jipa, Kichwa leader and President of FCUNAE, the region’s Indigenous Federation of United Communes

“Although the rupture of the pipelines was not intentional nor caused by direct actions, the authorities and companies named in the lawsuit were acting negligently and omitting information about the situation, and failed to monitor despite prompt warnings regarding the erosion affecting the San Rafael waterfall. By not taking action to prevent the risks, they failed to comply with their constitutional duty to protect people and nature, as enshrined in article 389 of our Constitution. We will be holding the State accountable and responsible for this oversight.”
– Lina Maria Espinosa, Attorney for the case from Amazon Frontlines

“Oil spills are the death of biodiversity and life. The Ecuadorian State must remedy and suspend all extractive activities and shift towards post-extractive economic development. Oil exploitation and the extraction of other minerals pollute the environment, and they are no longer profitable, they’re now being rejected across the globe. This pandemic has shown the world very clearly that oil doesn’t sustain life. Instead, it is the forests and harvests of indigenous peoples and rural communities that are keeping us alive today.”
– Marlon Vargas, President of CONFENIAE (Confederation of Indigenous Nationalities of the Ecuadorian Amazon)

“This lawsuit clearly implicates the Ecuadorian State and its institutions as responsible for this environmental disaster. This massive spill is likely the worst the Ecuadorian Amazon has seen in a decade. The Court must establish measures to guarantee and restore the rights of nature and indigenous communities and take steps to prevent future oil spills.”
– Carlos Mazabanda, Amazon Watch, Ecuador Field Coordinator 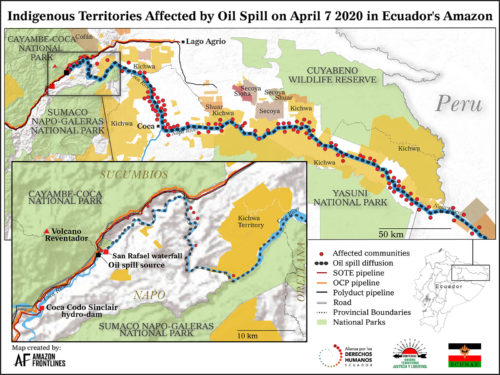