“Look at those fresh boot tracks… these are not from one of us,” says a member of the Siekopai land patrol, pointing to tracks that cross their path. Along with nine other land patrols, they have been walking for two days, venturing deep into their ancestral land to detect and monitor invasions. The further they go, the more signs they see of an unwelcome visitor: poachers.

Following the fresh tracks, Hurlem Payaguaje, the coordinator of the Siekopai land patrol from the community of San Pablo and member of Ceibo Alliance, locates a recently built hunting blind. The makeshift platform, simple but efficient and strategically located, allows the hunter to wait up in the trees overnight for large mammals like brocket deer and lowland paca to come and eat fallen fruits. “Someone was here last night but didn’t kill anything. At least not this time.” The men are nervous but determined.

The rainforest that has been home to the Siekopai Nation of Ecuador for thousands of years is as beautiful and complex as the Amazon can be: giant trees, lianas and epiphytes, noisy insects and birds, and creeks teaming with life. But over the past century, the Siekopai’s once vast territory has been reduced to an island of jungle along the Aguarico River, surrounded by palm monocultures, oil fields and cattle ranches.

Over the past months, the Siekopai of San Pablo have increased their monitoring of illegal activities inside their land using technology such as GPS, drones, photographic cameras, and camera traps. With the support of Amazon Frontlines and Ceibo Alliance, the Siekopai are gathering data to provide authorities and civil society irrefutable evidence of the damages caused to their ancestral lands and the systematic violations of their rights to territory and self-determination.

The use of camera traps has allowed the Siekopai and other nations to gather clear evidence of poaching and other illegal activities inside their land. In this video, poachers equipped with shotguns and accompanied by hunting dogs carry a dead puma and a deer.

The Siekopai Nation, with a population under 750 people, has faced wave upon wave of invasion over the past decades, much like other neighbouring Indigenous peoples of the Ecuadorian Amazon. From loggers to poachers, fishermen and illegal settlers, threats have multiplied since the petroleum and palm oil industries built their extended network of roads and infrastructure encroaching on Indigenous territories. The increased poaching that the Siekopai are witnessing inside their land is just one of the many consequences of advancing colonization towards remote and pristine areas of the forest. As the frontier expands, so does road access, which in turn increases deforestation and resource extraction. Across the Ecuadorian Amazon, deforestation rates increased sharply during the pandemic, making 2020 the second worst year for forest cover loss in the past two decades, with a total over 436 000 hectares of pristine forest cleared in the past twenty years.

Timeline of satellite processed images of forest cover loss spreading across the Kokaya River area inside Siekopai ancestral land, Napo River watershed, Ecuadorian Amazon, from 2001 to 2021, showing how illegal settlers moved in around 2012-2013.

Amongst the most aggressive forms of land invasion is the establishment of illegal settlers inside Indigenous territories. In the case of the Siekopai Nation, it started about fifteen years ago when a handful of illegal settlers invaded the headwaters of the Kokaya River, a tributary of the Napo River. A decade later, the illegal settlers had cleared over seventy hectares of pristine rainforest mostly for cattle ranching, and degraded another hundred hectares through selective logging, poaching and understory clearings. 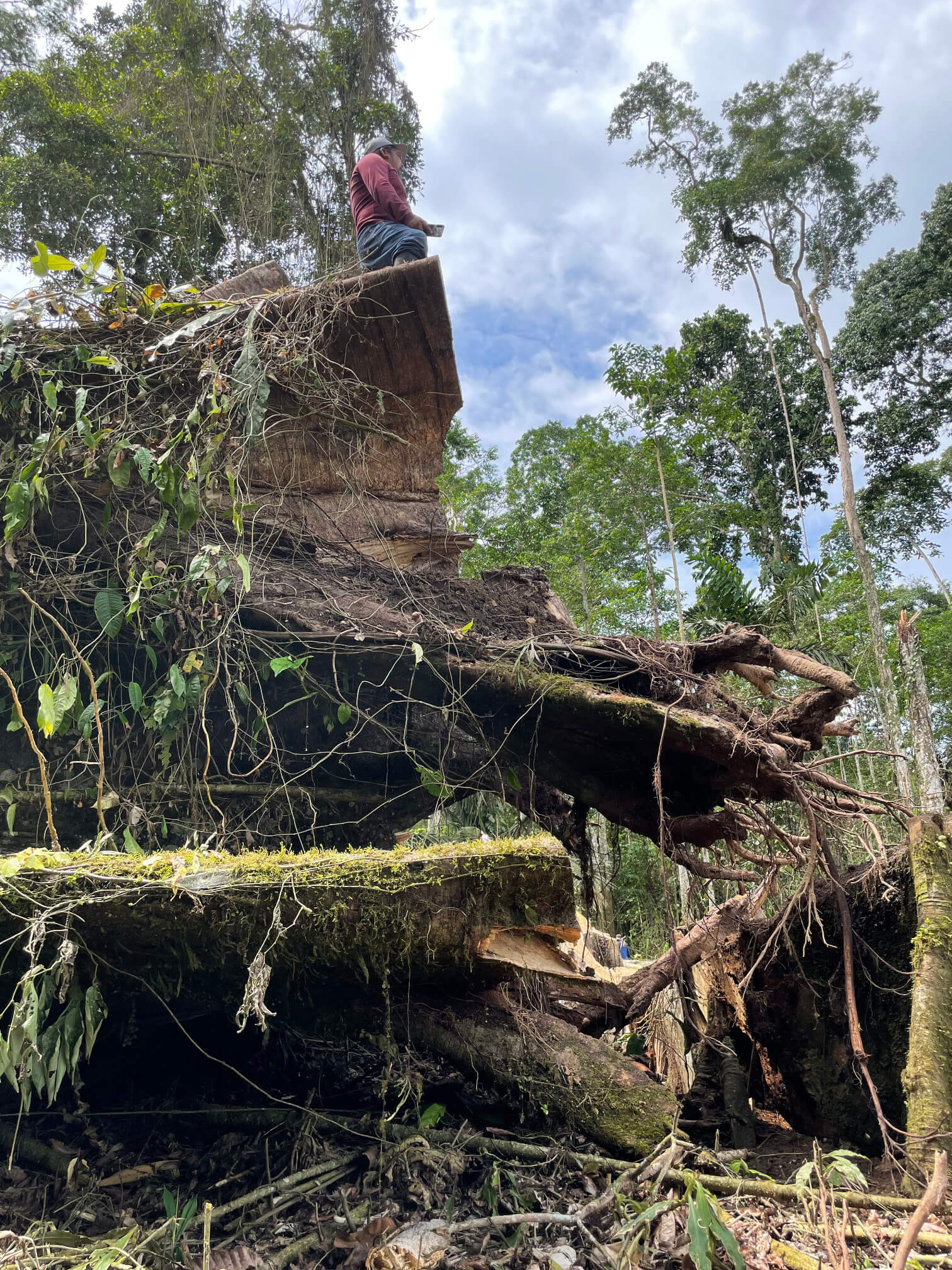 Justino Piaguaje, a prominent Siekopai leader, stands on top of a recently cut sacred Kapok tree, in the Kokaya area invaded by illegal settlers, May 2021.

Back in the field, as the Siekopai land patrols cross the Kokaya river into the invasion area, one can only be shocked to see how drastic of a change there is. For the next six hours, the land patrol uses satellite deforestation alerts to guide their steps and document the recent clearings opened up by the settlers. With their GPS and mobile mapping devices in hand, they georeference houses and farmlands that are located inside the boundaries of their territory, while flying a drone to document the scale of the damage caused by fifteen years of farming. From the air, this small corner of the Amazon looks more like the plains of Nebraska.

Deforestation plots like this one observed in the Kokaya area in June 2021 have multiplied over the past years, transforming ancestral Siekopai rainforests into cattle ranches and farmland.

A historic day for the Siekopai, an inspiration for other nations

In the face of government inaction, Siekopai leaders decided to take matters into their own hands: on July 5th 2021, they handed over a forty-eight-hour eviction notice to the illegal settlers. Forty-eight hours later, over three hundred Siekopai people from six communities gathered in the Kokaya area, spears in hand and dressed in their traditional multicolored tunics, in a demonstration of strength and determination. Elders, youth, men and women took peaceful actions to regain control of their ancestral land and ordered the settlers to immediately evacuate the fifteen houses that had been built illegally on their territory. On that historic day for the nation, the Siekopai succeeded in recovering one hundred and ninety hectares of ancestral Siekopai land. Days after the event, the Siekopai were already spearheading a reforestation effort with over 6000 small trees to help their land heal from over a decade of cattle ranching. 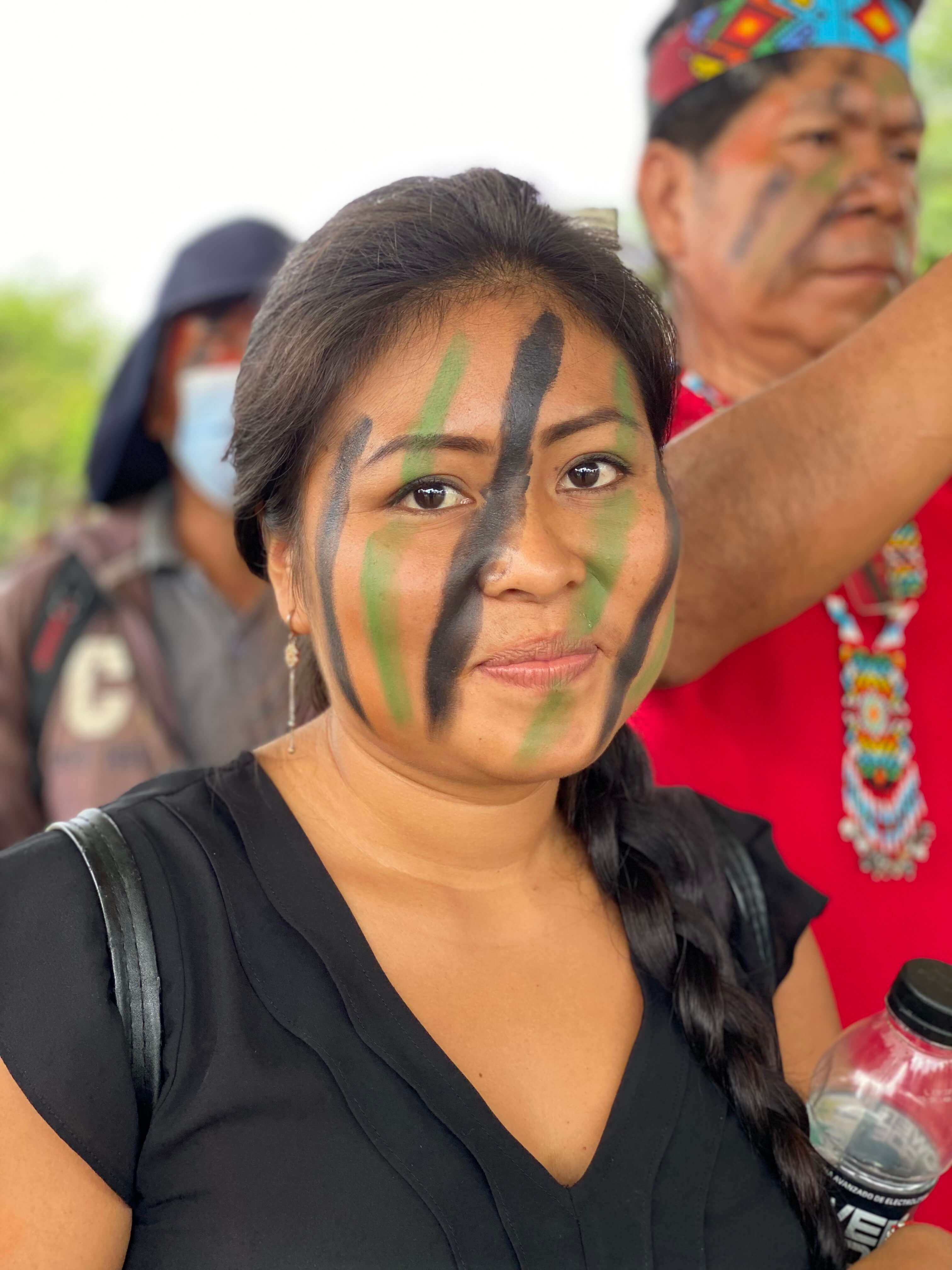 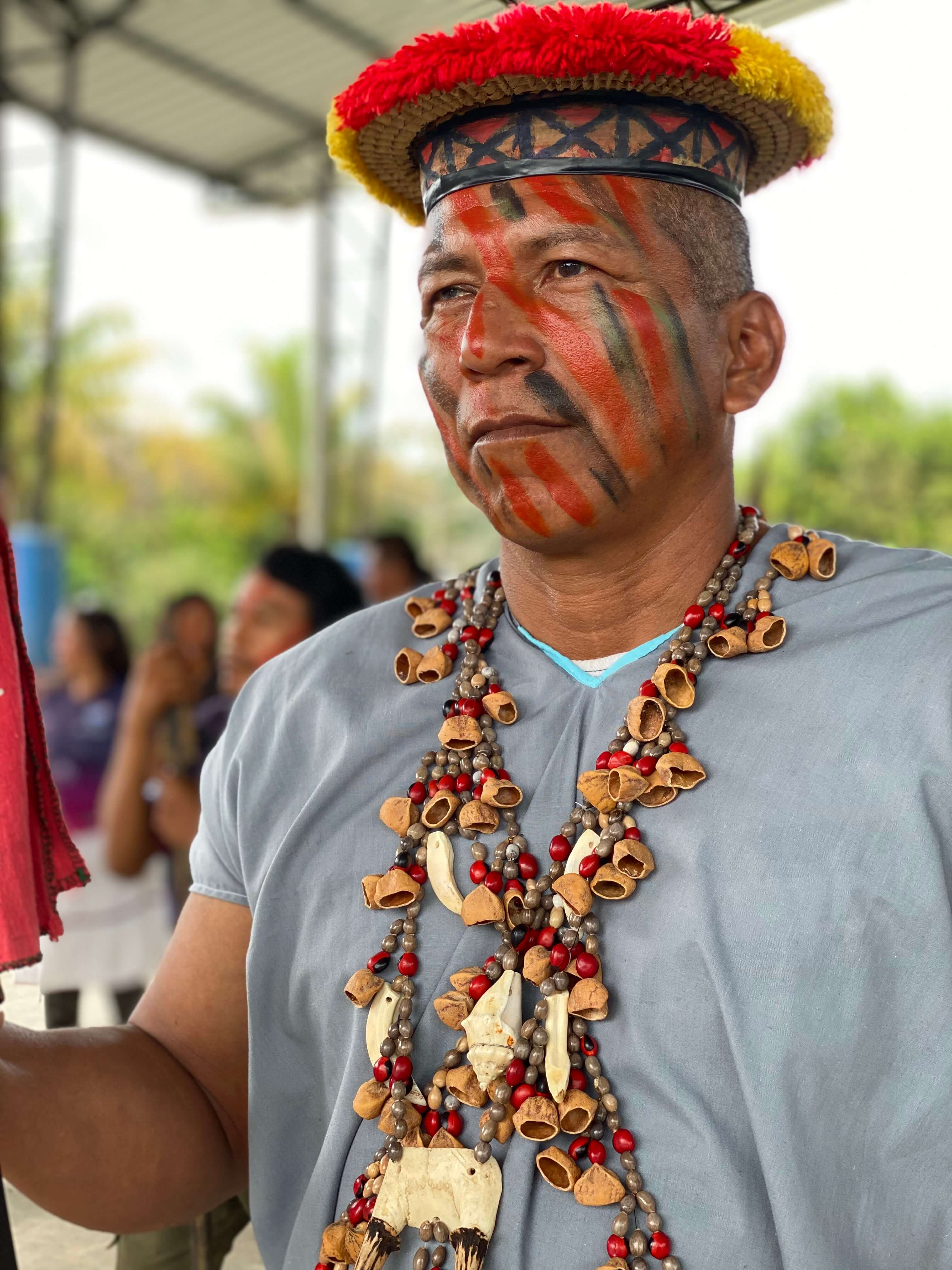 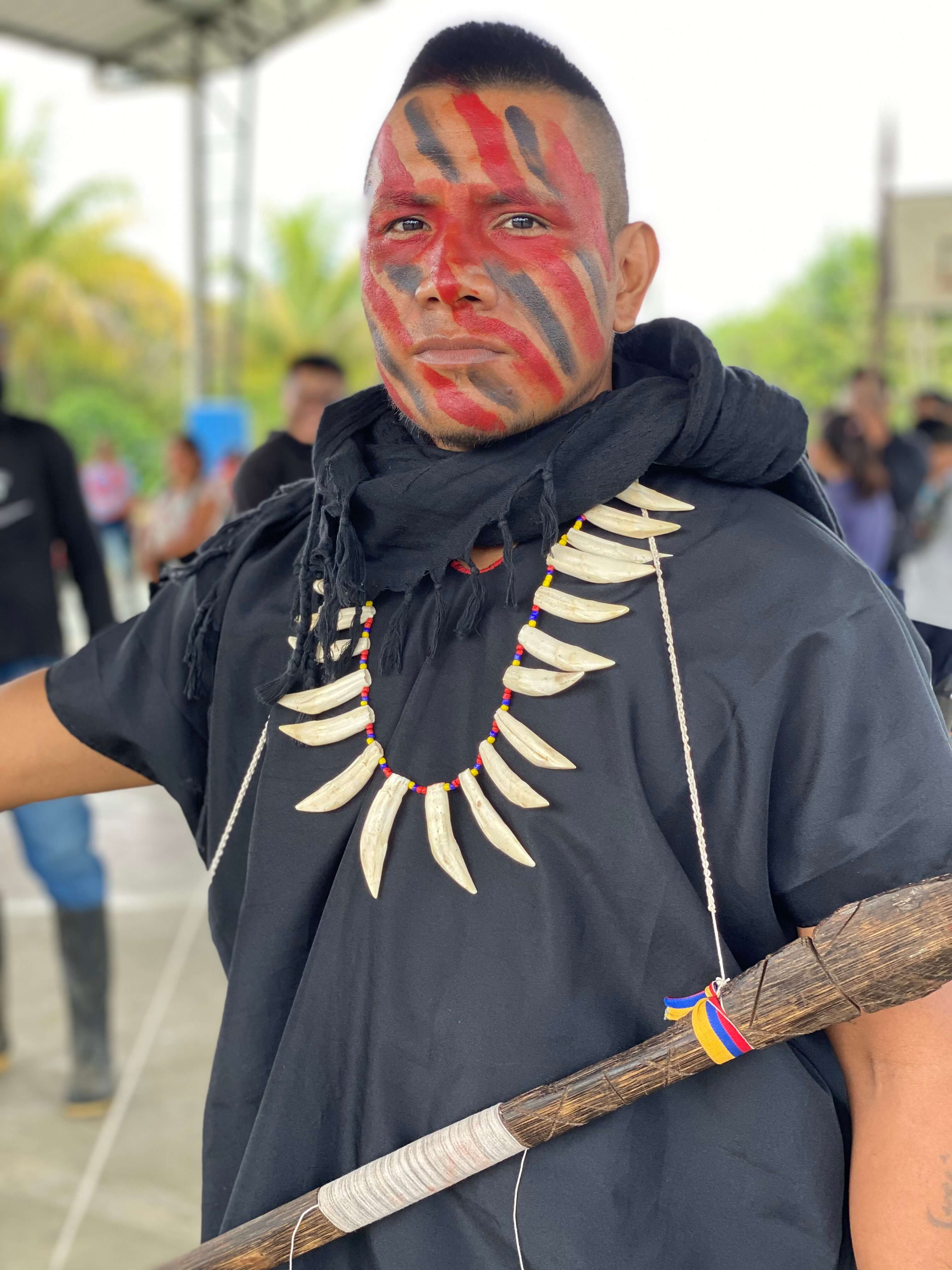 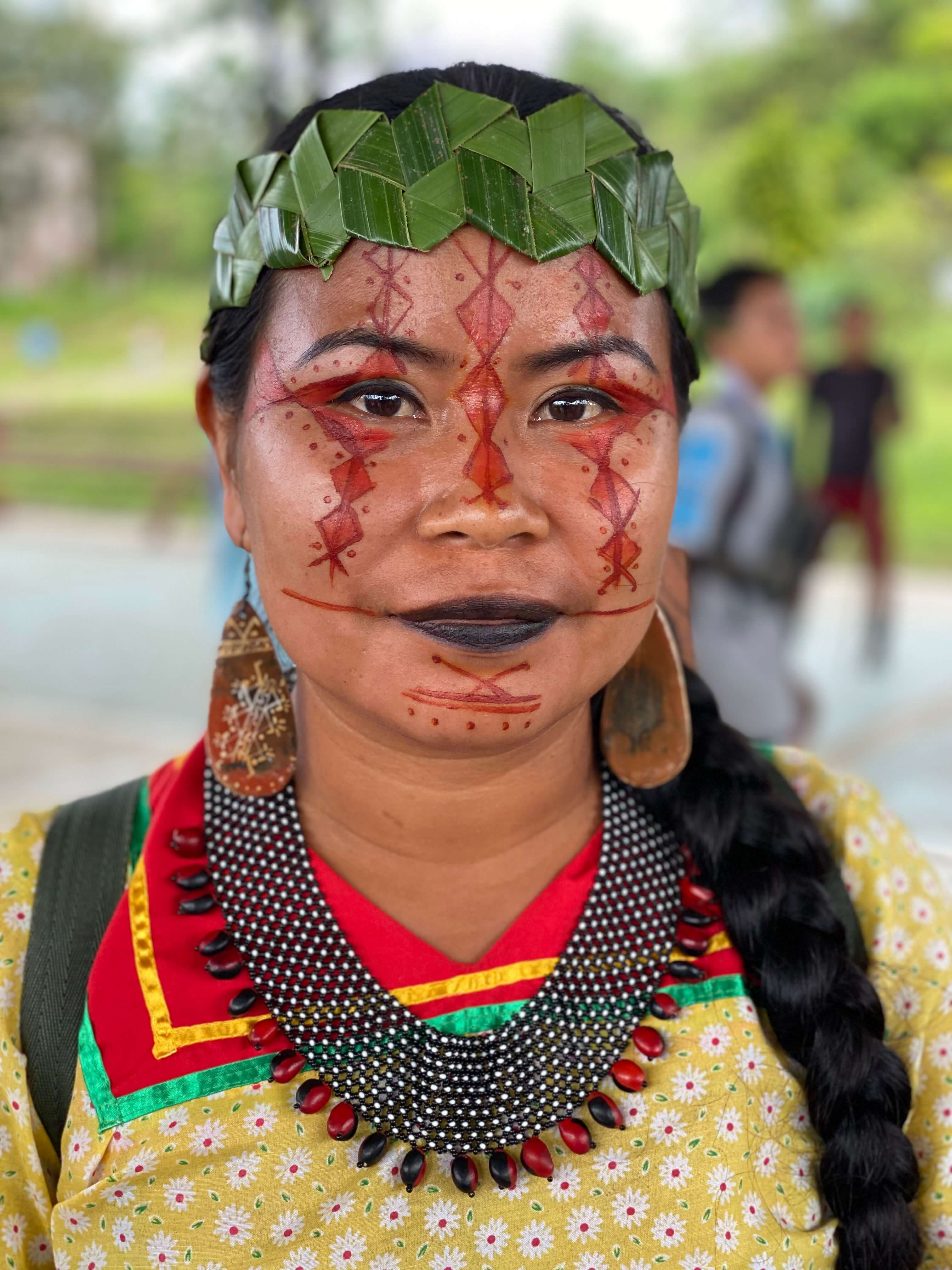 Siekopai youth and elders, women and men united to reclaim their people’s ancestral lands from the hands of illegal settlers

“We don’t want any conflict with our neighbors nor do we seek retaliation for the damage done to our land. We only ask that our territory and our rights be respected so that we can live in peace.”- Elias Piaguaje, President of the Siekopai Nation of Ecuador

With the support of the Ecuadorian Constitution (art. 57), two court rulings and international law, not to mention an increasingly robust archive of field data collected by community land patrols, the Siekopai have all the legal tools needed to reclaim what was stolen from them. However, they continue to face an uphill battle as authorities have shown a total disregard for applying the law. Moreover, the illegal settlers have demonstrated their obstinance in refusing to respect Indigenous land rights. Despite all the obstacles, the unity and strength that the Siekopai demonstrated on July 7th could trigger a wave of similar actions taken by other neighboring nations who struggle with similar injustices. For Hurlem Payaguaje and other land patrol members, this is a new beginning for Indigenous peoples of the northern Ecuadorian Amazon.

While the Ecuadorian constitution, international law and two court cases gives them full recognition of their right over their land, the Siekopai still have a long battle ahead in order to protect what is most precious to them.,/p>

In partnership with Ceibo Alliance, Amazon Frontlines accompanies, supports and trains community land patrols of the Siekopai, Siona, Kofan and Waorani nations in order to strengthen their territorial defense processes. Stay tuned for more stories from the ground!