The Water Protectors Of The Amazon - Amazon Frontlines

The Water Protectors Of The Amazon

As our planet’s mightiest river, the Amazon and its tributaries form the most intricate and biodiverse water system in the world. Without it, we would lose over one fifth of our planet’s freshwater supplies and our largest rainforest – the lungs of the world – would cease to exist. In the face of escalating pressures and threats from the industrialized world, indigenous peoples are at the forefront of movements to protect water and the rivers that are the lifelines to their ancestral rainforest territories.

Rivers are essential for the daily life of thousands of indigenous communities across the region, and have sustained their cultures, their livelihoods, and ways of life for thousands of years. Yet the health of the Amazon’s rivers is increasingly at risk. Unprecedented rates of deforestation and the advance of the extractive frontier are pushing the Amazon rainforest towards a dangerous tipping point, which could be less than thirty years away. Scientists affirm that at the current rate of deforestation, the Amazon’s rainfall will soon be drastically reduced, drying up rivers and the rainforest, and dramatically altering our planet’s climate, health, and freshwater resources.

Indigenous peoples are on the frontlines taking action and building solutions to defend rivers and their biodiversity for their peoples and the planet. In the following photo-essay, we take a snapshot journey through the Amazon’s rivers, and into the lives and struggles of the Amazon’s indigenous water protectors who are winning remarkable victories for rivers and the rights of nature despite all the odds.

The Sangay volcano is part of the mountainous system of the Eastern Cordillera of Ecuador, where several Amazonian rivers such as the Upano, Volcán, and Tigre, among others, converge towards the Amazon 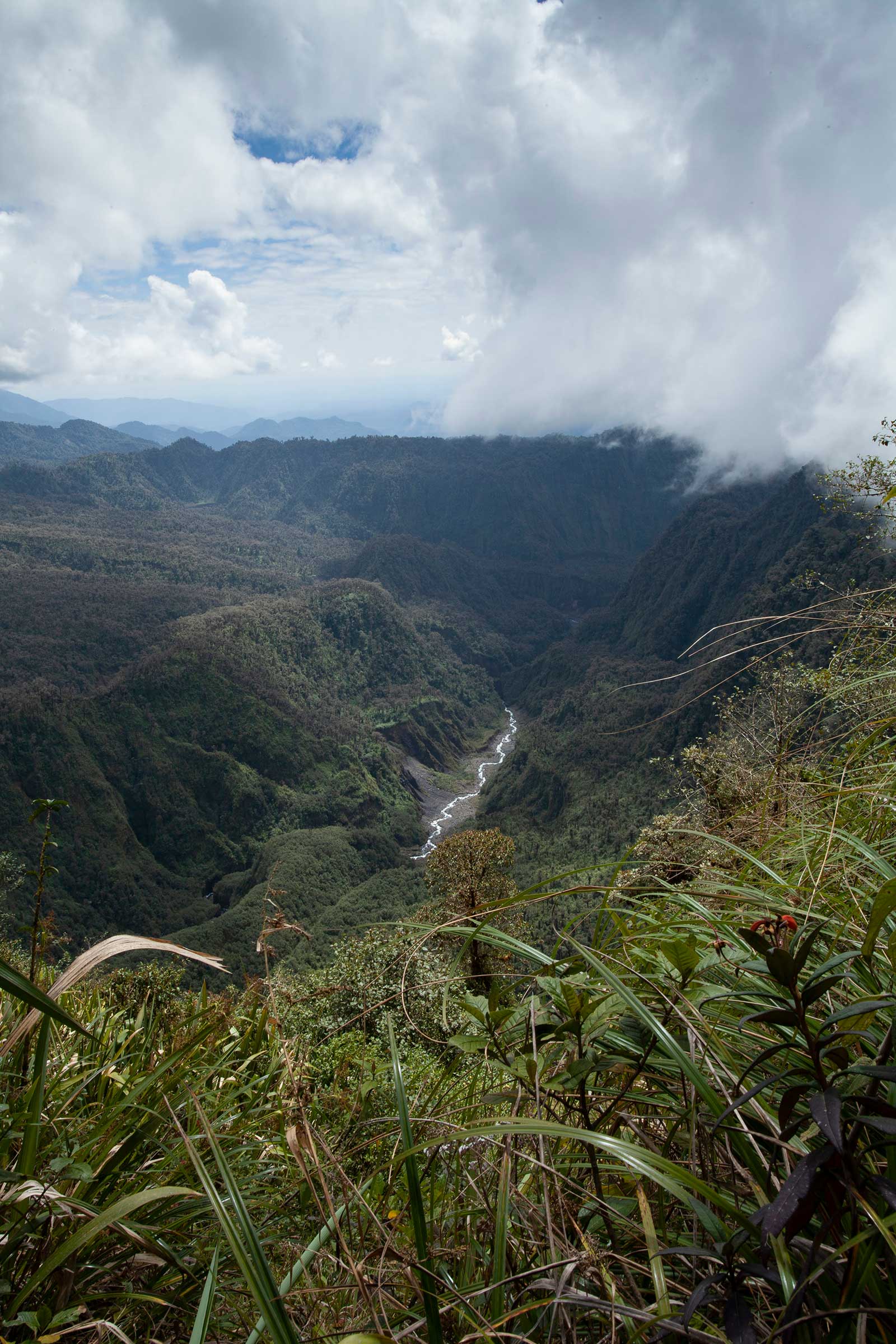 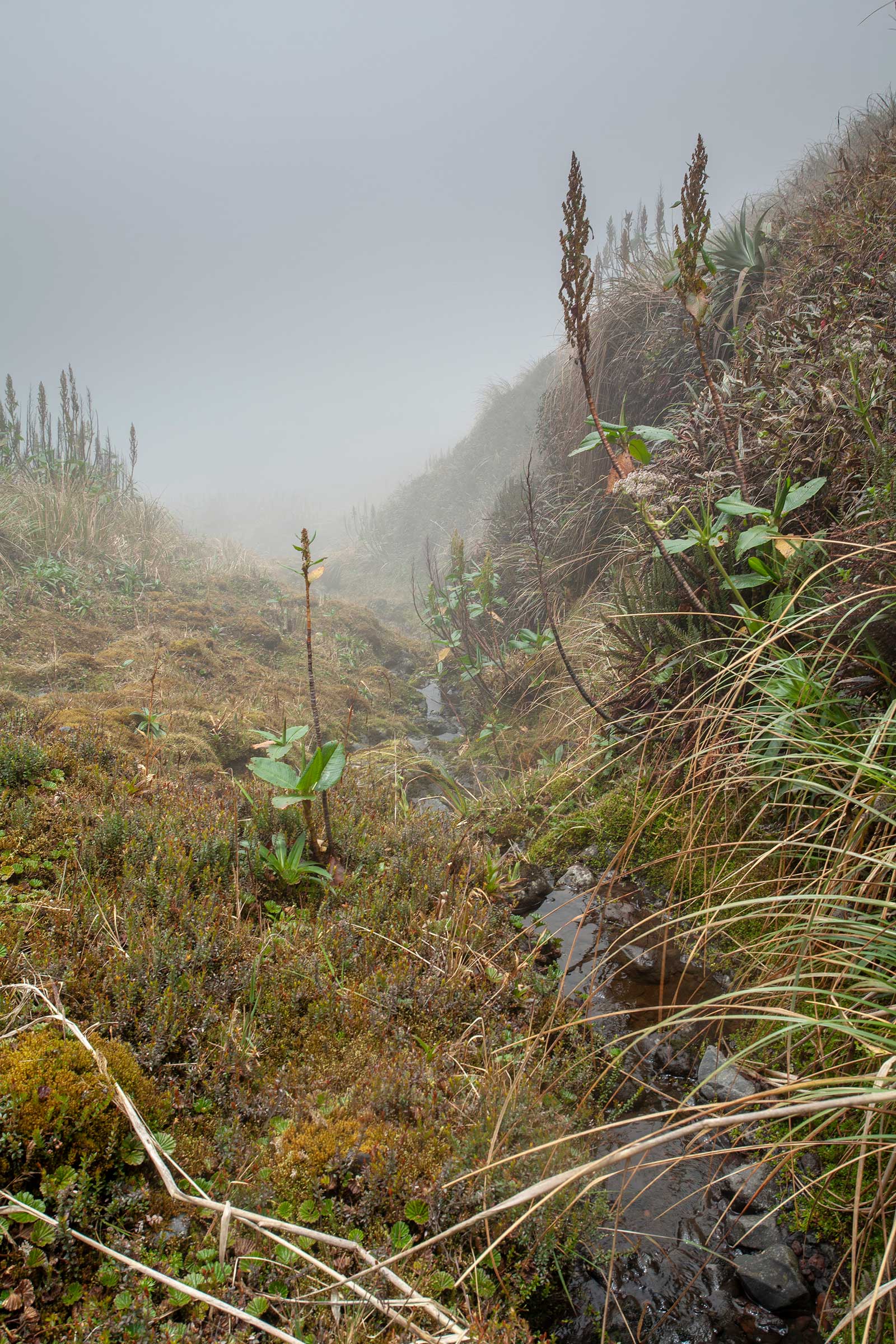 From the Andes, the Amazon and its tributaries flow through the countries of Peru, Bolivia, Venezuela, Colombia, Ecuador, and Brazil before meeting the Atlantic Ocean 6,437 kilometers (4,000 miles) from its headwaters 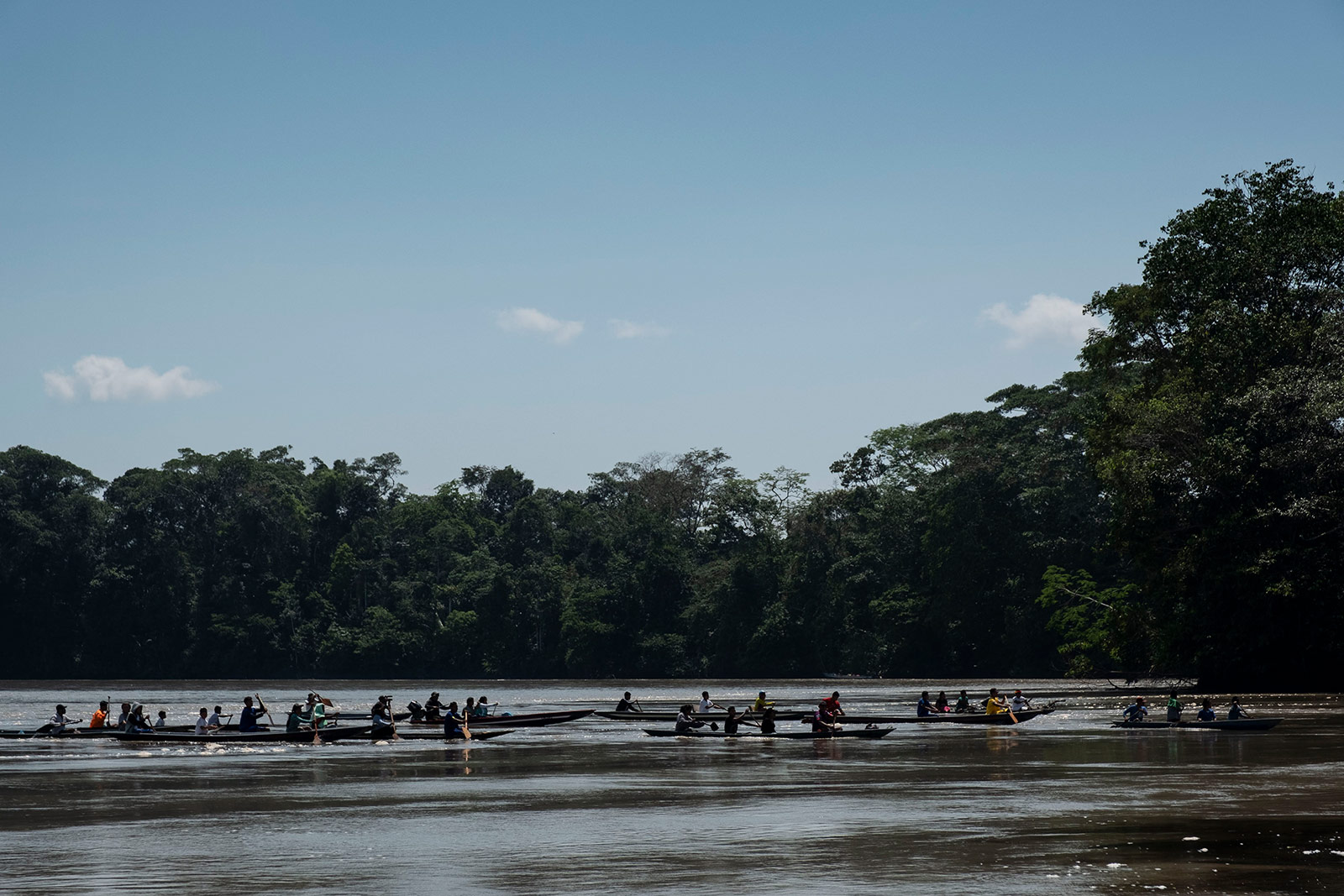 Rivers are the lifeblood of the Amazon rainforest, and provide the main means of transport for thousands of indigenous communities across the region 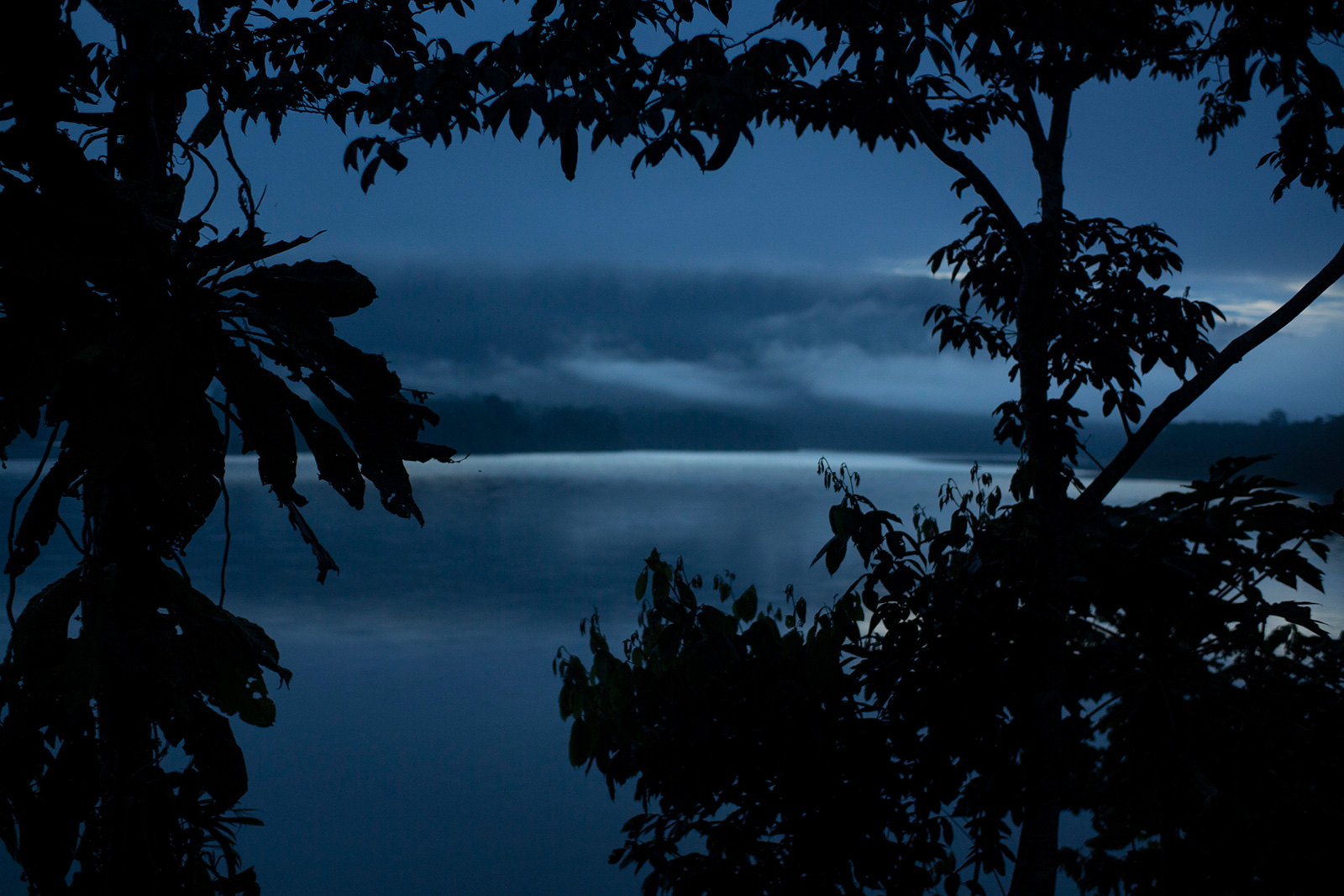 Indigenous cultures of the Amazon maintain a deep spiritual connection with rivers. According to their cosmovisions, water is a living being and spirit, and rivers are inhabited by many different beings and spirits, such as the powerful boa, which help to protect the harmony and balance of the Amazon. 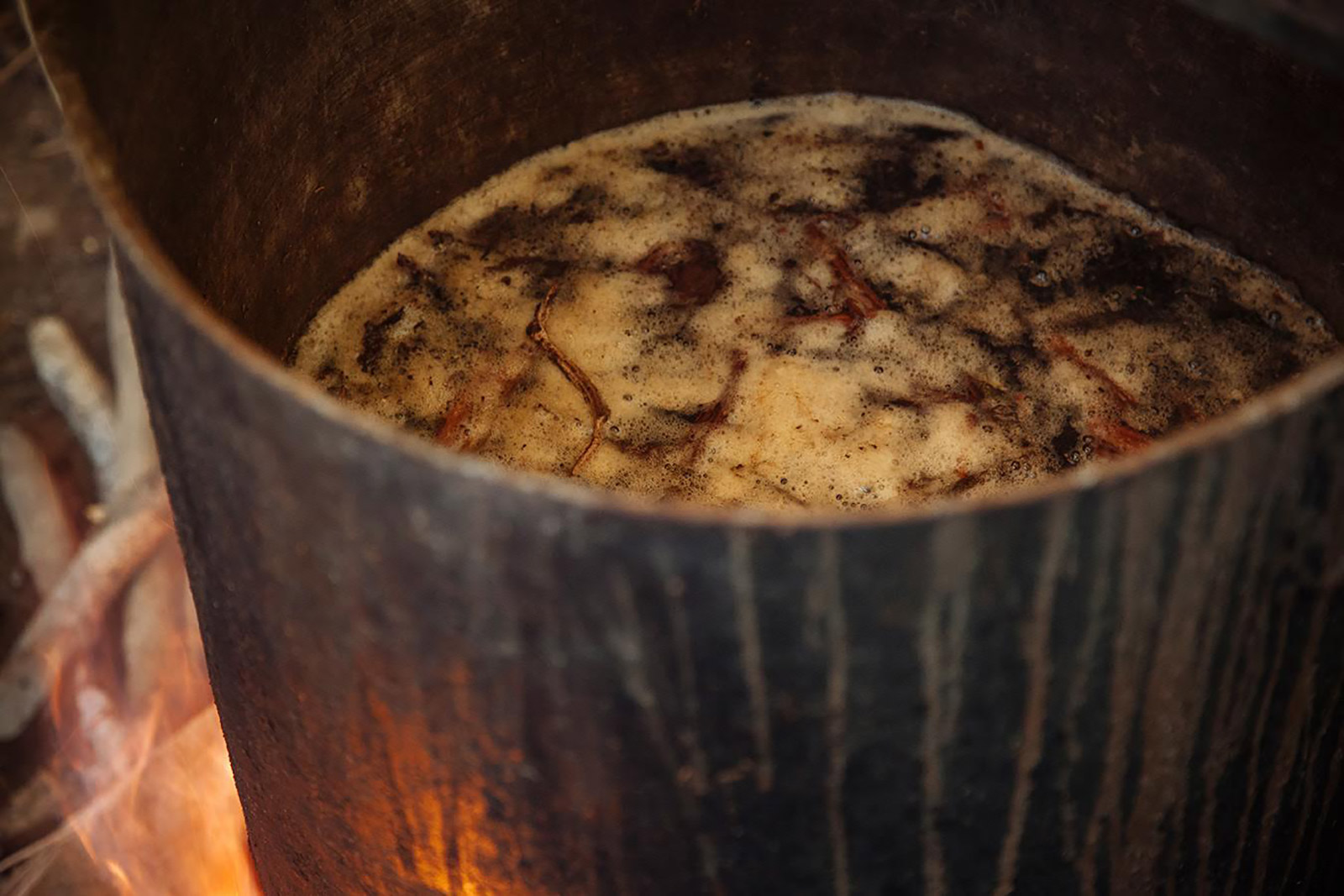 The ancient plant medicine of Yagé (ayahuasca) is prepared by shamans using water collected from streams and creeks. Yagé has been traditionally consumed by indigenous peoples of the Amazon – some say for hundreds or even thousands of years – as a means to bring forth healing, wisdom, and guidance for their communities.

“When our rivers become contaminated, the spirits are affected just like we are. The spirits of the river and the forest leave us, and everything else we have – in our territory and as a people – gets lost.” 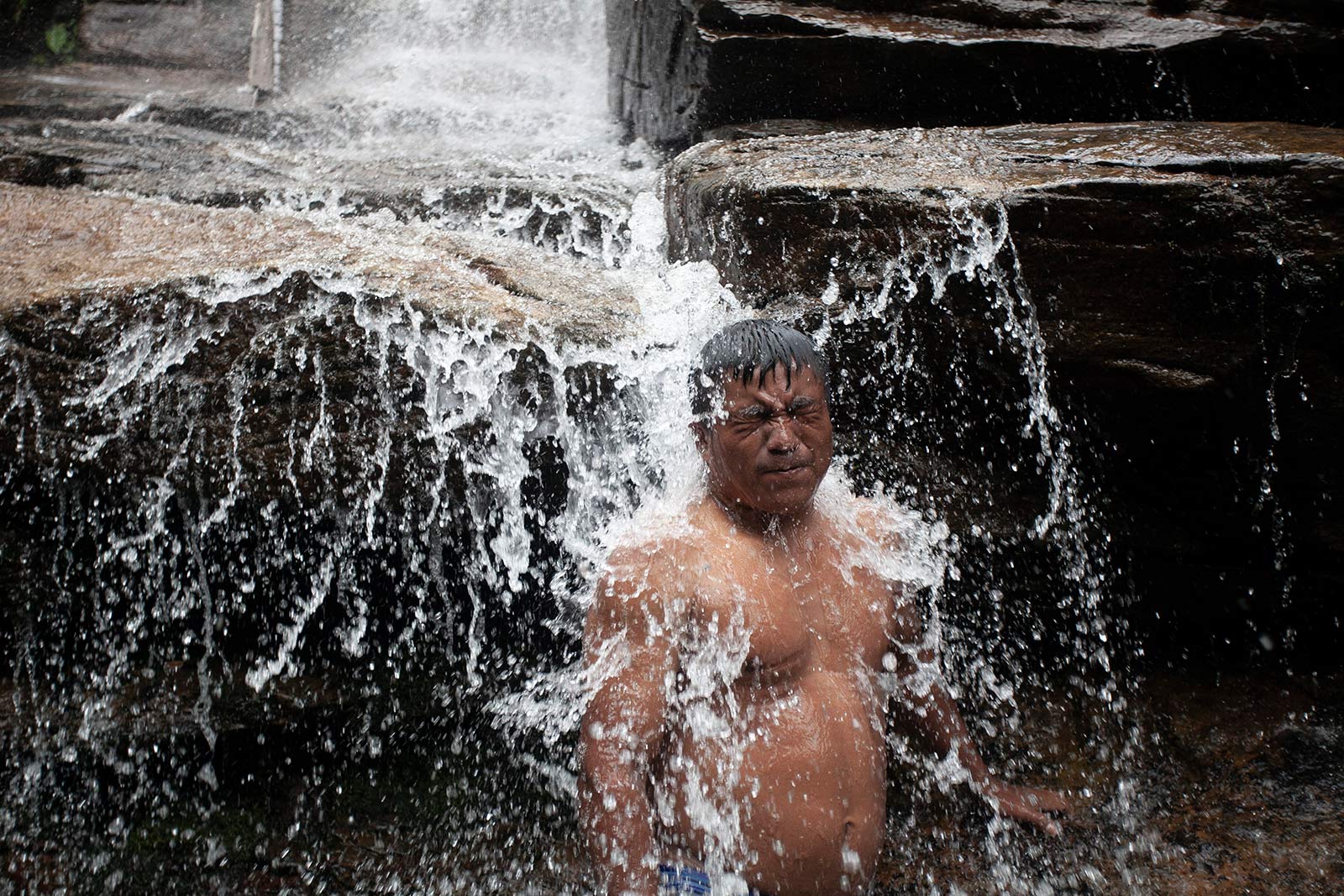 From waterfalls to streams and rivers, the Amazon has an abundance of water, which is used by indigenous peoples for their everyday activities such as bathing. 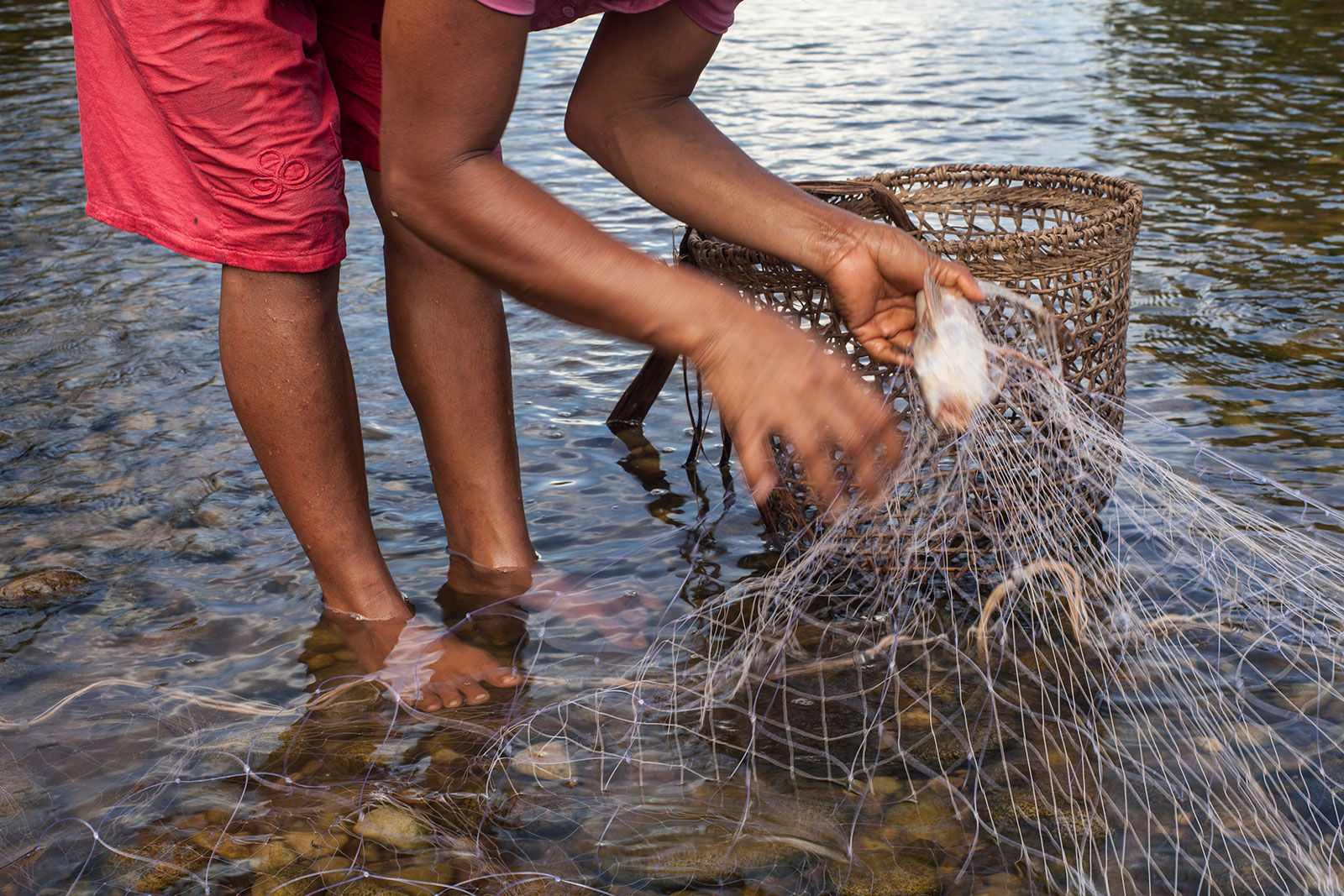 The Amazon river is a vital source of food for indigenous peoples of the Amazon. Indigenous people’s intricate knowledge of the complex web of aquatic life has allowed them to fish this bounty sustainably for millenia.

In Ecuador’s Amazon, oil company Texaco (now Chevron) began operations in the Amazon back in the 1960s and is responsible for one of the worst oil-related disasters in history, with catastrophic consequences for rivers and communities’ water sources in one of the most biodiverse places of our planet. 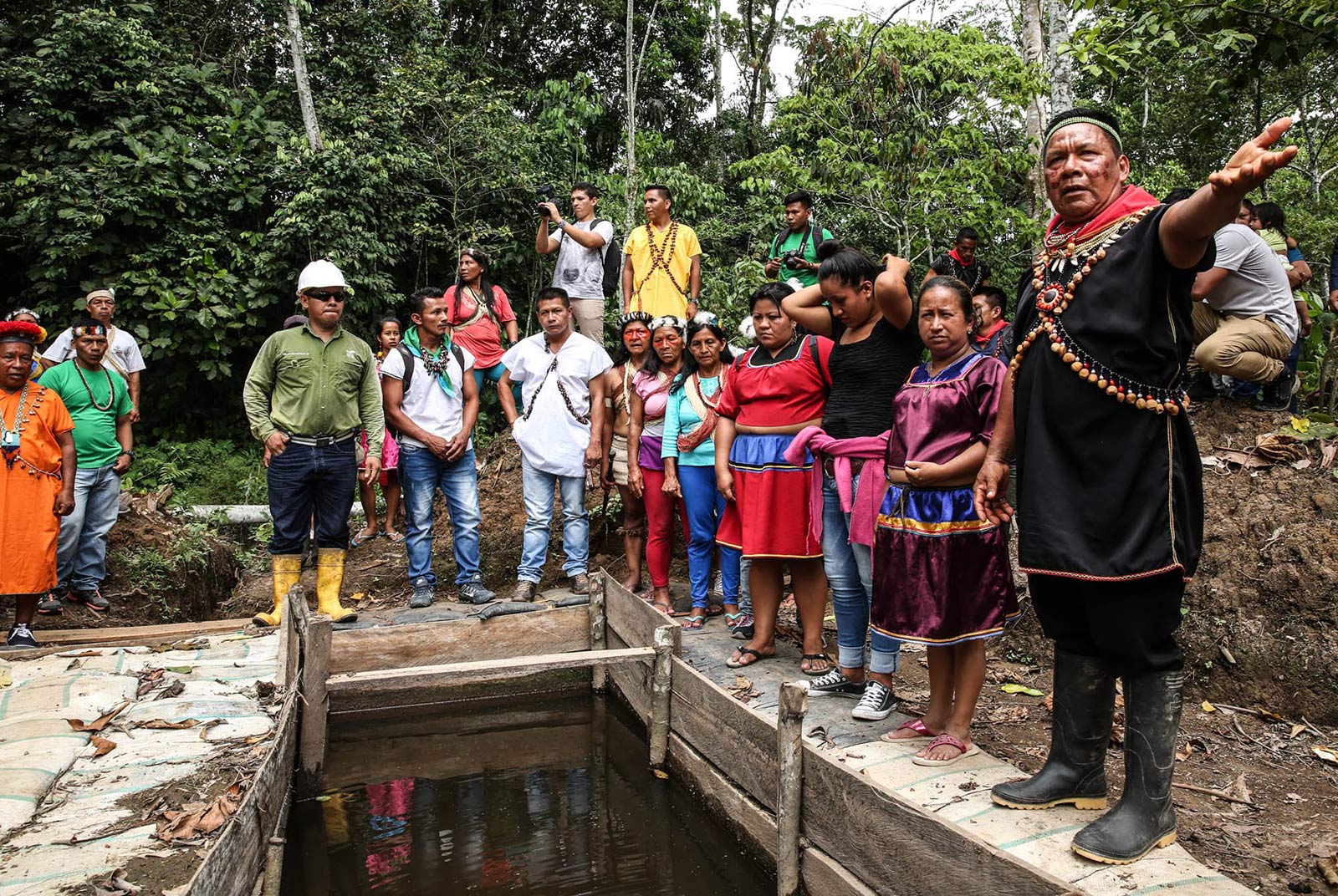 In the face of ongoing oil contamination, state abandon and impunity, indigenous communities of the Kofan, Siona, Siekopai and Waorani nations of the Ecuadorian Amazon unite to fight for clean water. Amazon Frontlines’ story and work, in partnership with our indigenous partner organization Ceibo Alliance, began here.

“These rainwater harvesting systems that will provide families with clean drinking water are the result of our hard work. We built these systems. We will take care of them. Together we can improve the quality of life for our own communities.” 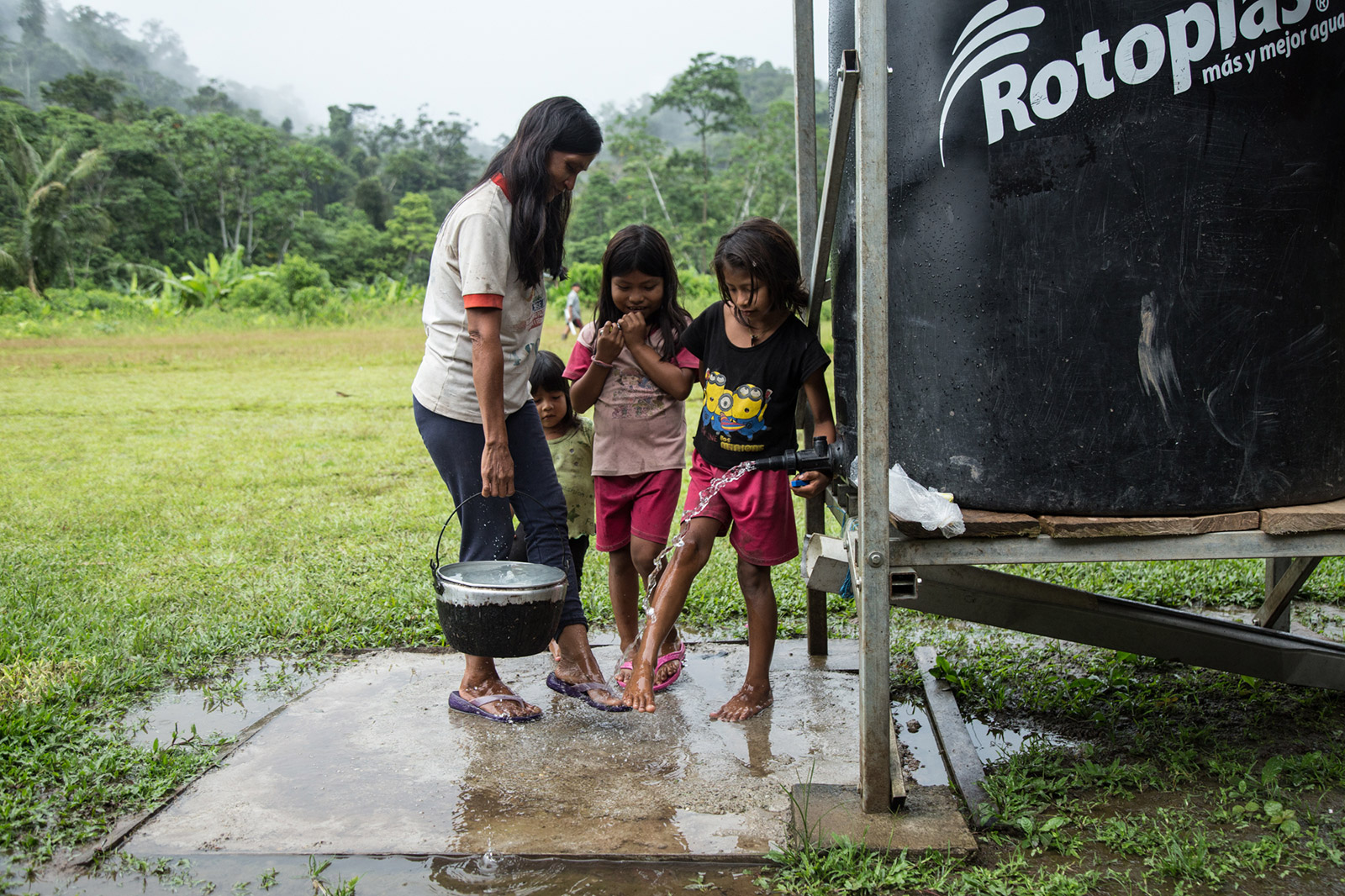 A woman and her children collect water from her home’s rainwater harvesting system in a Waorani community, Ecuadorian Amazon. 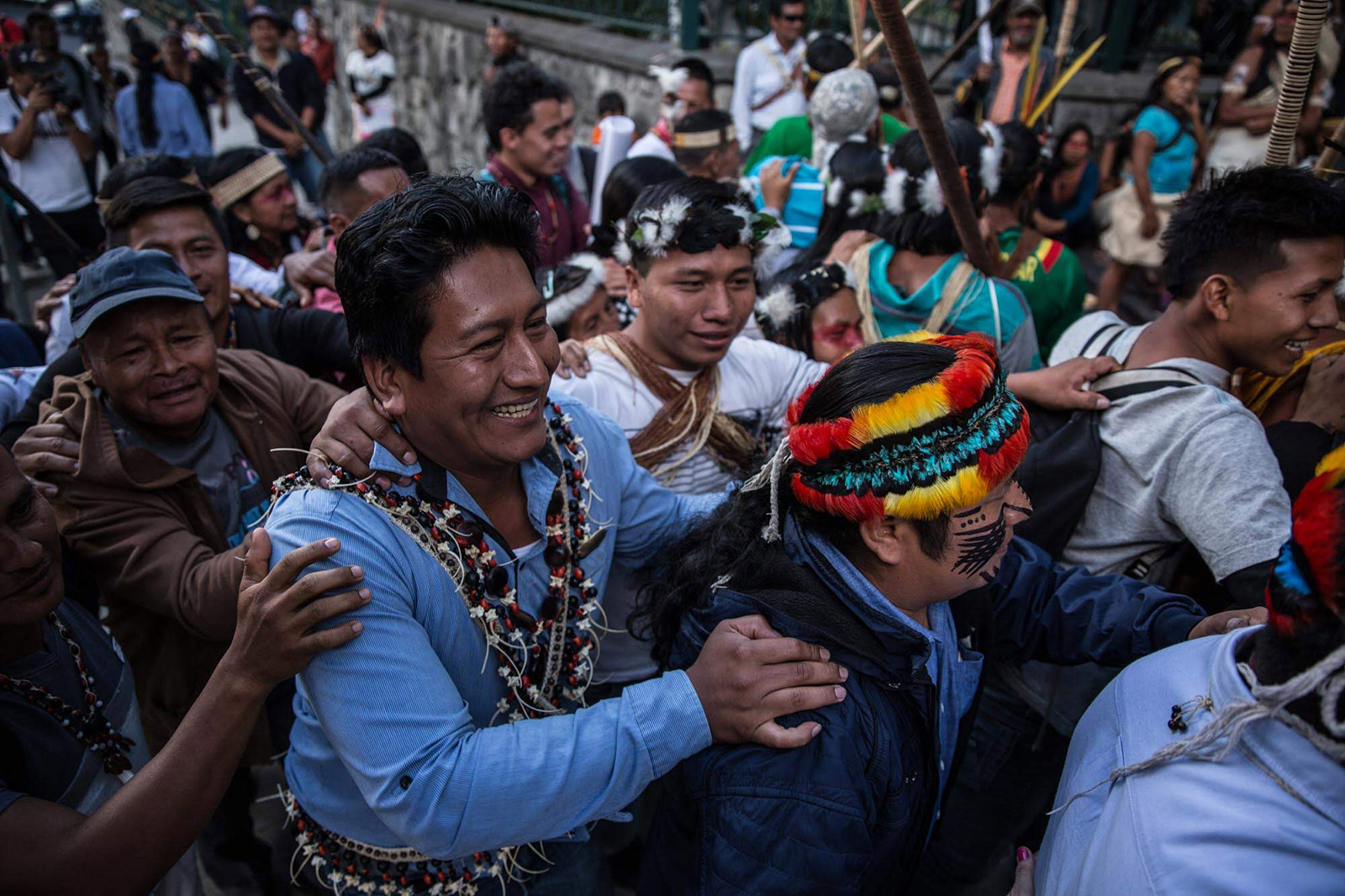 In a powerful moment for the Rights Of Nature, the Kichwa people of Santa Clara won an important legal victory last year protecting one of the Ecuadorian Amazon’s most beautiful rivers, the Piatua and halting the construction of a hydroelectric dam which threatened not only the river but also the Kichwa people’s way of life. 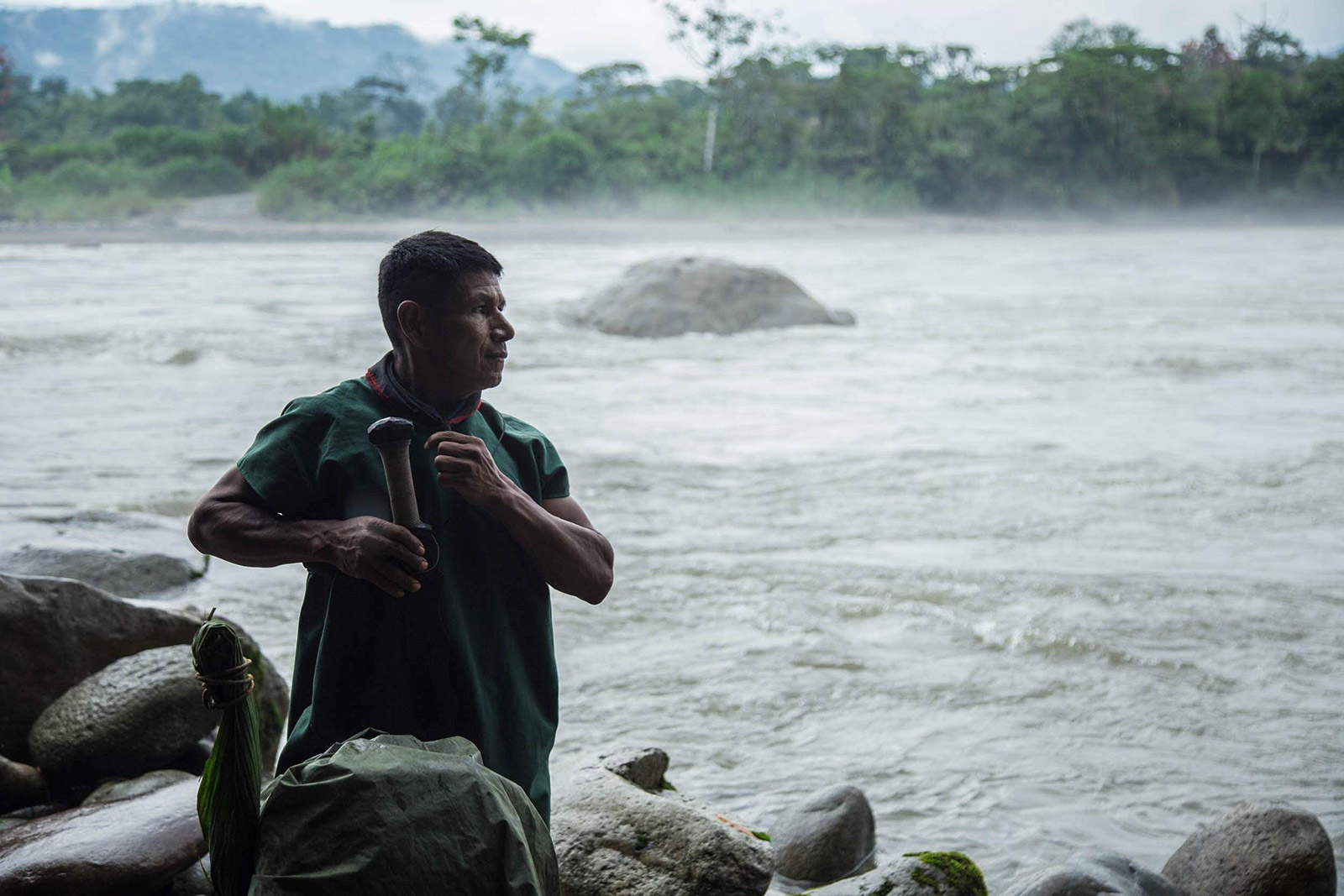 The Kofan people of Sinangoe in Ecuador’s Amazon won a historic legal battle against the Ecuadorian government in 2018, blocking a gold rush on their ancestral rainforest territory and protecting the Aguarico river. The ruling sets an important precedent for indigenous rights across the Amazon, as well as an important step forward for the rights of nature. 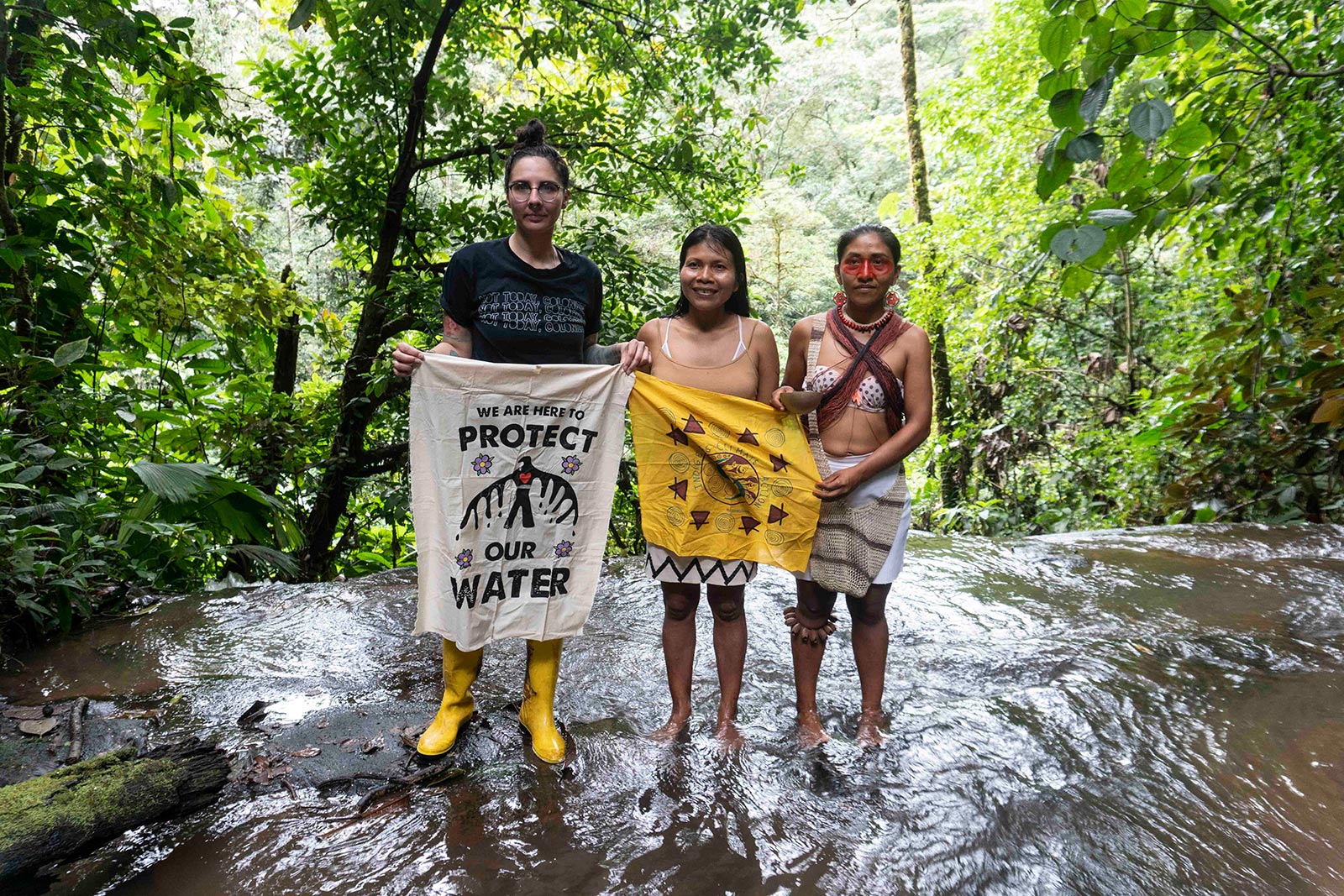 “We need to unite in the struggle because the fight is not only for indigenous people but for all of humanity. We have to sustain our planet. That is what we have to do: Unite to save our planet.” 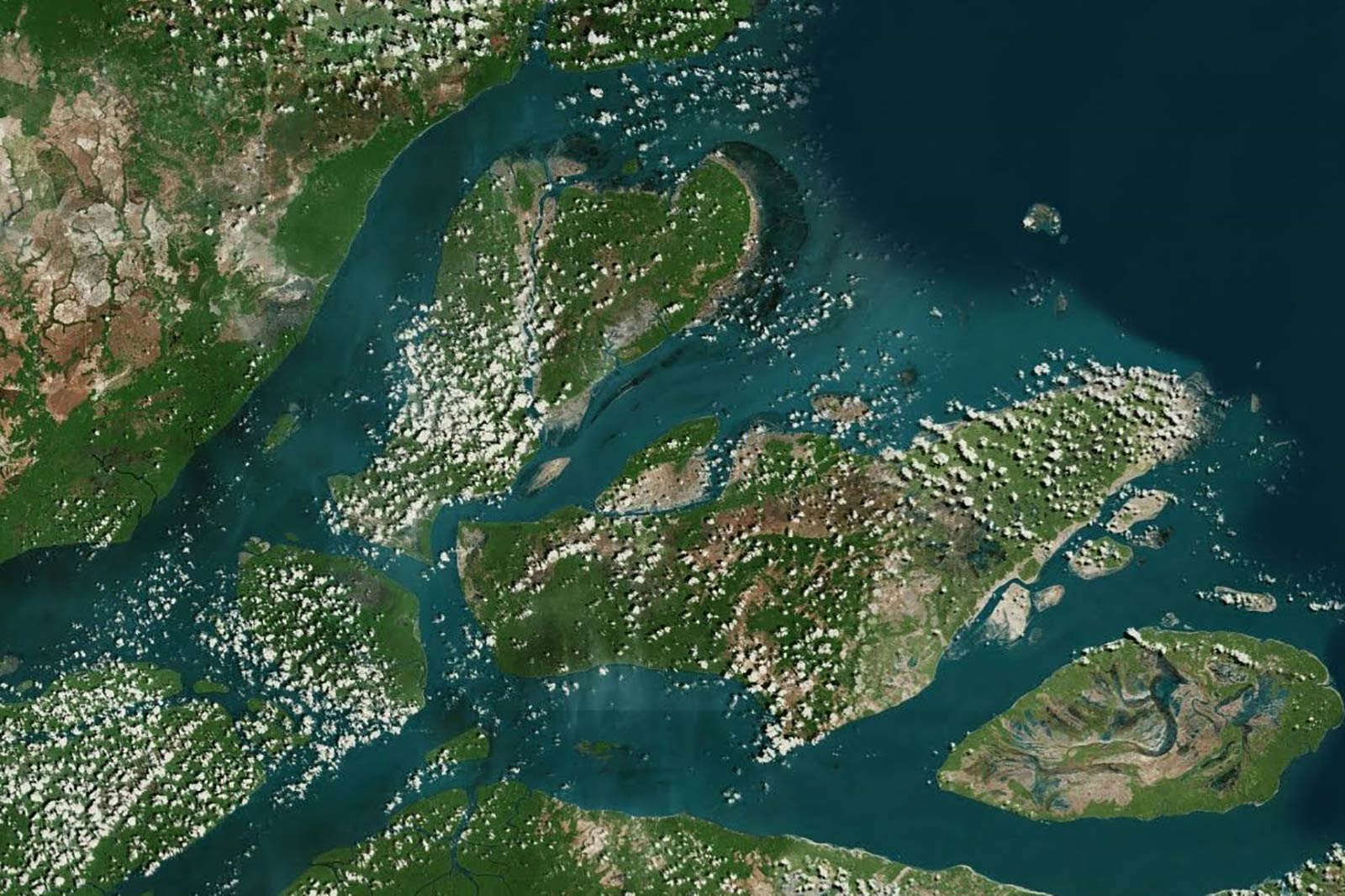