It came out of nowhere. No letters, no meetings, no publicity or any attempt to sell the idea, and from one day to the next, the game had entirely changed. With one approval from the Mining Ministry, what was once a pristine mega-diverse rainforest at the headwaters of one of the main watersheds of the Ecuadorian Amazon had been transformed into a gold mining hotspot. 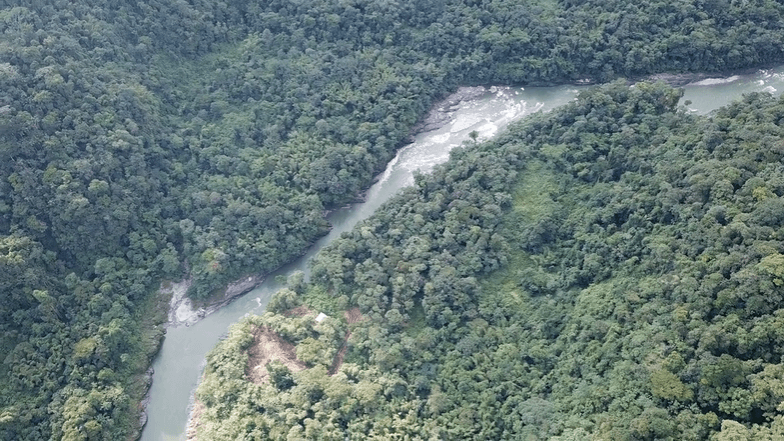 The headwaters of the Aguarico River, where the Cofanes and Chingual Rivers meet, have been licensed to gold miners. The fate of the area now lies in the hands of the Kofan people who are fighting to protect one of the last intact areas of their ancestral land.

Over the past three months, the Ecuadorian government has granted more than 10 new gold mining concessions in the headwaters of the Aguarico River, most within the boundaries of the Cayambe-Coca National Park and home to the ancestral Kofan people of Sinangoe. Despite its direct impact on the community, the rivers, the land and the A’I Kofan way of life, the new mining claims were granted without any prior consultation with Sinangoe, in violation of Ecuadorian law, and most probably without a proper environmental license.

To put it in other words, these operations are totally illegal.

The entire northern and north-eastern border of Sinangoe’s land and Cayambe-Coca National Park have been leased to gold mining interest within the past 3 months. The red areas are mining claims already conceded, the ones in green are still under revision.

A radical change of scale

As described in a previous chronicle, the community of Sinangoe has been monitoring and blocking illegal mining inside their land for years. These invasive activities had significantly dropped following a September 2017 announcement of the community’s Indigenous Law – prohibiting any extractive activities on their land – an encouraging sign for the community that had witnessed an increasing amount of colonos inside its land for years. However, this new wave of gold miners is nothing like what they have witnessed before. 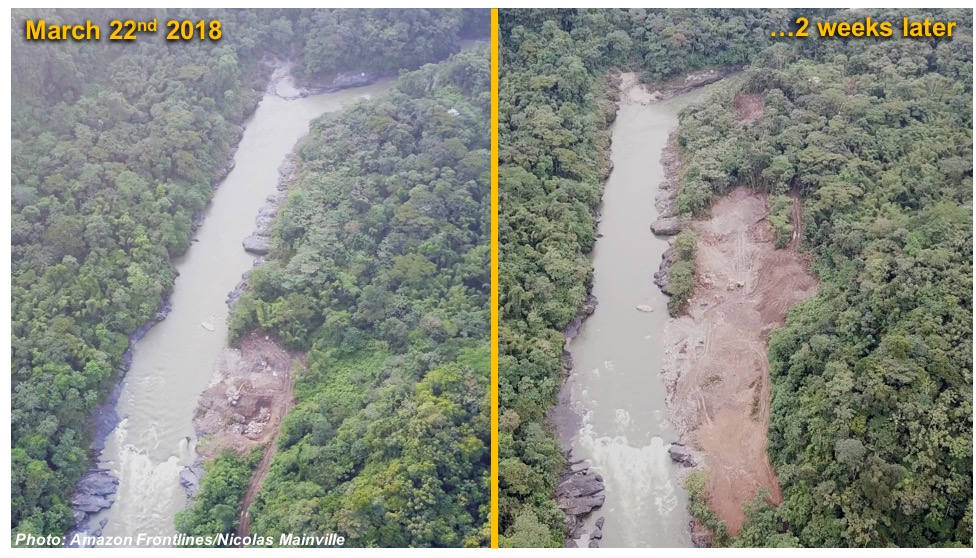 Over two weeks, a patch of pristine rainforest has been transformed into wasteland by gold mining operations. The fast pace has left the community of Sinangoe fearing the worst since these new concessions have been allocated to gold miners for the next 25 years.

Large machinery, huge water pumps, road construction, massive deforestation, noisy operations, gaggles of miners…this birth of a gold rush is a radical change of scale and quite worrisome, seeing how much damage they can do in such a short time. In recent weeks, Sinangoe’s land patrol has observed diggers and large water pumps outside the mining concession limits and inside the river bed, excavating and damaging the Aguarico River. One of the community’s main concerns is that these kinds of gold mining operations in the Amazon often come with the use of highly toxic mercury, a heavy metal that bioaccumulates in fish and can be extremely damaging to the human nervous system. 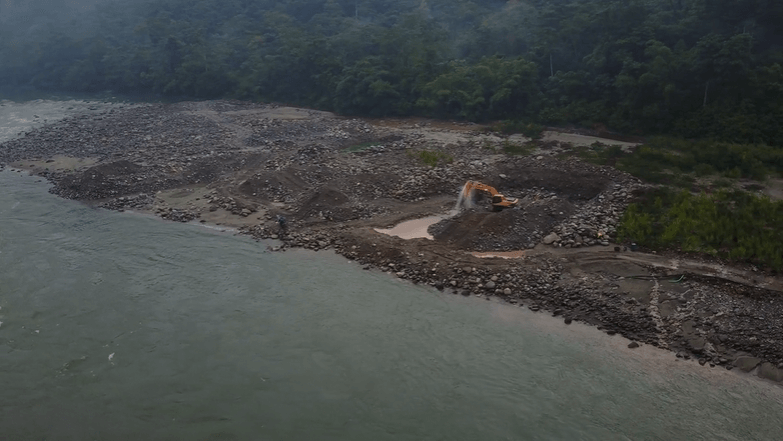 Sinangoe’s land patrol has witnessed gold miners with heavy machinery digging inside the river bed, and outside their new mining concession, an illegal procedure that hasn’t been met with any sanctions by the authorities so far.

Fueled with these new concerns, and with their struggle already attracting media attention at the international level, Sinangoe has increased its monitoring of the area and called upon the provincial and national Ecuadorian authorities to stop these operations. The Environment Ministry, the Mining Ministry, the National Prosecutor, the “Defensoría del Pueblo” and local governments have all been notified and called to action by Sinangoe.

To date, none of them appear to have taken any actions to stop these illegal activities, despite a recent referendum in Ecuador calling for a ban on any mining activities inside protected and sensitive areas. With mining being such a controversial topic in Ecuador, the country’s President Lenin Moreno announced the cancellation of 2,000 mining concessions in February, but we still don’t know if any of the concessions in the Aguarico are part of that list. 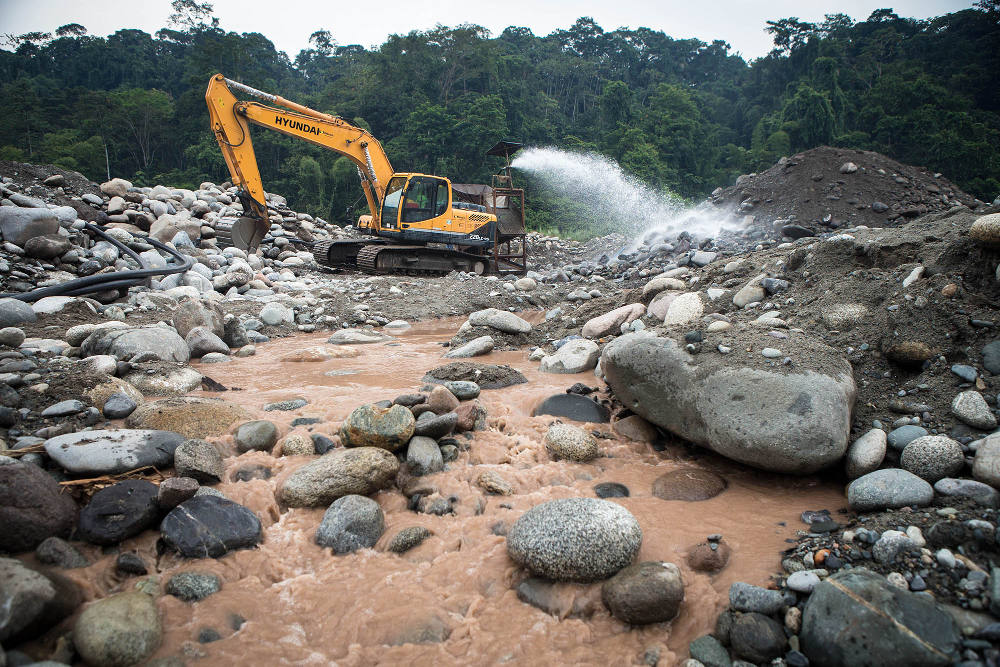 With new mining operations using heavy machinery, Sinangoe’s main concern is the high probability that miners use mercury to increase gold extraction, an illegal practice that would damage water and fish stocks and directly threaten the health of thousands of indigenous communities downstream.

On Monday April 16th, more than half of Sinangoe’s population joined a national protest against mining, calling upon the government to cancel all new mining concessions and stop all operations in the headwaters of the Aguarico River. 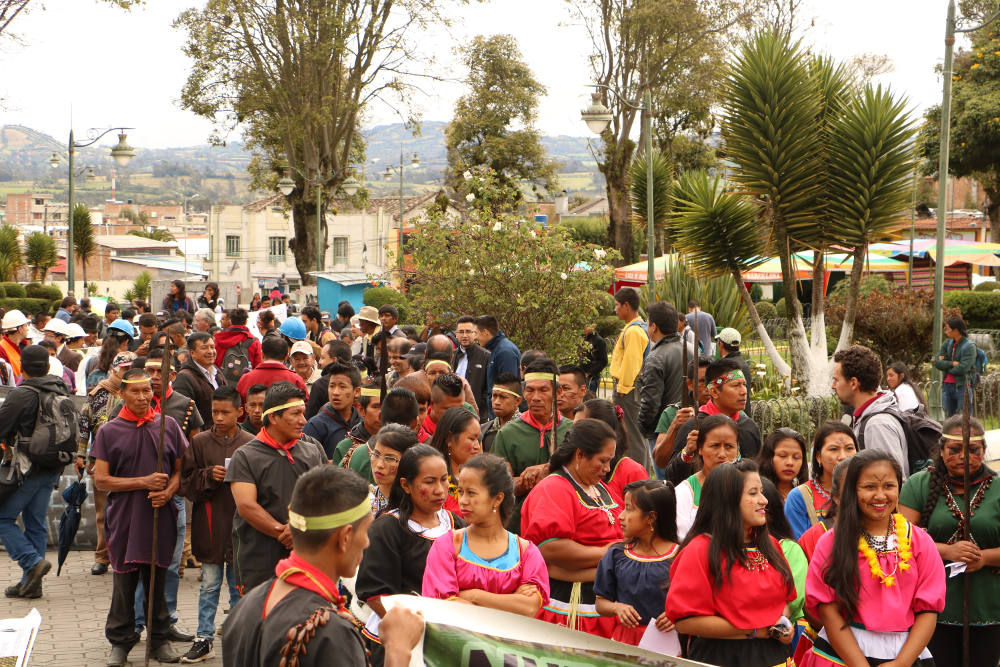 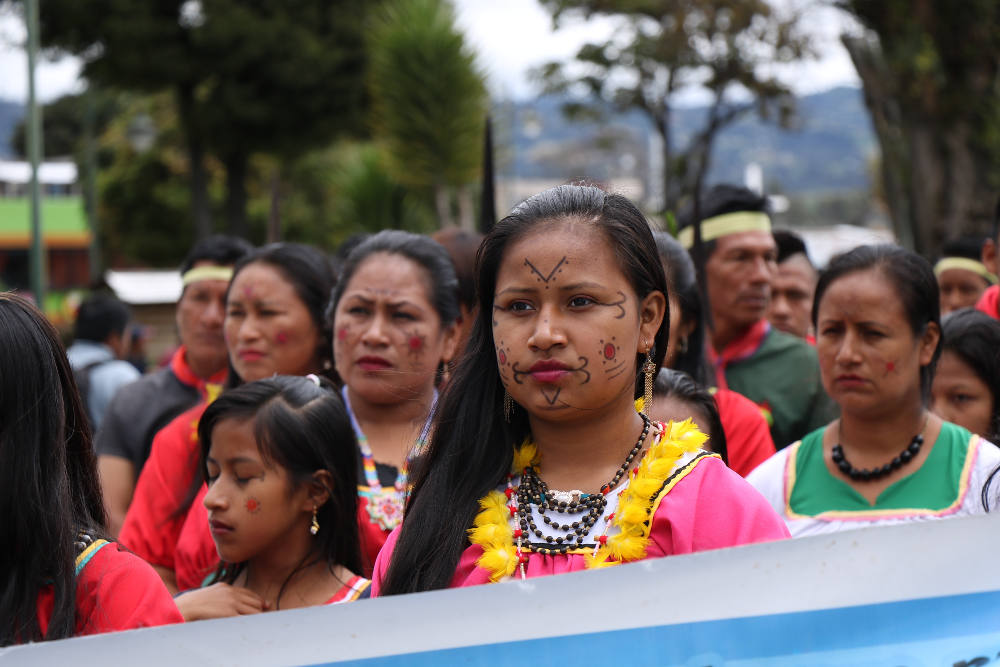 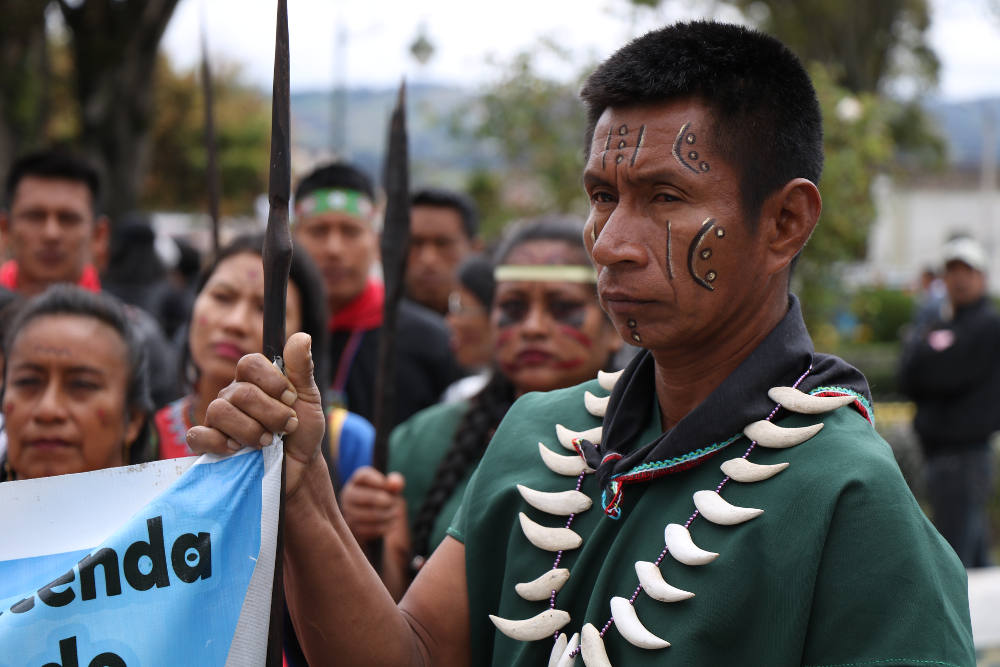 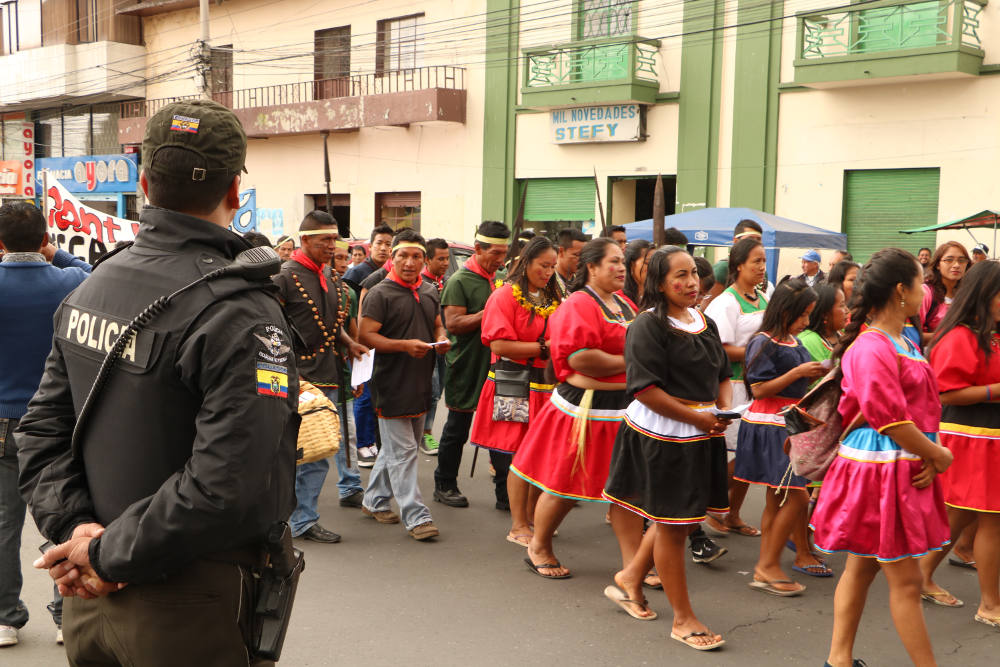 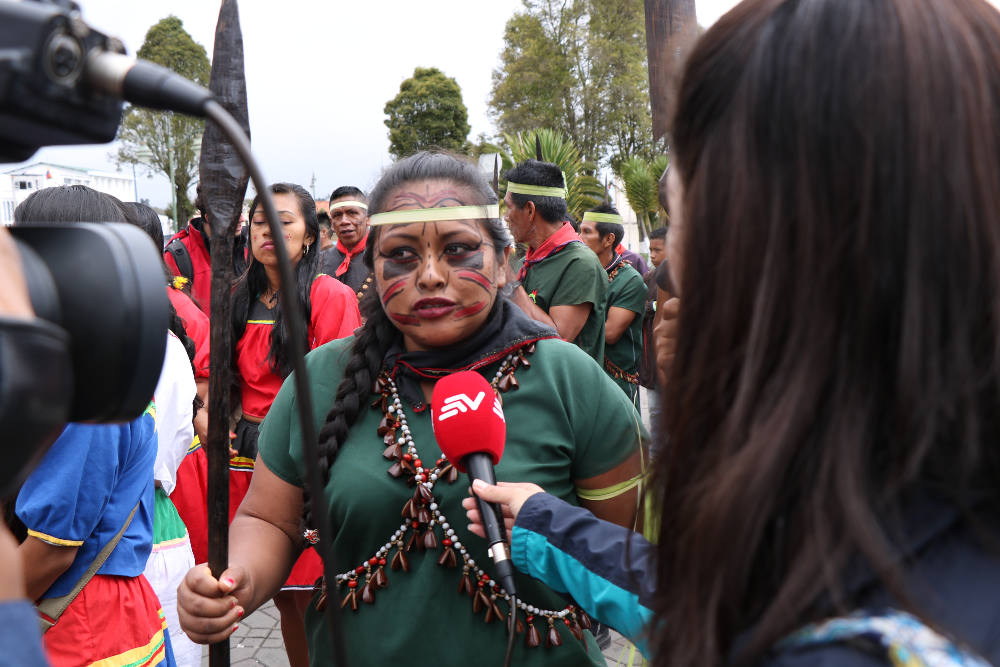 Members of the Kofan community of Sinangoe took to the streets of Tulcan, Ecuador, along with other communities affected by mining across northern Ecuador, to denounce a recent wave of mining concessions that threaten their health and their territories. Sinangoe and many indigenous communities across Ecuador are standing up against extractive industries that place a higher value on profits than indigenous lives and lands.

To succeed in nullifying these concessions, Sinangoe needs to increase pressure on the Ecuadorian authorities, and your support can make the difference to turn the tables and ensure that Sinangoe’s pristine ancestral rainforest stays intact. Stand with Sinangoe by signing the pledge and by sharing this information with family, friends and colleagues, and stay tuned for further updates and actions to support Sinangoe in their efforts to defend their ancestral homeland..