The “fluorescent” orange water coming out of the ground and flowing towards the pristine headwaters of the Aguarico River smells like a mix of sulfur and dead animals. The landscape has been ravaged, the jungle is gone, the ground has been turned inside-out, and the Provincial Prosecutor looking at the scene has trouble hiding his discomfort in front of such obvious evidence of illegal mining. This authority, the highest in the Northern Ecuadorian Amazon, is part of a delegation of the Environmental Police, the Ministry of Environment, the Ministry of Mining and the Ecuadorian Mining Regulation Agency who joined the Kofan land patrol of Sinangoe in a field visit where illegal miners had been wreaking havoc for 5 months already in this remote corner of the Amazon without being caught or sanctioned by authorities. 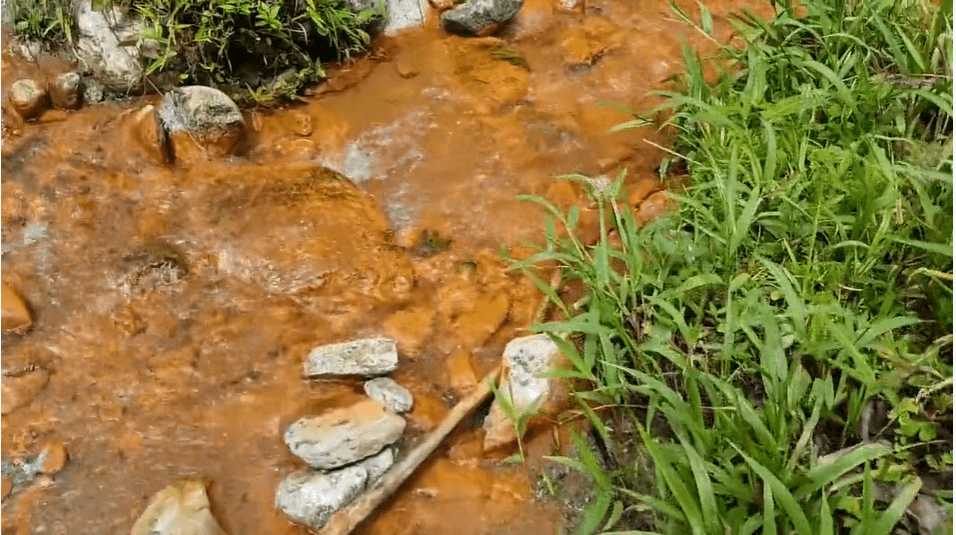 Alex Lucitante, a Kofan leader and human rights defender from the Ceibo Alliance, shows the Provincial Prosecutor and Ecuador’s Environmental Police a contaminated creek coming from illegal mining heading towards the Aguarico River.

After a quick boat ride against the Aguarico’s treacherous white waters, the delegation has come to a full stop on a site that only a week ago was teaming with goldminers, excavators and water pumps. Sinangoe’s land patrol, with the support of Amazon Frontlines and the Ceibo Alliance, have found out in recent months that more than 70% of the mining operations were conducted outside of the mining concession granted by the Mining Regulation Agency back in February 2018. While the authorities observe the scene, the Kofan land rangers point to the areas where the mining camps were located the last time they had come to do their weekly patrol, but this time, only garbage and a leftover fire camp could be seen.

Described in a previous blog as a new gold rush area, the headwaters of the Aguarico have been divided into more than 30 000 hectares of mining concessions without any free, prior and informed consent from the Kofan Nation or any of the impacted communities, triggering a vast movement of solidarity and support to Sinangoe by other affected indigenous Nations living downstream. On the site, signs of illegal use of chemicals are obvious where open pools have been left untouched, those holes a clue of gold mining likely utilizing cyanide on this very site the week before, giving the riverbank a disquieting look. Along with my Kofan colleagues, we quickly come to the conclusion that the miners in the area have fled a while back, taking their digging toys with them once the news of an environmental inspection had spread like wildfire in this gold-boom area at the foothill of the Andes. 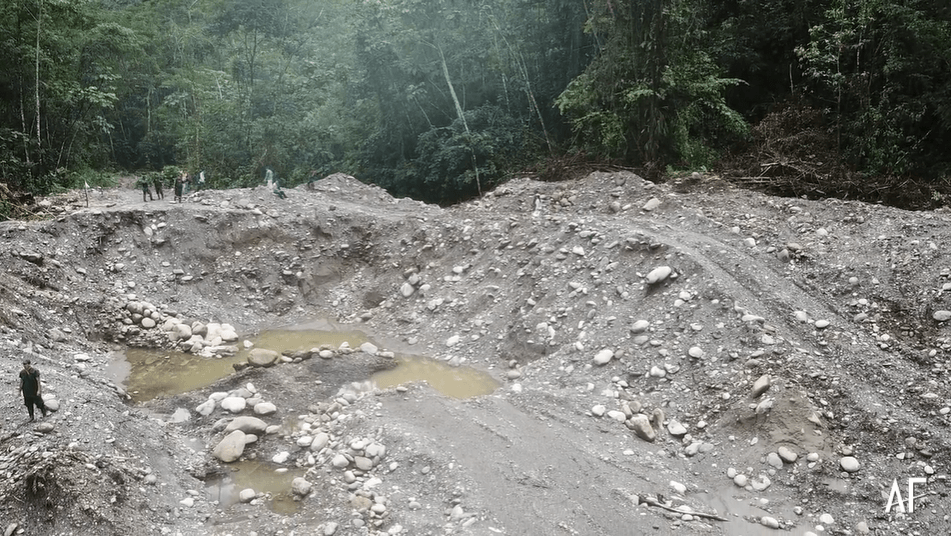 Open pools have been left untouched in an area that was teaming with miners a week before the visit. Authorities are seen inspecting one of the site on this drone clip.

Pulling the government by the ears

The reason why this group of more than 20 representatives from various ministries and agencies are roasting under the Amazonian sun is not just because multiple Ecuadorian and International laws have been violated. Nor is it because the water of thousands of people living downstream is under threat from these illegal activities. In fact, the only reason we are all there together looking at the disastrous footprint of this early gold rush is because the Kofan have stood up for their land, documented every move made by the illegal miners, and then pressured every single level of government to act to stop this environmental and human rights nightmare immediately. 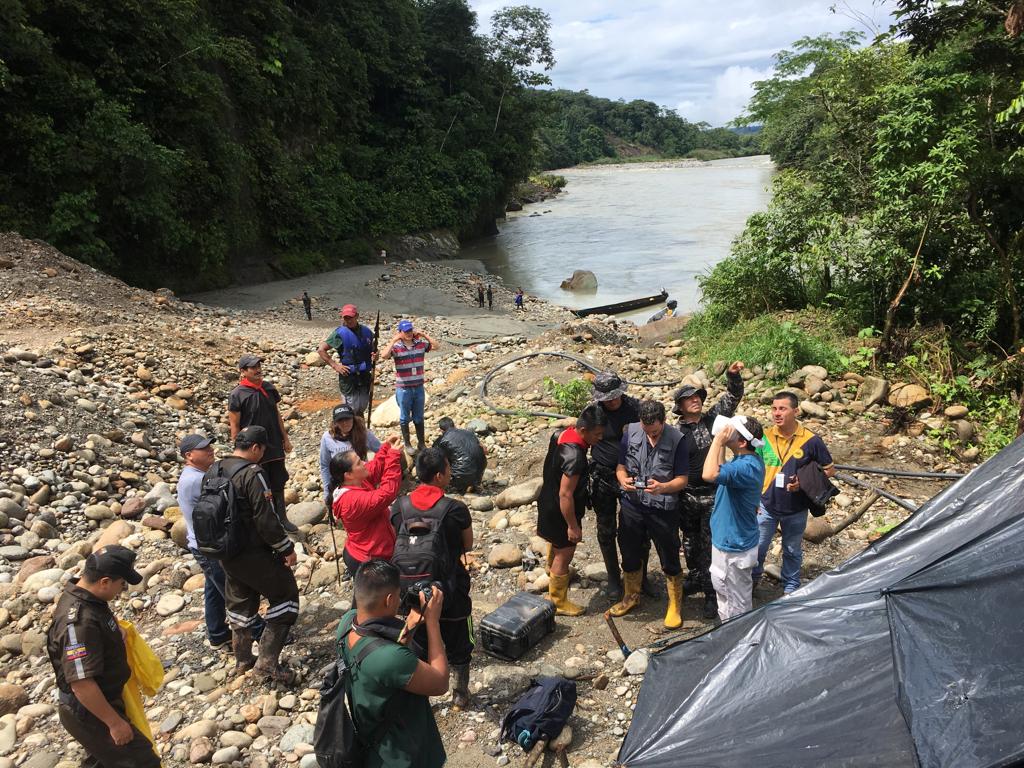 Flying the drone has allowed our team and the Kofan people of Sinangoe to detect and monitor the illegal miners in remote areas of the Ecuadorian Amazon. In this picture, the government authorities take a glimpse at the scene from the air through goggles.

With rigorous and systematic monitoring of every move from the miners – mapping, filming and documenting every step – the Kofan people of Sinangoe were able to demonstrate the illegality of the activities and force the Ecuadorian government to act, a first victory in a battle for the safeguard of their land. This comes after years of work for the Kofan who have decided to set in place their own indigenous law and their proper land patrol in order to detect, block and denounce any extractive activities inside their ancestral land. In the struggle to protect the Amazon, Sinangoe demonstrates the importance of indigenous-led land control in order to effectively avoid deforestation, forest degradation and poaching. Now that the authorities have finally seen the mess the Kofan have been denouncing for months, the community is waiting for action from the Prosecutor and the various ministries hoping they lead to canceling once and for all the dozens of mining concessions that have been granted in the area over the past months, and punishment for the mining companies that have operated against the law.

Damage is done, but the worst has been avoided

Over the course of 5 months of illegal mining, the trespassers have built a 2-kilometer road into pristine rainforest- opening Sinangoe’s ancestral land to more invasion. They have deforested over 15 hectares of forest, dug out countless pools, created landslides that have transformed the landscape, installed over 10 makeshift mining camps, modified the course of the Aguarico River, changed its color and turbidity and likely released a large amount of mercury and cyanide into the headwaters of this crucial Amazonian river. This neurotoxic heavy metal may cause health issues for dozens of riverine communities, contaminating the food chain for decades and accumulating into the fish those communities feed on every day. 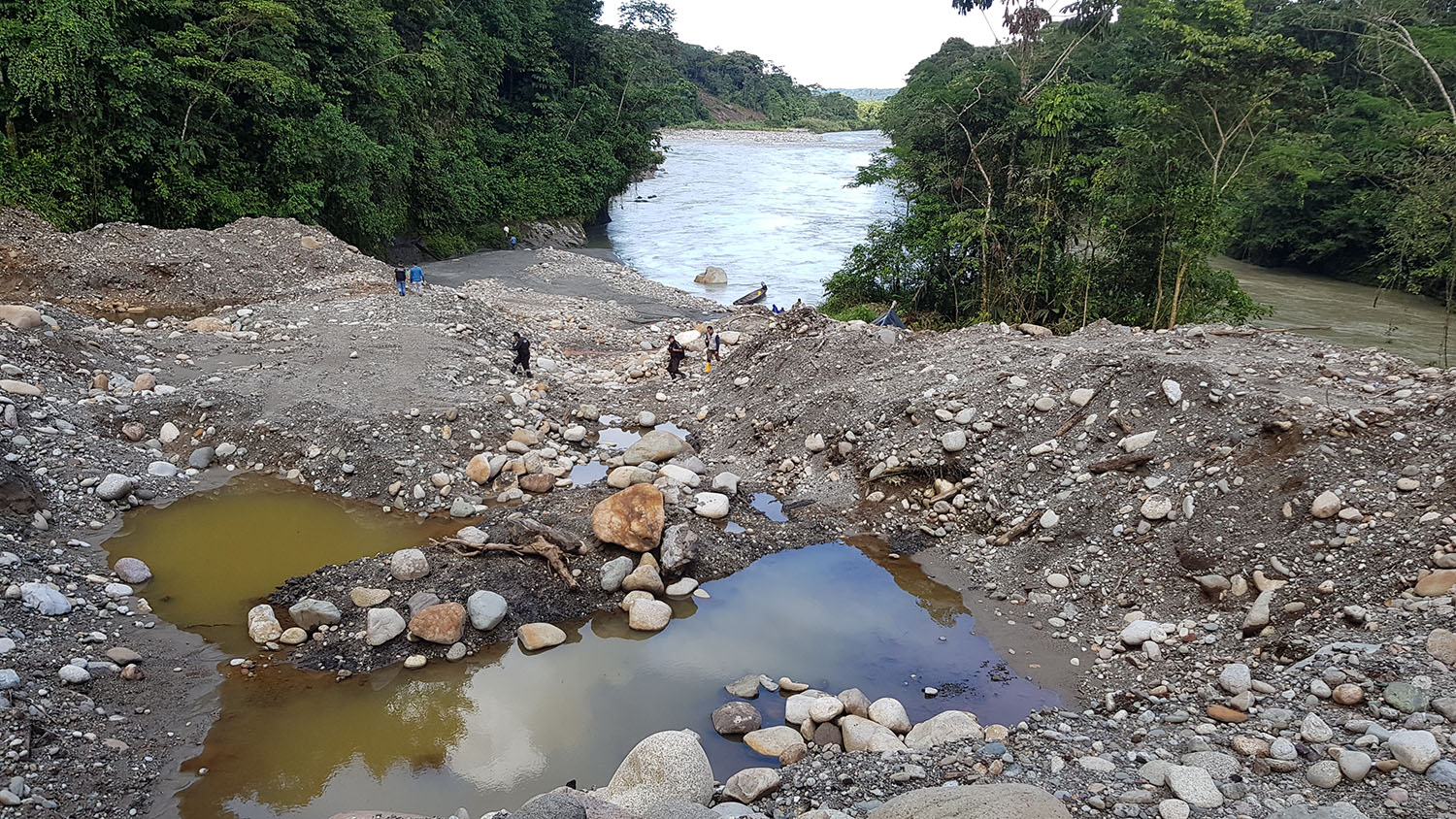 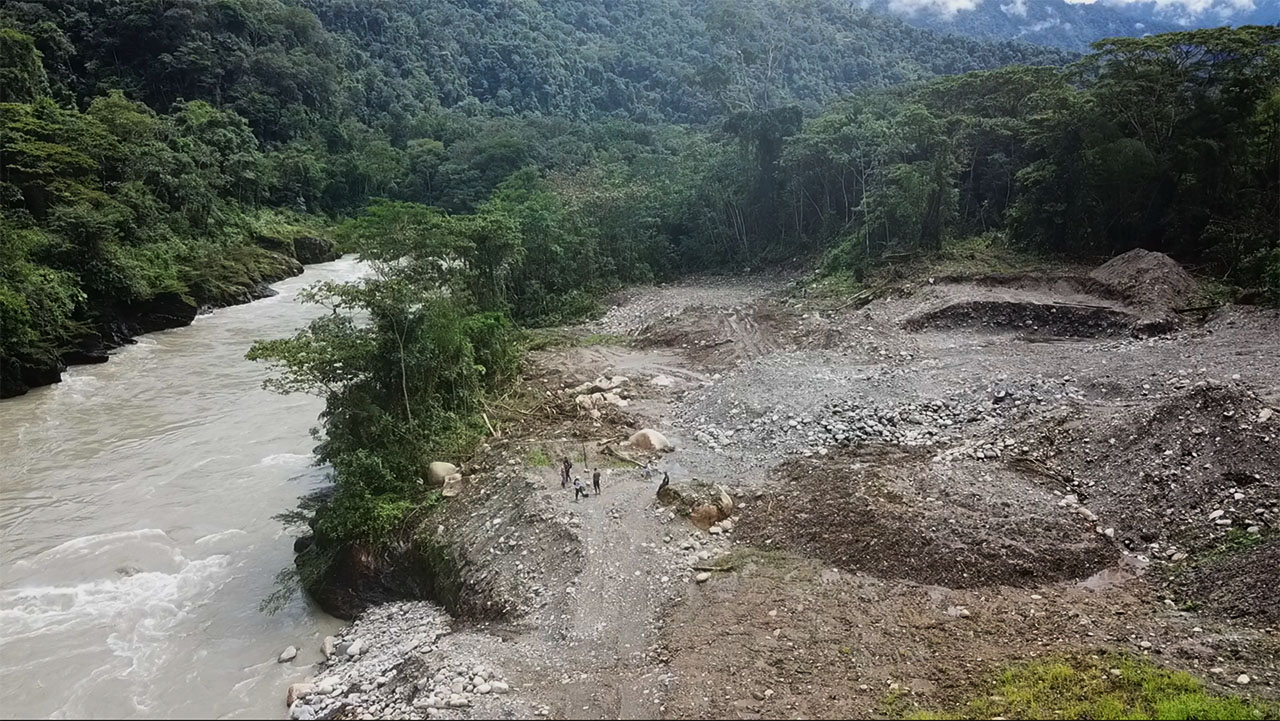 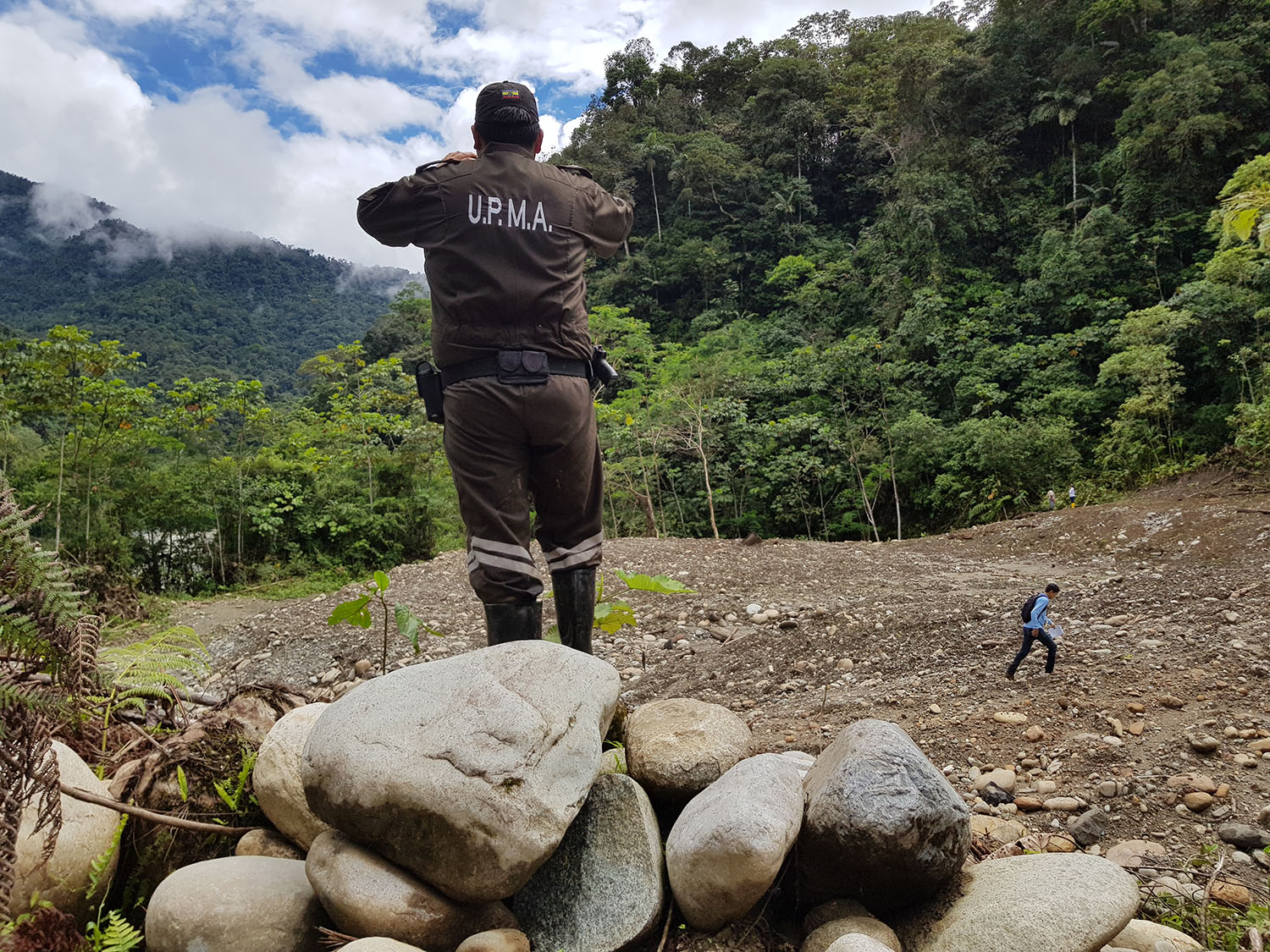 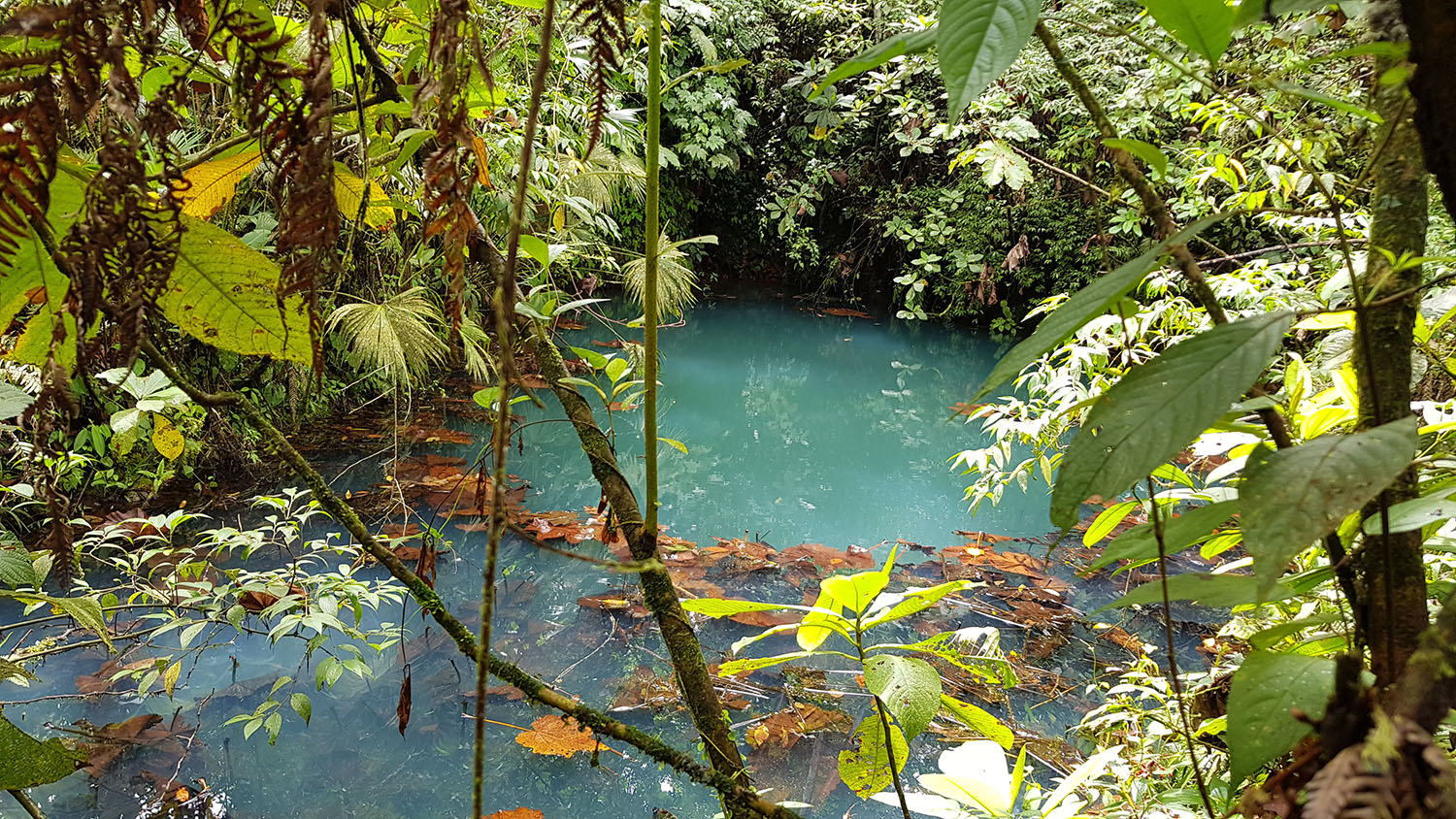 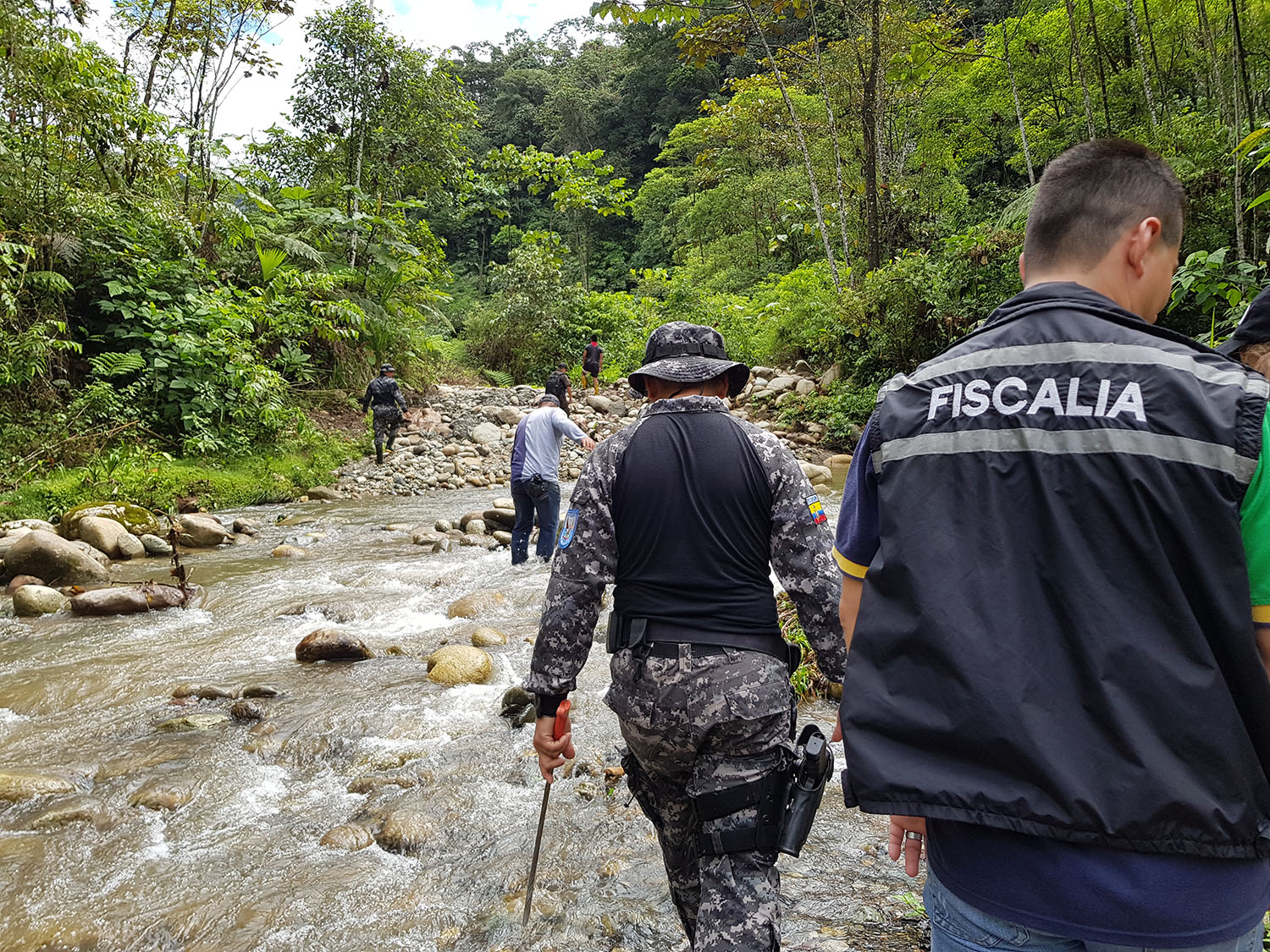 Digging for gold with heavy machinery in the Amazon takes a heavy toll on the environment and the health of its inhabitants.

Nefarious as these impacts are, the worst has thankfully been avoided. Knowing how bad illegal gold mining in the Amazon can get pushed us to work rigorously, hard and fast to avoid the worst-case scenario. Those ⁓30 000 hectares of mining concessions have been granted for the next 25 years inside and on the borders of ancestral Kofan lands in the headwaters of the Aguarico River, an environmental bomb if it is exploited. More than ever Sinangoe needs support in order to make sure these concessions are canceled, and environmental restoration begins so the land can heal. The community has been discussing possible legal action with Ecuador’s Defensoria del Pueblo- a public institution that defends citizens’ rights- and either with them or without them will be taking legal action to protect their territory, and halt mining in the area.

These are very positive signs which needs to be reinforced. Please stand with Sinangoe to pressure the Ecuadorian government to cancel these mining concessions and respect the community’s right to free, prior and informed consent on any development activities affecting their lands, lives, or culture. By signing the pledge to #StandwithSinangoe, it allows you to add your voice to the movement, provide direct support to Sinangoe and stay informed on future important steps to protect Sinangoe’s land and rights.