All along the Upper Aguarico River in ancestral Kofan lands, illegal gold mining is slowly transforming the landscape, forcing the community of Sinangoe to act to defend their territory.

The waves of the Upper Aguarico River are crashing on both sides of our boat, filling it with cold water rushing straight from the Andes, which stand tall in front of us. The puntero barks and points directions to the motorista in order to avoid smashing into one of the many boulders in our way, and my heart pumps fast with the adrenaline rush. My eyes feast on the wild landscape while my mind races: Where are they? Will we meet the same ones? How should we react if they become aggressive? 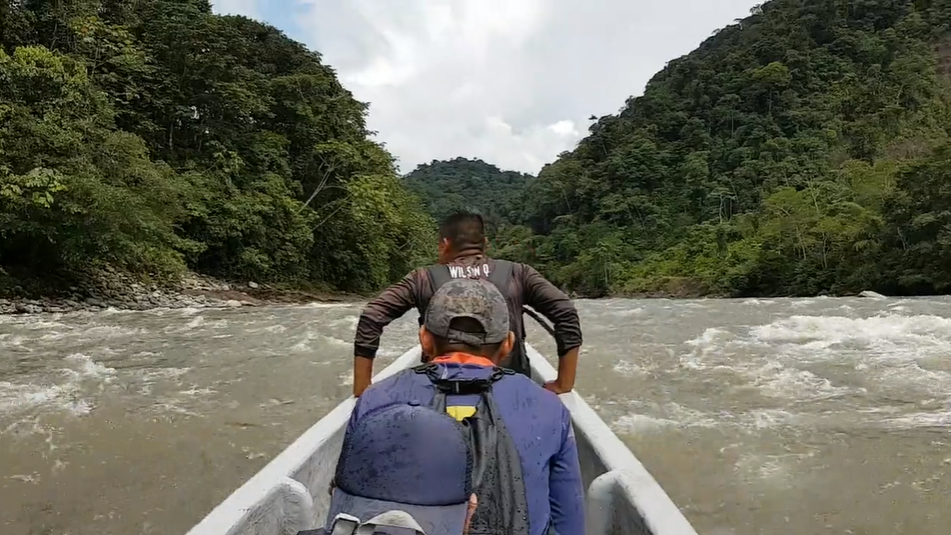 The land patrol of Sinangoe travels up the Aguarico River towards an area known to the Kofan people as a “hotspot” for illegal gold mining, hoping to stop what seems to have become an “Amazonian Gold Rush” on their ancestral land.

It is the fifth time in a little more than a month that our team has traveled to this far corner of the Amazon, in the mega-diverse foothills of the Ecuadorian Andes. This area has been the traditional Kofan territory of Sinangoe since time immemorial, more recently designated by the Ecuadorian government as the Cayambe-Coca National Park. If you close your eyes and think of the Amazon, Sinangoe represents everything you can imagine: rich indigenous culture, splendid wildlife, ancient lianas and giant trees, beautiful landscapes… And a lot of rain, falling in sporadic downpours and fueling hundreds of streams, waterfalls and rivers.

However, behind the luxuriant curtain of the jungle, hides a disconcerting reality: While the patch of green that represents the National Park might look nice on a map, illegal miners, fishermen and poachers are currently roaming inside Sinangoe’s land without consent from the community or any meaningful control from the government — and the Kofan people have had enough. Our team, composed of Sinangoe’s leaders and land defenders, is on the lookout.

We have reached the section of the river where boats can go no further, and are now walking on a trail that seems to be used every day by dozens of people. Footprints in the mud, an oddly broken branch, new trails leading deeper in the jungle, an empty shotgun cartridge, remnants of a makeshift camp, garbage left in a clearing… The signs of the “Amazon gold rush” are obvious, even for a foreigner like me. The Kofan people have been walking these woods for millennia, but rarely have they seen so many indications of the ongoing occupation of their land by the “cucamas”- the “outsiders.”

Facing increased pressure on their land, the Kofan people of Sinangoe have decided to work with the Ceibo Alliance and Amazon Frontlines in a monitoring project aimed at detecting, documenting and denouncing illegal activities in their traditional territory. Through the use of community land patrols, camera trap photos and videos, drone footage, satellite imagery and territorial mapping, the community is channeling reliable, evidence-based, real-time information about invaders to help decision-making processes in order to defend their ancestral land.

The team of Kofan land defenders from Sinangoe has been using camera traps, drones, GPS and video cameras to detect illegal activities on their ancestral land.

After walking for fifteen minutes, we reach the first camera trap, well hidden in the trees. Trepidation takes over our team. Since we installed the camera two weeks ago, it has been very active: The small lcd screen indicates that the memory card is filled with 168 pictures and videos. Triggered by movement and equipped with heat sensors, these camera traps are usually used to detect wildlife, but we have adapted our monitoring to detect another kind of species: homo illegalis- the illegal colonist invader. And it seems our first camera of the day will provide very valuable clues on the habits of this elusive species.

Settled on a big rock close to a stream, the team focuses on the laptop we downloaded the images onto, hoping the approaching rain clouds above don’t bring a quick end to our improvised forest desk. Flipping through the gallery, the faces of my Kofan colleagues change from excitement to awe to indignation. The pictures and videos show dozens of intruders on this very spot, walking in pairs or in groups of up to eight people, some with gasoline tanks, others with shotguns, shovels or pickaxes, all heading upriver at dawn and coming back down at dusk, sometimes two or three days after they first walked by. 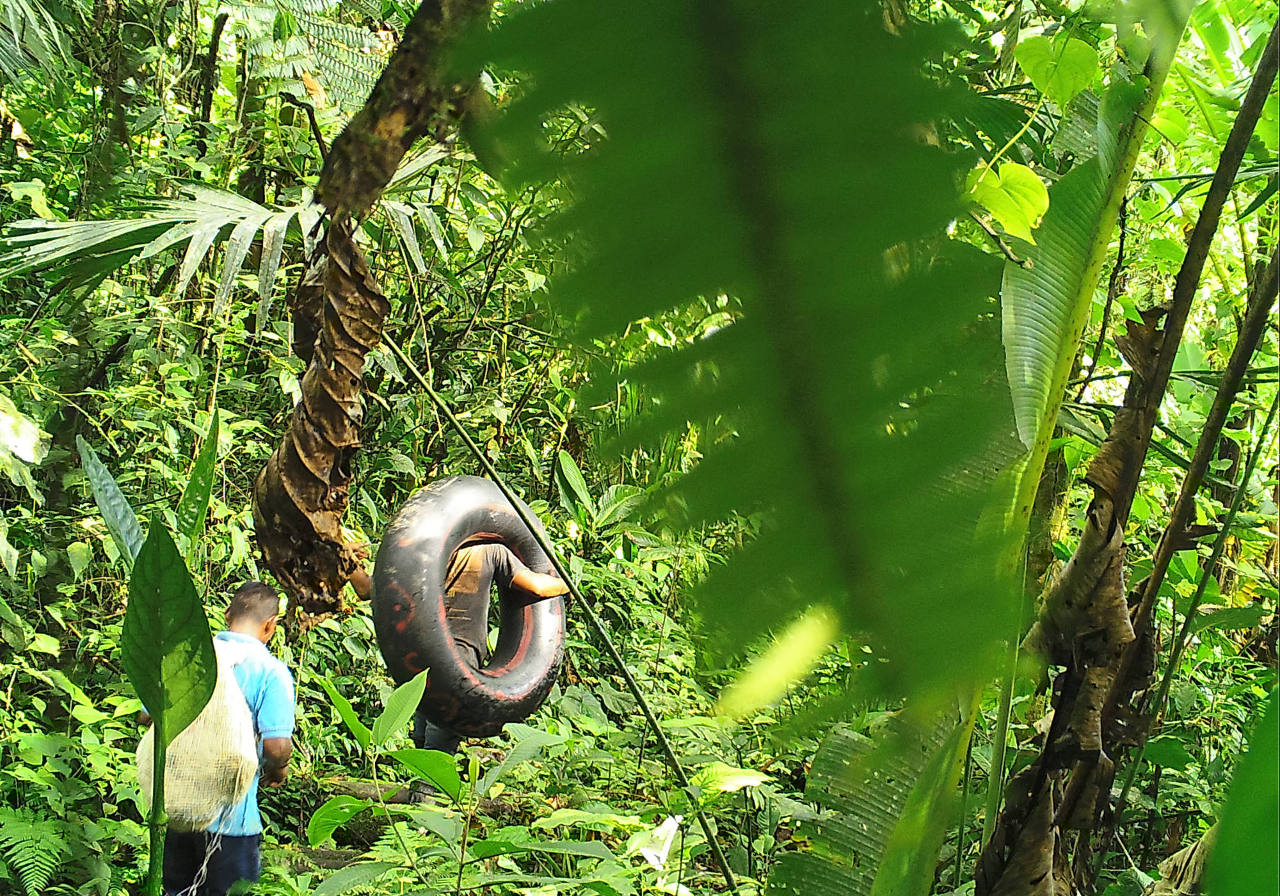 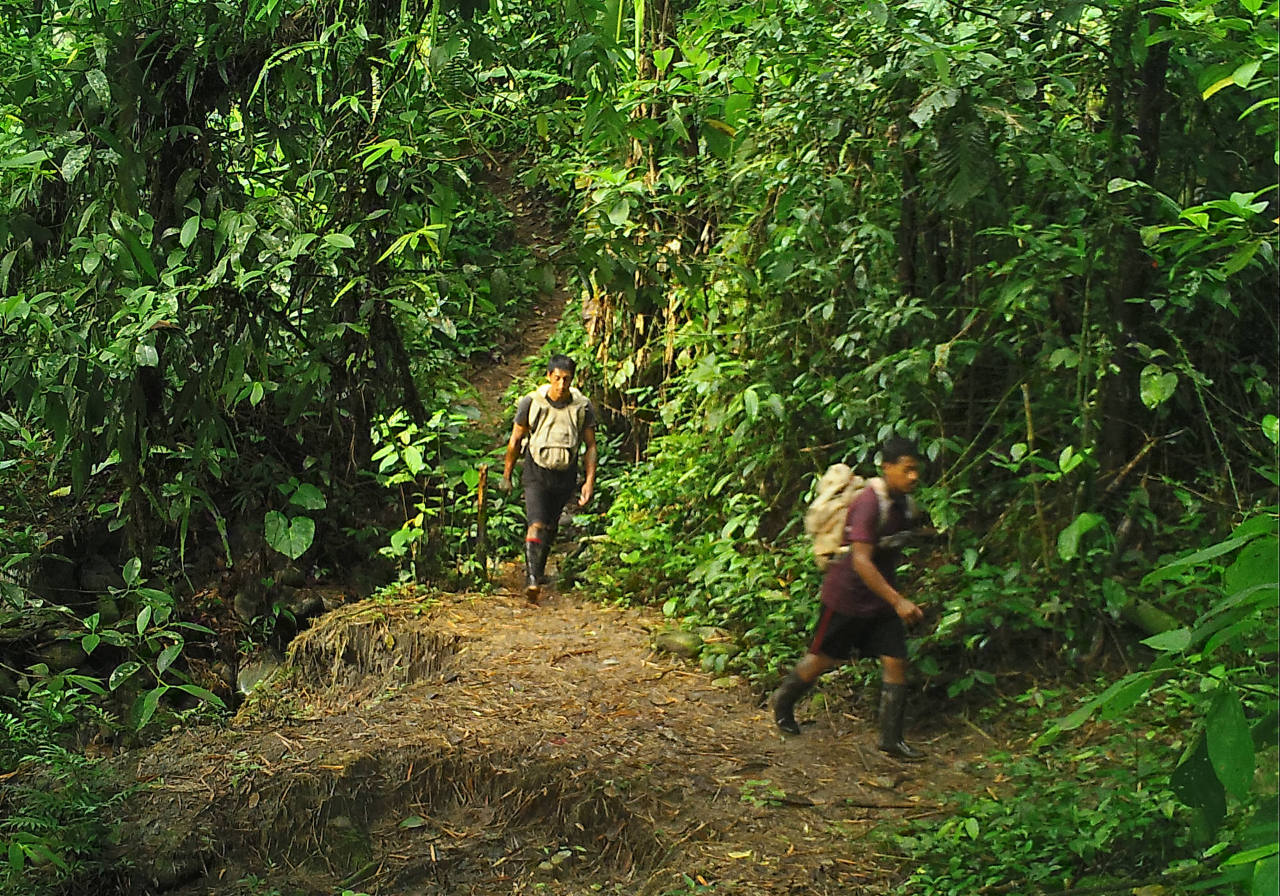 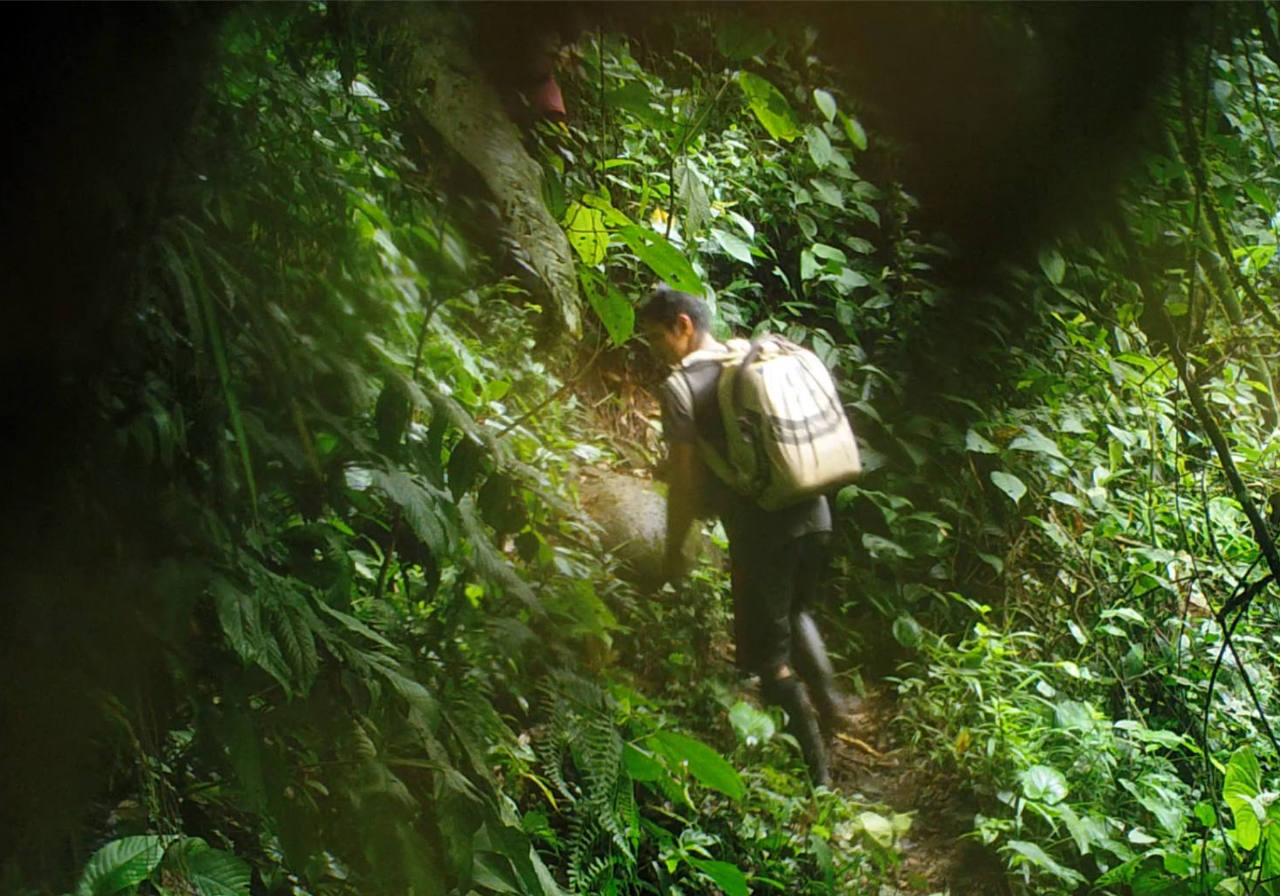 Over the course of less than four months of monitoring, from February to May 2017, the Kofan people of Sinangoe have detected more than 70 people, often working in groups, participating in illegal activities on their ancestral land.

We’re snacking on crackers as we look at the faces of the illegal miners and poachers on the screen while the elders of the group give us information as to who these people are. Some of them are well known colono neighbors of Sinangoe, but many faces are unknown to the team, a sign that things might be getting out of control. Moreover, some of the illegal miners that triggered our camera traps have been previously warned by our team many times yet continue to show up. It seems like the message still isn’t getting across.

When words don’t mean anything anymore

We are back on the trail, going upstream along the Upper Aguarico River, when someone in our group stops, pointing with his finger to his ear. We all stop and listen carefully. At first, I can hear nothing else other than the constant variety of jungle sounds- crickets, birds, cicadas and frogs. But after a while I catch it, behind the general din, a humming sound that can only be coming from one thing: a motor. We decide to go to the river bank, towards the sound.

One of our team members sees something move, about 500 meters from where we are standing. Instead of going right away to confront whomever it might be, we decide to fly the drone and get a peek of what is going on upstream. After a two-minute flight, the drone shows us the source of the noise. On a small stream leading to the main River, deep into Sinangoe’s ancestral land, three men are illicitly digging the pristine shore with a dredger in the hope of finding gold. Having visited this site two weeks earlier, we can see that they have transformed the landscape considerably. 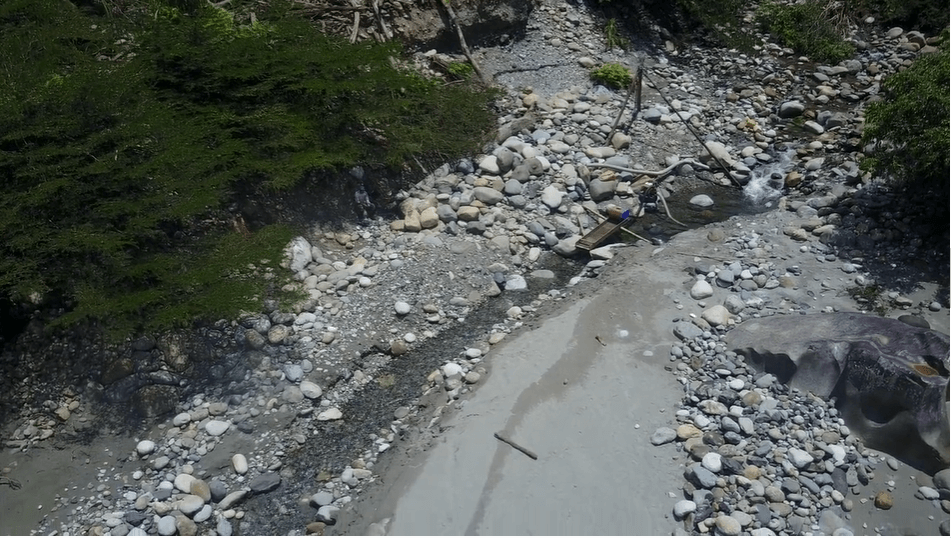 Caught by our drone hiding in the trees, a group of illegal miners are dredging a small catchment of the Upper Aguarico River, deep into ancestral Kofan land and inside the Cayambe-Coca National Park.

Even though we are filming from a considerable height, it seems the miners have heard the drone and hurry to hide in the trees. We bring the drone back to us, and decide to go straight to the men to have a talk. After a five-minute walk, we arrive at the dredger, which had been shut down, and realize the illegal miners are actually the same ones who told us a week-and-a-half ago that they never used machinery and would not come back to the area.

There is obvious discomfort in the air.

Sinangoe’s land patrol has warned dozens of illegal goldminers in the past months, asking them to respect their ancestral land and not exploit resources without their consent. In this exchange, a goldminer responds to the question “why are you coming to the very place the community says not to come, where the government says not to come and where you have no permit to do such mining?” The answer: “Let’s be honest, we are taking advantage of the situation… but give us one last chance and we will leave”.

From what we see, the men have been at work for many days. We can make out their makeshift camp in the trees, not far away. Once again, we all sit to have a talk — the Kofan always polite and calm; the miners, apologetic and defensive. Why are they coming back to the very place where the Kofan asked them not to come? Their answer is quite straightforward: “Let’s be honest, we are taking advantage of the situation… But give us one last chance and we will leave”.

The problem is, this conversation sounds like a broken record, and everyone in the group knows it.

Fed up with these kinds of encounters and of so many other abuses over the years, and the total lack of support from Ecuadorian authorities, the community of Sinangoe decided in May 2017 to adopt its own indigenous law and to put in place a formal land patrol to monitor and stop illegal activities on their land. Made public in September 2017, this new legal tool, supported by Ecuadorian Constitution and international treaties, prohibits any mining, poaching, fishing or logging by non-Kofan people on their land and sets strict rules on how invaders should be treated. 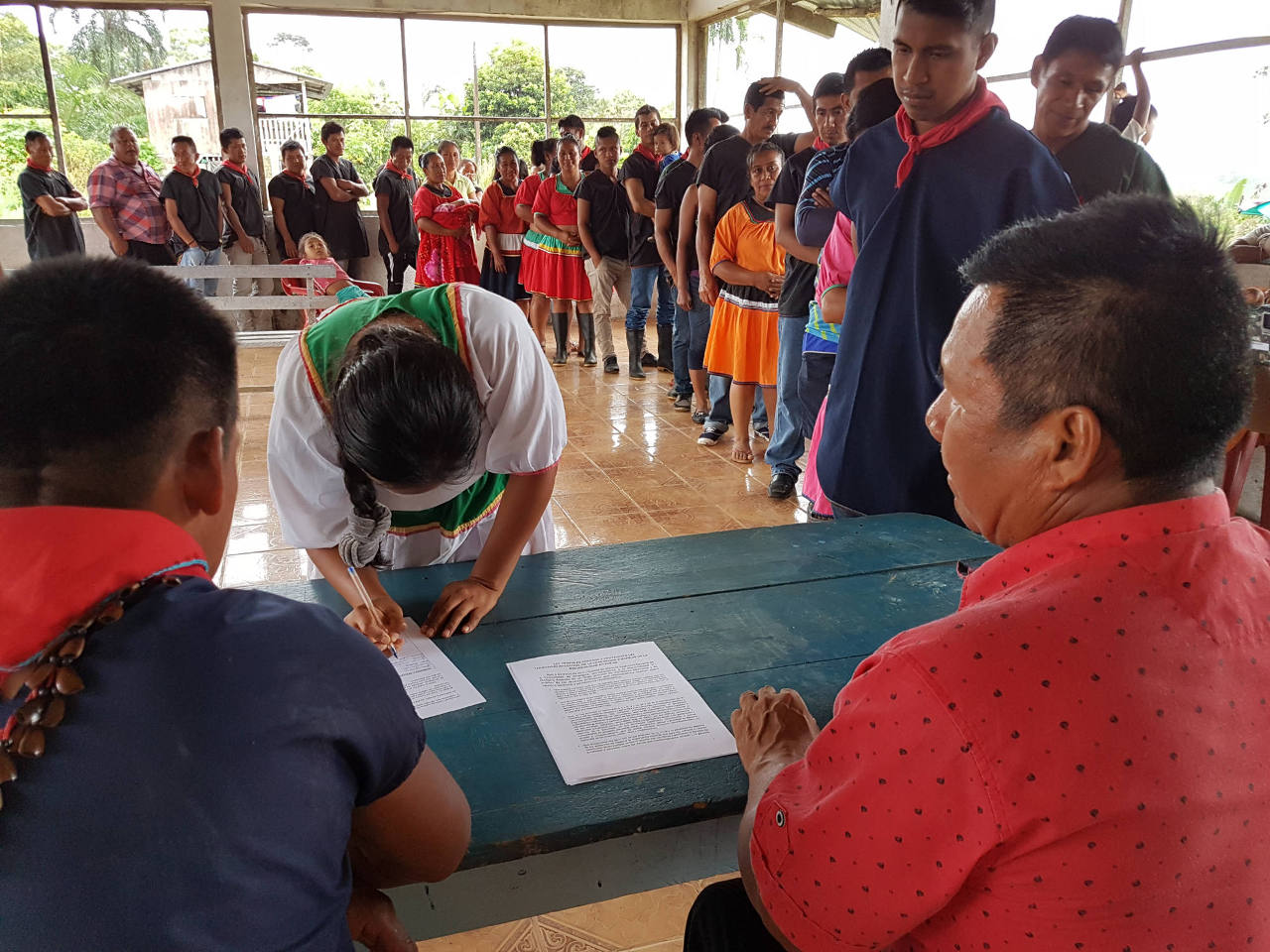 The entire community of Sinangoe have unanimously adopted its indigenous law in May 2017 in order to stop illegal activities inside their ancestral land.

As a direct response to these legal strides and the publicity it attracted, the local, provincial and national authorities have been forced to react, starting investigations and going with Sinangoe’s land patrol on the field to witness the illegal activities with their own eyes. Unfortunately, to this date, not one authority – either from the Ministry of the Environment, the “Defensoria del Pueblo” or the local or National Police – have acted against any of the invaders or set any sanctions.

However, illegal miners have since had to think twice before crossing into Sinangoe’s land, and the community has observed a drastic drop in invasive activities since they publicized their law in September 2017. Meanwhile, the land patrol keeps on walking their woods, constantly on the lookout for any infringement on their ancestral land.

In the early months of 2018, Sinangoe’s land patrol have found what they have feared for years: it seems like the reputation of the area as a good “gold spot” has reached bigger players’ ears. From one day to the next, big machinery has appeared on the very edge of their land, new mining concessions have been granted without any prior consultation. Definitely, this fight is far from over…

For the Kofan of Sinangoe, standing up in defense of their territory requires courage and it requires solidarity. Stand with Sinangoe by signing and sharing our pledge.