15 June 2021, Quito – This morning, Ecuador’s Alliance for Human Rights delivered a hard-hitting new report to government authorities and the Ombudsman’s Office on the critical situation of rights defenders in the country. The report, entitled “Rights Defenders Under Threat in Ecuador: How Government Protection is Insufficient and Favors Industry Interests,” reveals the intensifying dangers that rights defenders face as part of their struggles to protect and defend their territories, autonomy, and identity, and puts the spotlight on state and industry complicity to undermine their vital work.

The report, published by a coalition of nineteen human rights organizations in Ecuador, maps systematic rights violations against rights defenders including intimidation, threats, harassment, prosecution, persecution, and even assasinations, committed principally by the armed forces, national police, and public officials. Through the documentation of twenty-two emblematic cases from the Amazon to the Andes and the coast, the report exposes the experience of  449 rights defenders over the last decade. Three assassinations linked to the mining sector notably continue with impunity.

The work of human rights and environmental defenders in Ecuador, one of the world’s most biodiverse countries, is vital to the protection of critical natural ecosystems such as the Amazon rainforest and fundamental for the protection of democracy and the rule of law. The report finds that across the country, rights defenders face escalating violence, especially in situations of conflict linked to the extractive industries and the energy sector, which account for eighteen of the twenty-two cases presented in the report. Oil, mining, agribusiness, and the water sector are consistently the biggest drivers of attacks against rights defenders. With Ecuador’s new government set to ramp up natural resource extraction in the context of the global economic crisis of the pandemic and the country’s crippling debt to China and the International Monetary Fund, this worrisome trend risks only intensifying. 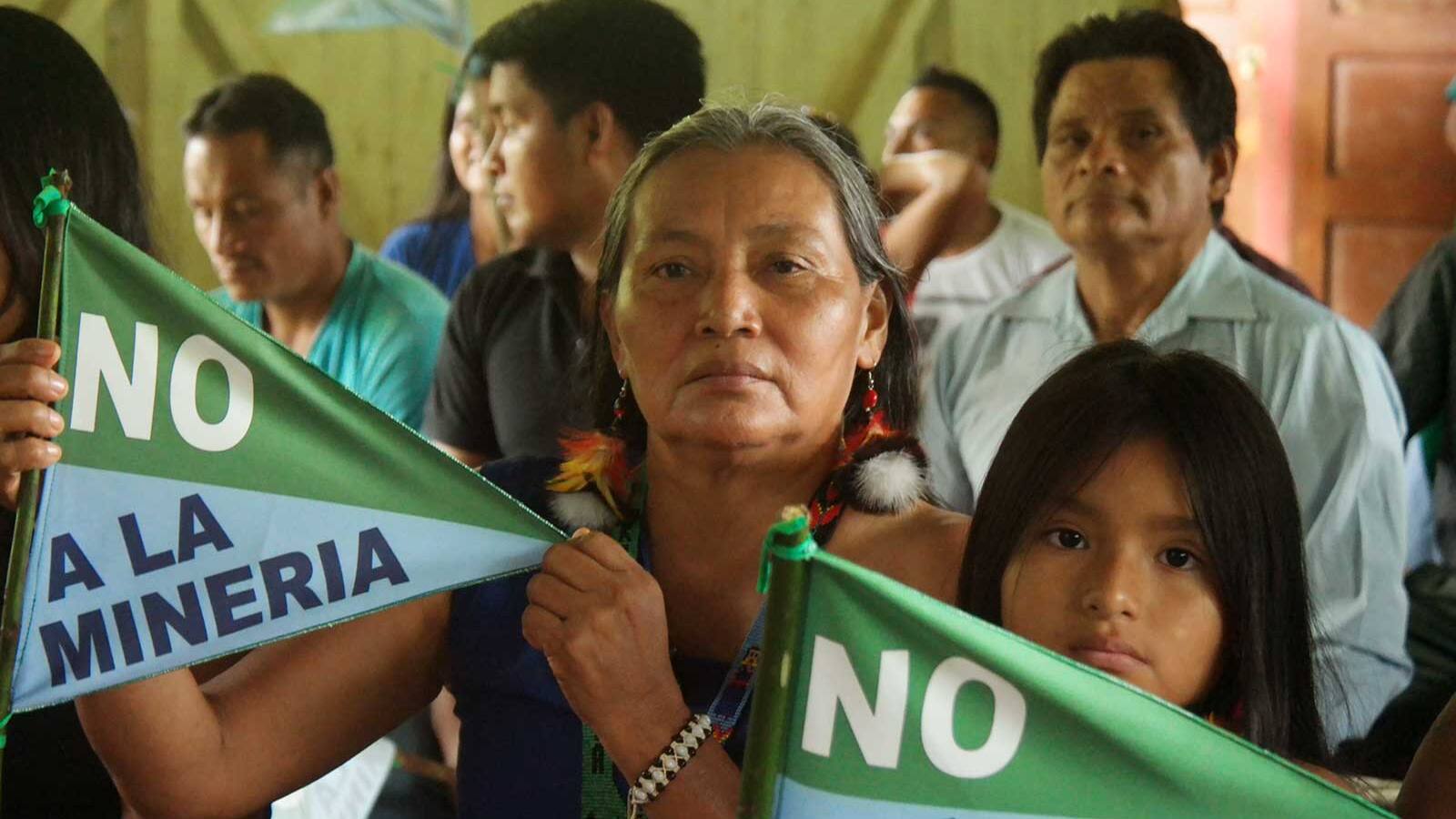 Shuar Arutam leaders such as Josefina Tunki face persecution for their work to protect their territory from mining, Ecuadorian Amazon. Photo Lluvia Comunicación 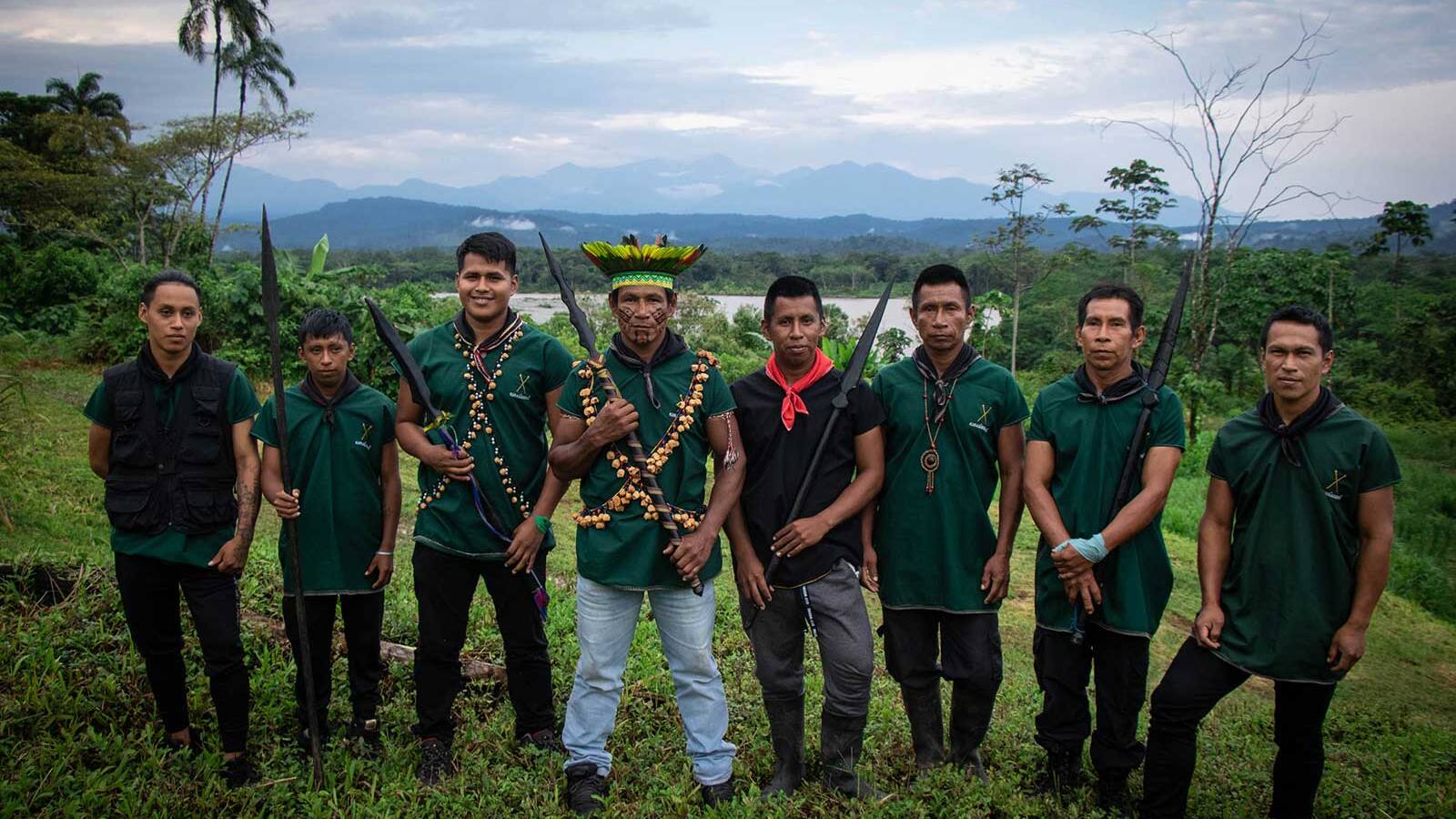 The Indigenous Kofan and Siona guardias face stigmatization against their legitimate work in defence of their territory and culture. 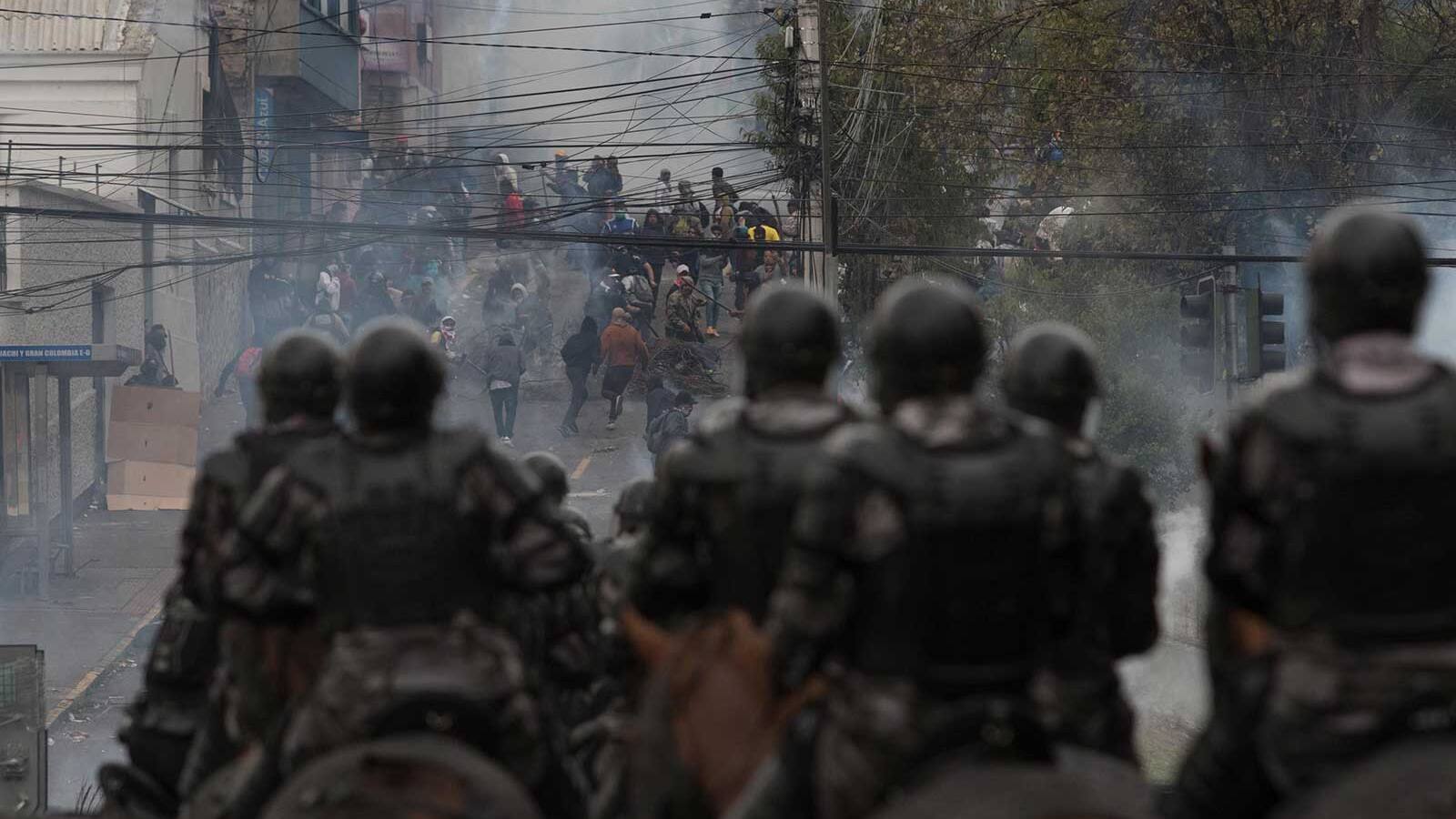 Indigenous leaders face criminal charges as a result of their involvement in the nationwide protests against the Ecuadorian government’s neoliberal policies in 2019. Photo Ivan Castaneira 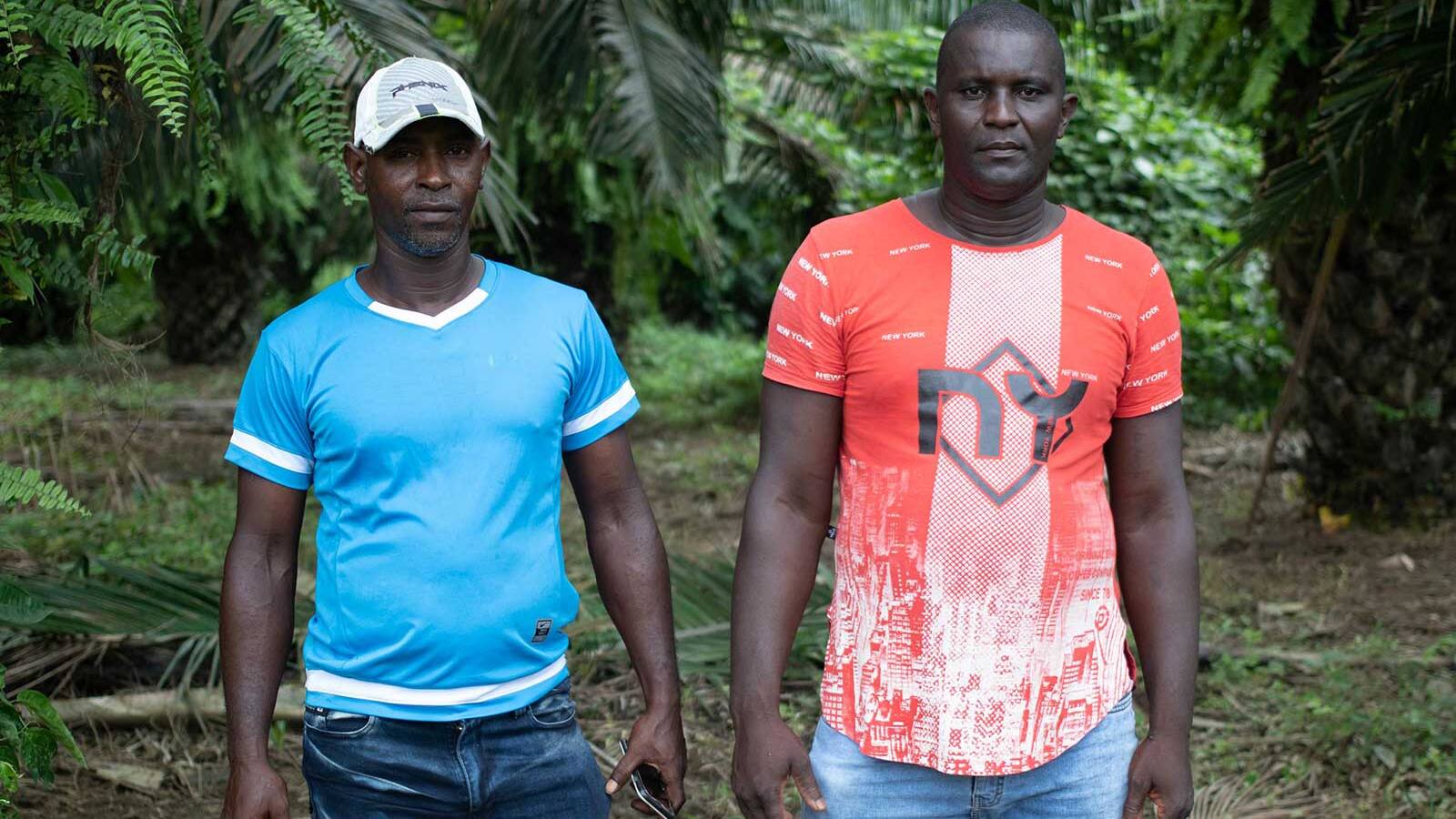 Rights defenders from Indigenous, afro-descendant, and montubios communities, and especially women, face disproportionate risks of violence. The majority of cases detailed in the report represent communities on the frontlines of resistance movements opposing extractive industries driving the climate crisis and the destruction of nature. Alarming instances of the government’s systematic violation of Indigenous people’s rights to prior consultation and Free, Prior, and Informed Consent (FPIC) are registered as part of the report, as well as violations to the right to environmental prior consultation by the Ecuadorian government in complicity with companies. These grave abuses against the rights and lives of historically marginalized and vulnerable communities, and the forests and rivers that they protect, undermine Ecuador’s pioneering Constitution that declares the country to be a plurinational and intercultural country, and grants rights to nature.

The cases presented in the report also demonstrate the Ecuadorian government’s flagrant failure to safeguard the vital and peaceful work of rights defenders and outlines the tactics employed by the government and industry to quash protests and weaken resistance movements, and maintain a legacy of corporate impunity, as devastatingly evidenced in cases in the Amazon rainforest. Stigmatization and even the criminalization of defenders through an abusive use of the justice system feature widely throughout the cases. The report demonstrates Ecuador’s non-compliance with signed treaties, pacts, and international instruments that guarantee the protection of rights defenders, such as the Declaration on Human Rights Defenders of the United Nations and the Escazú Agreement – an international treaty that includes the world’s first binding provision on human rights defenders in environmental matters.

Among the report’s chief recommendations are the urgent need for the Ecuadorian government to establish clear and culturally appropriate mechanisms of protection, reparation and non-repetition in cases of murder, threats, and intimidation that affect rights defenders and their families.

Ecuador’s Alliance for Human Rights intends for this first edition of the report to provide fundamental recommendations for the construction of a public policy to guarantee the work of human and environmental rights defenders, which has been under development by an inter-institutional roundtable under the leadership of Ecuador’s Ombudsmen since 2019. Over this period, high instances of State-led harassment, intimidation, violence, and criminalization against rights defenders have been recorded. This is most visible in the severity of the cases of Andrés Durazno (one of the three defenders murdered), the communities and defenders of the April 7th, 2020 oil spill, the Shuar Arutam People, and the defenders within the case of modern slavery against the company Furukawa, Buenos Aires, Explocen, and others.

“We continue to be persecuted for our work in defense of our ancestral territory. We face multiple threats; our territory is being contaminated by mining operations and our families are being divided by the companies. I have personally received death threats from the Vice-President of Solaris, a mining company with 26 concessions on our land. The government must listen to us. As Indigenous peoples, we have clearly said that we do not want to be consulted and that the mining companies must leave our territory. We defend our territory because it is our heritage and legacy. There are no other spaces to live. We fight for the good life of our grandchildren. We demand that our right to self-determination and life be respected.”

“Over a year has passed since a massive oil spill struck our territories. 27,000 Indigenous peoples are still without access to clean water and food. We feel outraged that the Ecuadorian judicial system has failed to recognize the violations to our rights and the damages caused to our lives, our rivers, and our territory. Our rivers are polluted, our children are sick, our food gardens are ruined, the fish have disappeared. The State and companies have not complied with their obligations. What’s more, oil operations are still contaminating our rivers and threatening our lives. There is no justice for Indigenous people. We will fight back.”

María Espinosa, Human Rights Lawyer from Amazon Frontlines and part of the legal team for Ecuador’s Alliance for Human Rights:

“Those of us who defend human rights defend a dignified life. We confront those who abuse power, including extractive companies, public officials, and members of the public force, as they seek to forcefully impose their agenda through coercion or rights violations. Our work poses a direct threat to their illegitimate authoritarianism, and they seek to undermine and dissuade our work. This puts us at risk. The Ecuadorian government has a concrete and urgent obligation to guarantee and protect our work as rights defenders.”

Elizabeth Durazno, Rights Defender from Molleturo community and niece of the late environmental defender Andrés Durazno who fought against a mining project in the Andes:

“The military entered our communities in Rio Blanco in 1995 during Rafael Correa’s government. Our rights have not been respected. Our territory has been destroyed and our families divided. But we continue to resist because we will not allow more rights violations. We continue to build solidarity with other human rights and environmental defenders across the world.”

Sofía Jarrín, Ecuador Advocacy Advisor at Amazon Watch, one of the 19 organizations part of Ecuador’s Alliance for Human Rights:

“Addressing the situation of rights defenders in Ecuador is urgent. There is no government protection for the lives of those who seek to defend rights and stop abuses of power. It is also inexcusable that attacks against 449 human rights defenders go unpunished. We want to build a more democratic society and create safe environments for the enforceability of rights in the country. This is the first step.”

Gabriela Fraga, Rights Defender and anti-mining movement leader from the community of Merced de Buenos Aires in the Andes:

“Criminalization against rights defenders is totally outrageous and unfair. Authorities use this tactic to try to intimidate us and to delegitimize our fight. These lawsuits drain our under-funded communities. In order to support our legal defense, we have to resort to playing bingo and selling food in order to generate the little funds we can.”